The Abdullahs have lived with lows and highs of history Three generations of The Abdullahs

Walking through the narrow paved lanes of downtown Srinagar in the summer of eighties, I met many anxious Muslim women, who were force-feeding tahri - the rice cooked with turmeric, and salt and tempered with mustard oil – to strangers. They were distributing Tobruk (offering) as an act of piety to ask the Almighty for the speedy recovery of their Baeb, father in the Kashmiri language. Baeb, Yes, that is what Sheikh Mohammad Abdullah, a tall man with ever taller political stature, was to the people of the Valley. This hero worship was not just a personality cult but a heartfelt tribute from lakhs of people whom he had extricated from acute poverty, hunger, and slavery under the feudal system with the stroke of a pen.

Sheikh Abdullah’s land reforms in Jammu and Kashmir remain an unmatched phenomenon and the first of its kind in India – Pakistan is yet to abolish the age-old feudal system and the practice of large landowners exploiting tillers. The single move by a young Wazir-e-Azam (Prime Minister as the Chief Minister of J&K was called back then) Sheikh Abdullah changed the lives of lakhs of Muslims. While the landowners were both Muslims and Hindus, the tillers were only Muslims. This singular social change was carried out without any resistance or bloodshed and even compensation to the Zamindars under the charismatic Sheikh Abdullah. 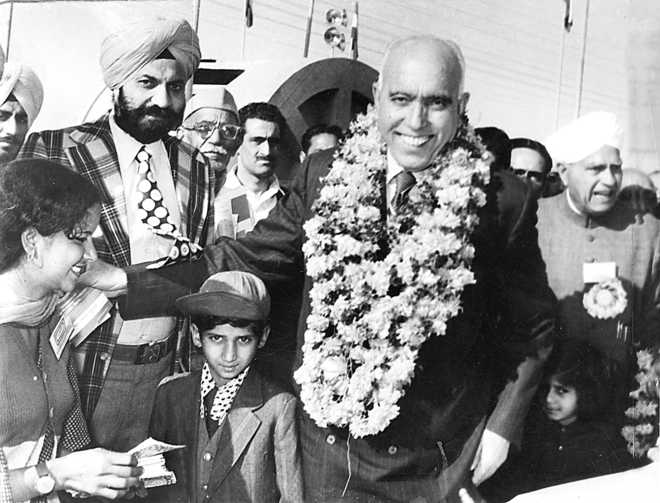 This single act made the Abdullahs three generations rule over J&K even in the present democratic setup. However, the family has risen from humble origins. Sheikh Abdullah was born as the youngest of the six children of a shawl merchant of Soura, then a village on Srinagar outskirts on 5 December 1905. He was born two weeks after his father’s death and thus raised in relative poverty. He attended a local maktab and then to get a better education, he chose to walk miles each day to attend a school in Vicharnaag. His exposure while doing graduation from Lahore (Punjab University) and later M.Sc Chemistry, from Aligarh Muslim University (AMU) shaped his political thoughts.

ALSO READ: The Madanis have dominated religion, politics for 100 years

After completing his education, the Sheikh returned home. Now, the young and highly exposed Abdullah was keen to change the lives of people in Kashmir. At that time, there was a secret group called “Reading Room”, a camouflaged political resistance group set up by a few educated Kashmiri youth against the reign of Maharaja Hari Singh, the father of veteran Congress leader Dr. Karan Singh. Back then, political activity or mobilization of people was banned by Maharaja and yet these youth would meet quietly and discuss the ways to get people out of an unjust feudal system.

Abdullah however, got official permission to set up “Fateh Kadal Reading Room” in the house of a local wealthy man. This group became the precursor to today’s J&K National Conference Party led by his son Farooq Abdullah and grandson Omar Abdullah.

He formed the Muslim Conference in 1932 that later, under the influence of national leaders like Jawahar Lal Nehru, a fellow Kashmir to whom Abdullah was emotionally attached was renamed as the J&K National Conference. The name change projected National Conference as a secularist in and in sync with the progressive thought. 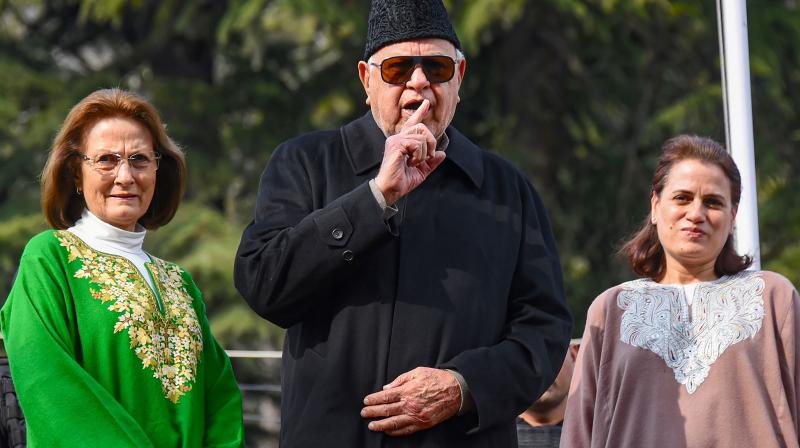 The bright educated young man Abdullah was fancied by Michael Harry Nedou as a match for his daughter Akbar Jehan. The two were married in 1933. Akbar Jehan’s mother was a Kashmiri Muslim; father a European. She was raised with the values of both and had the best of both worlds. She was educated and believed in the rights of women while at the same time remaining a devout Muslim. Theirs was a perfect match though the petite Akbar Jahan took up the responsibility of introducing education among women and became a liberal face of Muslims to be emulated by the people. She was a two-time Member of Parliament.

The Nedou family continues to have its presence in the Valley through their hotels in Srinagar and Gulmarg even though most of its progeny have gone abroad.

The couple had five children of whom Farooq Abdullah is the most recognizable face across the world. Their eldest daughter Khaleda Shah was married to Ghulam Nabi Shah, a bright administrator who bore a grudge against the patriarch for choosing Farooq over him as his successor. Shah later took revenge by hobnobbing with the Congress party and toppling Farooq Abdullah’s government in 1984. He was the chief minister for a short duration. Khaleda's son Muzzaffar Beg is on the periphery of Kashmir's current political scene.

Sheikh Abdullah and Begum Akbar Jehan’s other daughter Suraiya Mattu became an educationist and her family has stayed away from politics and the limelight.

Their other sons Tariq and Dr. Mustafa Kamal have remained single and never married. While Tariq Abdullah was a loner and passed away, Dr Kamal has served as minister in his brother’s cabinet and is also spokesperson of the National Conference. More importantly, he lives in the tourist resort of Tangmarg, north Kashmir, and practices medicine among the local people. He is quite popular and has never lost an election from the constituency. 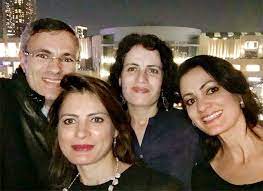 Farooq Abdullah is a medical doctor who studied from Jaipur. At the time of his father’s failing health, he returned from London with his wife Mollie, an English woman who worked as a nurse, and four children. The Sheikh handpicked Farooq as his successor, ironically, much like the King whose rule he had opposed. Farooq Abdullah was sworn as chief minister after his father’s death in 1982.

Dr Abdullah emerged as one of the most effervescent politicians on the scene. While Sheikh Abdullah had to consciously change his party from Muslim Conference to National Conference to don a secular mantle, Farooq was a living example of the changing times and inclusive lifestyle. His wife Mollie is a Roman Catholic, his second daughter Hina is married to a Christian of South African lineage while their youngest child Sara Abdullah is the wife of Congress leader Sachin Pilot. Safiya, the eldest of the sisters lives in Kashmir and is married to a local technocrat.

His son Omar Abdullah became the youngest chief minister of Jammu and Kashmir. Father of two sons from his since estranged wife Payal Ram Nath, Omar was even a minister in the Atal Behari Vajpayee’s government and the PM seemed to be very fond of him. He served as Chief Minister of J&K and his tenure is not remembered for any significant change.

Sheikh Abdullah's political life was full of turmoil as it was unfolding at a time when India and Pakistan were sparring and even fought a war over Kashmir. As the Sheikh’s metamorphosis from a leader of the Muslim Conference to leading an inclusive National Conference, M A Jinnah’s two-nation theory didn’t strike a chord with him. National Conference became the biggest hurdle in the Muslim-majority state becoming part of the newly created Pakistan. 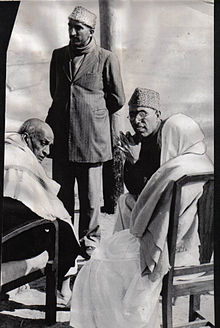 After Pakistan sent tribesmen mixed with Army regulars to attack Kashmir in October 1947, Sheikh Abdullah galvanized the people into raising a self-defense force comprising both men and women. The citizen’s militia raised the war cry of ‘Hamlavar khabardar! Ham Kashmiri hain tayyar! Jo ham say takrayega, pash-pash ho jayega.’ (Beware, warmongers! We Kashmiris are ready to fight you and throw you out).

The militiamen and women wielding guns and lathis would stage marches in Srinagar’s streets to instill confidence among the people. Begum Akbar Jehan and other women looked after the families who had been displaced by the tribal raider orgy of violence. Abdullah’s resistance to raiders helped in raising Kashmiri nationalism in the Valley at one of the most difficult moments of its history. At the turn of events would have it, after signing the instrument of accession with India, Maharaja Hari Singh was banished from Kashmir and Sheikh Mohammad Abdullah was appointed the head of the Emergency government. He also presided over the Constituent Assembly that drafted the since abolished Constitution of J&K. The Sheikh ruled J&K for three terms.

The Abdullahs have loomed large on the political and social horizon of Kashmir for seven decades. However, it was not always a favorable situation for them. Abdullah was the victim of Pakistan-engineered machinations in Kashmir when he was a suspect in the eyes of Delhi. Did he hobnob with Pakistan to break Kashmir from India? Anyways, in 1953, his government was dismissed on this allegation and he was detained and accused of a conspiracy. 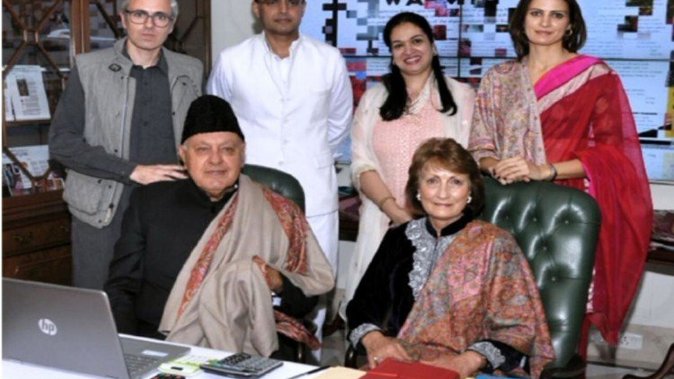 Subsequently, he was released in 1964. Nehru and Sheikh reconciled their differences and Sheikh Abdullah was sent as an emissary to Pakistan to sort out the Kashmir issue with the then Martial law administrator General Ayub Khan. Destiny had some other plans; while the Sheikh was in POK, Nehru died his mission remained unfinished.

Sheikh remained a suspect in the eyes of Delhi till Indira Gandhi finally worked on a reconciliation plan. Much water had flown down Jhelum and Pakistan had become weaker with Bangladesh breaking free of it. This development had dampened the morale of the secessionist elements in Kashmir. The Sheikh returned to power with a bigger halo and more support from the people. Now the people called him Sher-e-Kashmir (The lion of Kashmir).

No wonder when he died, a sea of mourners was on the streets. The generations that came later and were raised in affluence and food security have no idea of how the Sheikh changed the destiny of their ancestors. He is buried close to the Hazratbal shrine on the shores of Dal Lake. Once again, his party is faced with an existential threat with the status of Jammu and Kashmir changing and it becoming an equal part of the domain of India. Despite controversies surrounding it, the Abdullahs continue to remain the first family of Jammu and Kashmir even today.