Home Minister Amit Shah today praised Prime Minister Narendra Modi for setting high standards for people in politics by maintaining silence against a spate of allegations against him and cooperating with the legal processes and investigations in multiple cases of alleged involvement of his government in the 2002 Gujarat riots.

“I have seen his pain at being hurled wild allegations at and yet choosing to remain silent for 19 years,” he said in an interview to Smita Prakash of the Asia News Internationa (ANI). He spoke after Supreme Court ruled that there was no evidence of the then Gujarat government’s (Headed by Narendra Modi) colluding with the rioters on the plea of Zakia Jafri.

Shah took the opportunity to take jibes at Congress Party for protesting against ED questioning Rahul Gandhi in the National Herald case. Shah said that Narendra Modi as Gujarat Chief Minister appeared before the SIT for the probe over the post-Godhra violence but the BJP did not resort to drama or dharna during the questioning.”

“In a democracy, PM Modi presented an ideal example of how the Constitution should be respected by all political persons. Modiji was also questioned, but nobody protested, and (BJP) workers from across the country did not gather in solidarity with Modiji. We cooperated with the law. I was also arrested. There was no protest or demonstration," he said.

He claimed the SIT to probe on the plea filed by an NGO asking for probe into the allegation of government abetting the riots, was ordered by the Supreme Court after the Modi government gave its consent through the counsel. “It was a consented order, for we knew there is nothing for us to hide.” 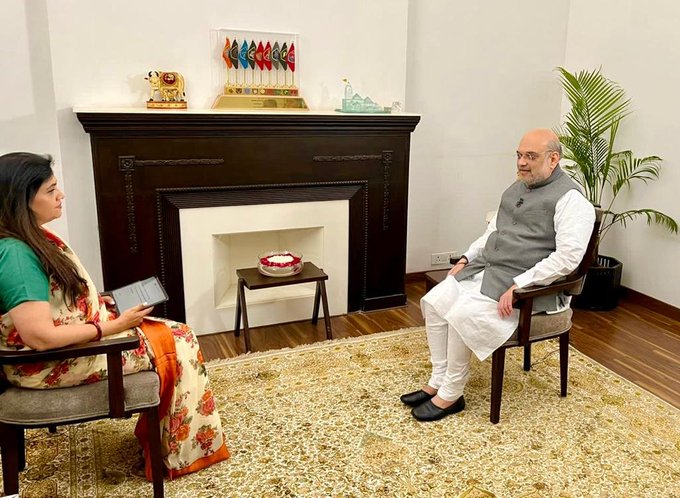 He blamed BJP’s political rivals, a few journalists with ideology and  some NGOs for hatching a conspiracy to malign Modi by leveling false allegations and then publicizing these to the extent that these started being seen as the truth.

Amit Shah also referred to his facing arrest in Sohrabuddin Sheikh fake encounter case, in which he was subsequently acquitted, and said no "dharna" was carried out.

"This is not the first clean chit to PM Modi. Nanavati Commission has also given a clean chit. Still the SIT was formed. And Modiji did not appear before the SIT doing drama... come in support from every village if not then call MLAs, MPs and ex-MPs, hold dharna," Shah added in a jibe towards the Congress party's decision to hold demonstrations in national capital during Rahul Gandhi's questioning by the Enforcement Directorate in the National Herald case.

"We believe that we should cooperate in the judicial process. There was a Supreme Court order, and an SIT was there. If the SIT wants to ask questions from the Chief Minister, he himself said that he is ready to cooperate. Why stage a protest? No person is beyond the law," he said.

Shah said that protest against the judicial process cannot be justified.

"No protest is justified against any judicial process because our view is considered right when the judiciary says so. I was put behind bars. I used to say that I am innocent. But when the court said that a fake case was filed against me and there was a politically motivated conspiracy by the CBI to frame me, then my words proved right," he said.

A Supreme Court bench headed by Justice AM Khanwilkar said on Friday that it found the appeal by Zakia Jafri was devoid of merit.

"After cogitating over the matter, we uphold the decision of the Magistrate in accepting the stated final report dated February 8, 2012, submitted by the SIT, as it is and rejecting the protest petition filed by the appellant. We do not countenance the submission of the appellant regarding infraction of rule of law in the matter of investigation and the approach of the Magistrate and the High Court in dealing with the final report. Accordingly, we hold that this appeal is devoid of merits and resultantly, deserves to be dismissed in the aforementioned terms. We order accordingly," the bench said in its judgement.

Ehsan Jafri was among 69 people killed during the violence at the Gulberg Society in Ahmedabad on February 28, 2002. Zakia Jafri challenged the SIT's clean chit to 64 people including Narendra Modi who was the Gujarat Chief Minister during the riots in the State.

Answering a query on the Gujarat government's response after the riots and how he would have dealt with the situation if he was the state Home Minister, Amit Shah said "whosoever was there, they had worked well."

"But the anger was on such a large scale due to the (Godhra) incident, which could not be sensed by anyone including the police."

Amit Shah said the court has made it clear that the state government tried hard to stop the riots and the Chief Minister made repeated appeals.

He said the court had noted in its judgement that incidents after the Godhra violence were not pre-planned.