Bengal FM alleges not allowed to speak at GST meet 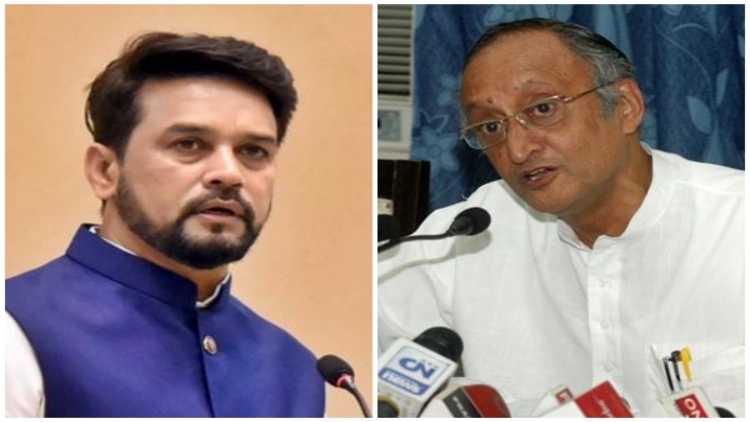 Following the conclusion of the 44th meeting of the GST Council on Saturday, a war of words erupted on Twitter between Union Minister of State for Finance, Anurag Thakur, and West Bengal Finance Minister, Amit Mitra, over the way the important meeting of the state and Central Finance Ministers to decide on GST rate for Covid relief items was conducted.

In his tweet, Mitra accused the Centre of completely ignoring his voice at the meet, forcing him to take the unprecedented step of recording his dissent by letter.

In his tweet, Mitra said: "GoI led the anti-people move & IMPOSED GST on VACCINE, MASK, hand sanitizer, OXYGEN, PPE, oxymeter, Covid test kit, Remdesivir, RT PCR machine… Since my voice was IGNORED, I have recorded my DISSENT by letter. Unprecedented. Slow death of the only body of cooperative federalism."

Thakur reacted through his own series of tweets, the first of which said: "There is a letter circulating in some sections of the media by Sh @DrAmitMitra Ji, FM West Bengal. I would like to set the record straight; the facts are as follows:

"In my over two years of attending the GST Council, I have never seen FM @nsitharaman ji cut off anyone during the Council discussions.

"She has patiently given each & every speaker as much time as they needed, even if it meant discussions went on for long hours."

His tweets over the matter further said: "During the GST Council discussions today (June 12), it seemed as if the Finance Minister from West Bengal did not have a stable VC connection.

"Revenue Secy repeatedly informed him his line was breaking, that he was not properly audible & to turn off his video for better connectivity."

Thakur further said that during the speech made by the Uttar Pradesh Finance Minister, nobody heard Mitra speak up, nor did he ask to have his opinion heard.

"Other members can attest to this. At the end of the discussion, when FM @nsitharaman ji asked the Council whether anyone would like to speak & add their comments, Dr Mitra ji again remained silent and did not speak up," Thakur tweeted, countering Mitra.

He further said that the Finance Minister has never stifled dissent in the GST Council while suggesting that it is unbecoming of a senior member of the Council to suggest that this has happened.

"The GST Council embodies the collective spirit of all states towards debate in a healthy manner; it has been & shall continue," Thakur said in a tweet.

The 44th meeting of GST Council was organised on Saturday to consider the recommendations of the Group of Ministers (GoM) set up to decide on the GST rate for various Covid relief items.

Based on its recommendations, the council reduced GST rate on a host of medical equipment and goods from 12 per cent to 5 per cent while bringing the duty level to nil for medicines used for the treatment of black fungus.