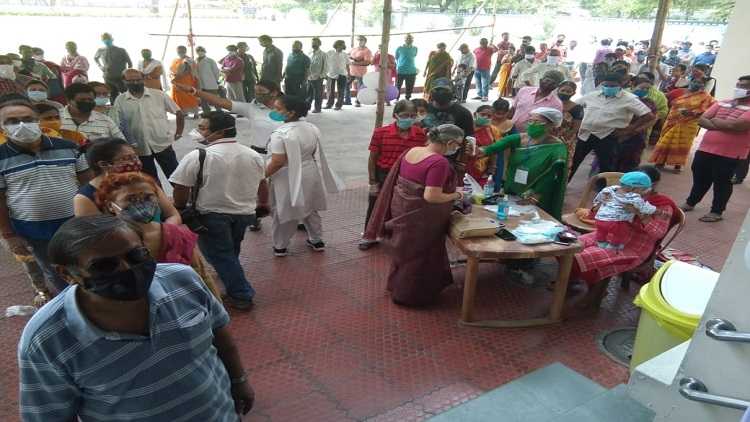 West Bengal saw 78.36 per cent voter turnout till 6.30 pm in the fifth phase of the assembly election on Saturday.

Jalpaiguri recorded the highest turnout with 81.71 per cent, while Purba Bardhaman and Nadia registered 81.67 per cent and 81.50 per cent.

A total of 319 candidates, including 38 women, contested in this phase.

Among the 45 constituencies, Maynaguri reported the highest turnout of voters at 85.65 per cent while the Matigara-Naxalbari constituency recorded 81.65 per cent and Barasat recorded 77.71 per cent. Bidhanagar saw 61.10 per cent of voters and Siliguri 74.83 per cent turnout.

The Election Commission (EC) had invoked powers under Article 324 to curtail the timing of the campaign to curb the spread of COVID-19, extending the silence period to 72 hours for the remaining three phases. The fourth phase of polling had seen violence in which five persons were killed.

Few minor incidents were reported in the fifth phase election on Saturday.

Aftab said a country-made firearm was recovered from booth number 44 and 45A in Ranaghat. Police have seized the firearm and an independent candidate Kaushik Bhaumik has been arrested.

"In Ranaghat, a man was attacked and he suffered an injury in his left leg was injured. He has been admitted to Shantipur State General Hospital. His condition is stable and three people have been arrested in this regard. Another man's house was damaged in Ranaghat. Two people have been detained," he added

However, the Barasat Superintendent of Police (SP) wrote a letter to the Special Police Observer in West Bengal, saying that the allegation of blank firing in the Deganga constituency "is found to be not based on facts".

A minor scuffle between the Bharatiya Janata Party (BJP) and Trinamool Congress (TMC) supporters was earlier reported at Bidhannagar.

TMC candidate Sujit Bose blamed the BJP workers. "Two of our people were injured in stone-pelting by BJP supporters at booth numbers 265 and 272. We have informed the election observer and police. The situation is normal now," Bose told media.

The convoy of BJP candidate from Kamarhati, Raju Banerjee, was also allegedly attacked during the fifth phase of voting

On the day of polling, the BJP and Trinamool Congress sparred over a purported audiotape of a conversation between Chief Minister Mamata Banerjee and TMC candidate Partha Pratim Ray. It was released by BJP.

A BJP delegation met the Chief Electoral Officer (CEO) in Kolkata requesting the Election Commission to constitute a Special Investigation Team (SIT) for probing the purported audiotape of Banerjee, in which she can be heard telling the TMC candidate from the Sitalkuchi constituency to hold protests with bodies of the four killed in Cooch Behar violence.

TMC said it was "illegal and unlawful recording" and blamed the BJP's "dirty tricks department" for the audio tape.

A TMC delegation called on the Commission to take necessary action.

The voting for the sixth of the eight phase election in the state will be held on April 22.