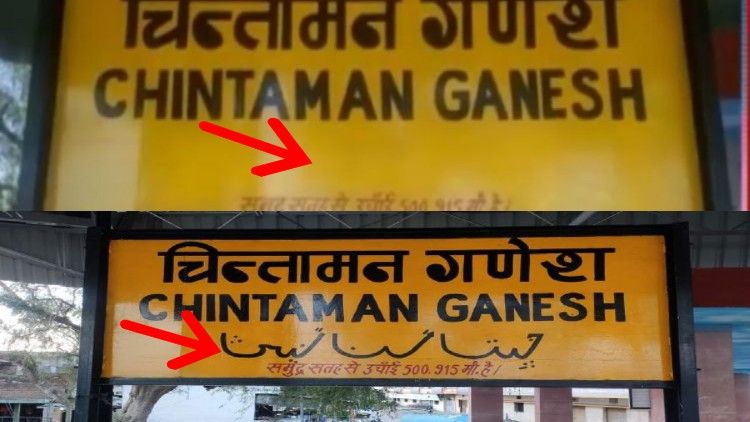 The after and before signboard at Chintaman Ganesh railway station

Ujjain one of the biggest cities of Madhya Pradesh, famous for the Hindu temple of Mahakal is in news for a different reason: the name of the station written in the Urdu language vanished within a few days of its appearance. on the signboard

The signboard in Urdu was of the newly built Chintaman Ganesh railway station in Ujjain was overnight painted in yellow.

The erasing of the Urdu name followed a protest by Sant Mahamandaleshwar Acharya Shekhar,  in charge of a local temple over usage of Urdu.

Acharya Shekhar is known for his controversial statements. On seeing the name of Chintaman station written in Urdu  alongside Hindi and English, he threatened to launch an agitation against this. He said the language (Urdu) “is used by people of Jihadi tendency.”

His diatribe didn’t stop here. He said, "Urdu is the language of the Mughals. It will not be tolerated. Unnatural language should not be used. There is a need to be careful with this. "

After paining the Urdu sign with a coat of yellow paint soon after the Railway authorities said, “Urdu had been used by mistake.”

Railway Stations across the state follow the guideline to write the names of stations in Hindi, English and Urdu. However, in Ujjain, it can be written only in Hindi and English. The newly built station in Ujjain is named after Lord Chintaman Ganesh. This is the first station on the way to Fatiabad from here. Chintaman Ganesh temple is a popular sport in the city.

Devotees visiting Mahakal temple also pay a visit to this temple. The station, located six km from the main station of Ujjain, is not fully operational and it has already come in news for the wrong reasons.

Urdu aficionados are outraged by the Railways succumbing to the bullying by some people and erasing the signboard in Urdu. Urdu is not related to any religion. Javed Alam, who translated Urdu columnist and writer Shamsul Islam's book Muslim Against Partition, said, "Both Hindus and Muslims are equal partners in Urdu.  Both the communities worshipped it. "

He told, "In the 400 years history of Urdu, both Hindus and Muslims contributed to the growth of this language.  However, Urdu was projected as a language of religion by vested interest in 1945 when the first demand for partition was made. Urdu was misused for the purpose.”

Apart from this, thousands of Hindus and Muslims have contributed to the growth of this language that developed in India. He warns against the poisonous mentality that seeks to impose Urdu on Muslims and calls it the language of Muslims.

Poet Vijay Tiwari believes that Urdu is not the language of a particular religion. "Languages belong to anyone; people who say Urdu is the language of Muslims want to create a wall between people.”