Baishali Adak/New Delhi: Shabnam proudly holds up a greeting card that has an intricate Christmas tree silhouette cut out on a red sheet against a green one. The ones that lie next to her feet with carved snowflake patterns on them are worth marveling at.

You would think that such creative pieces could come from brands like Archies only, but these are the handiwork of 10-odd women working at Insha-e-Noor, an initiative of the Aga Khan Trust for Culture (AKTC), in Nizamuddin Basti of south-east Delhi. 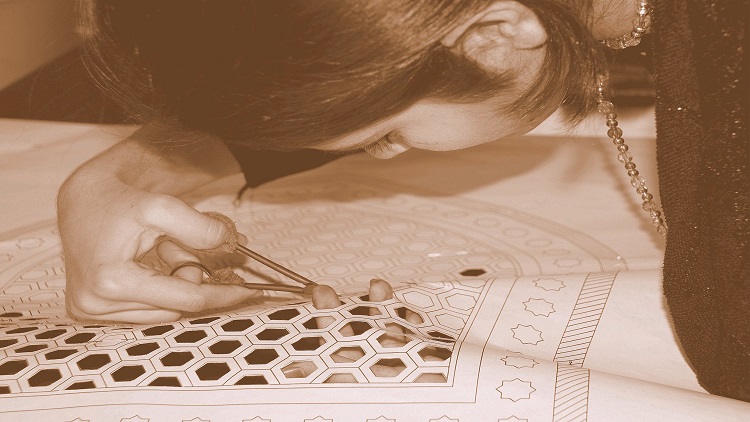 It’s an old, plaster-worn building called ‘Mashaq Manzil’ where these Muslim women, and their colleagues, find wings to their imagination. As part of its ‘Historic Cities Programme,’ the AKTC set up a training centre in arts and crafts for unemployed women here in 2010. This is the area where AKTC has conserved around 60 medieval-era Islamic monuments like the Humayun’s Tomb Complex, Sunder Nursery tombs, Mazar-e-Ghalib and Subz Burz in a pact with the Archaeological Survey of India (ASI).

What started as barely five women coming for classes in stitching and tailoring soon blossomed into five active hubs of Aari embroidery, Sanjhi paper craft and the French knitting style of crochet. Today around 100 women are engaged here in creating fashionable pieces of craft and making a decent income for themselves. 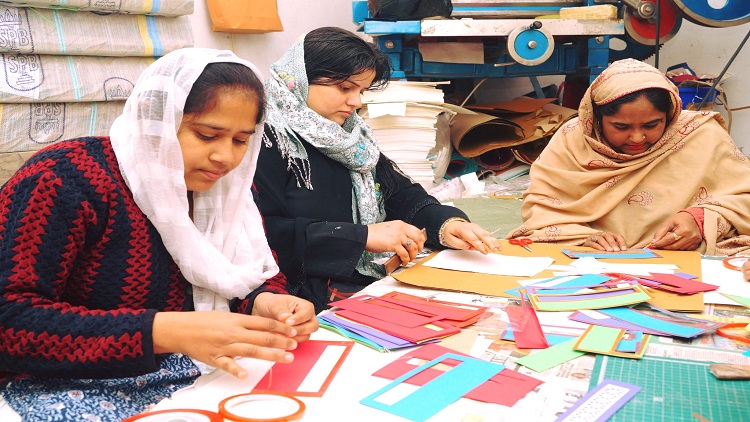 “When I started coming here in 2010, I knew nothing about Sanjhi. AKTC had deployed some really nice teachers who told us about the history of Sanjhi, how it originated in Mathura (Uttar Pradesh) and was dedicated to Kanhaiya ji. Gradually, we learnt the scissor work and adapted patterns from our Mughal monuments to make Sanjhi our own. Now, we love it,” said 50-year-old Shabnam Shaheen, a member of Insha-e-Noor and mother of three.

‘Insha-e-Noor’ itself means ‘creation of light.’ Years back, when this women’s livelihood project was being established, experts at AKTC felt that their textile and crafts designs should borrow from the patterns on the Nizamuddin monuments. 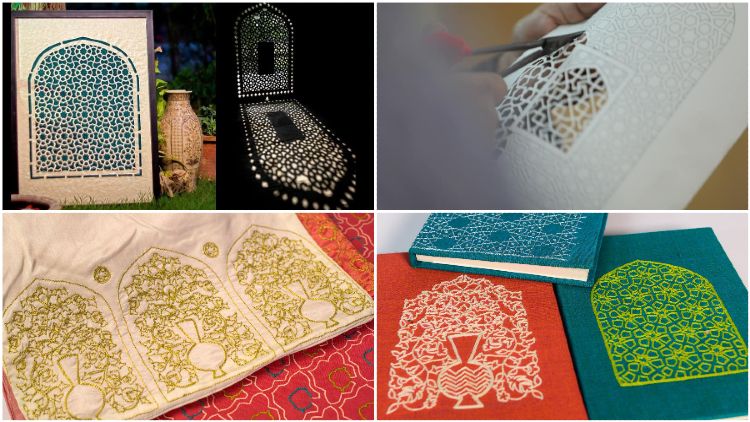 AKTC has conserved 60 monuments in the area like Humayun's Tomb. Patterns on them like the jaali are recreated on various products

“The purpose is to take the culture and heritage of the area forward. For instance, Jaali (lattice) is an important part of Islamic architecture. So, we thought that while our master craftsmen work on stone jaalis on the shrines we are conserving, the women can make paper and thread jaalis. That’s what the Sanjhi, Aari and crochet girls do. These can then be turned into contemporary products like notebooks, bookmarks, wall accents, bags, stoles, etc. for sale,” explained Jyotsna Lall, director of programmes, AKTC.

The Insha star logo itself is inspired from a motif on the Atgah Khan Tomb (burial place of an advisor in Akbar's court) in Nizamuddin. A flower pot design on Rahim's Tomb (Akbar's commander-in-chief) is popular on Insha-e-Noor diaries, while a pattern on the Bu Halima Gateway (said to be one of Humayun's wet nurses) features prominently on the cover of their notebooks. 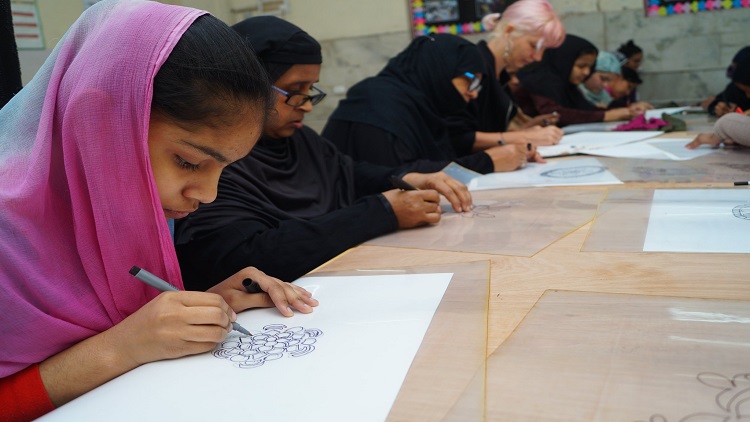 Gifts for all seasons and reasons

Speaking on how they ventured into their new “festive range” comprising Christmas, Diwali and Rakhi products last year, Swati Batra, said, “The pandemic in 2020 affected our business badly. The usual spots where we sell our products -- a kiosk in Humayun’s Tomb, Diwali melas and embassy fairs -- were all shut. Our turnover came down from around Rs 45 lakh in 2018 to few thousands only.” Batra is programme officer at AKTC's Nizamuddin Urban Renewal Initiative (NURI).

“We realised that even if people don’t splurge lavishly anymore, they will certainly celebrate festivals and buy the related goods. Also, e-commerce is booming, so we can make these products, advertise them on Facebook and Instagram, and courier them to wherever orders come from,” said Ratna Sahni, IEN programme coordinator and centre-in-charge. 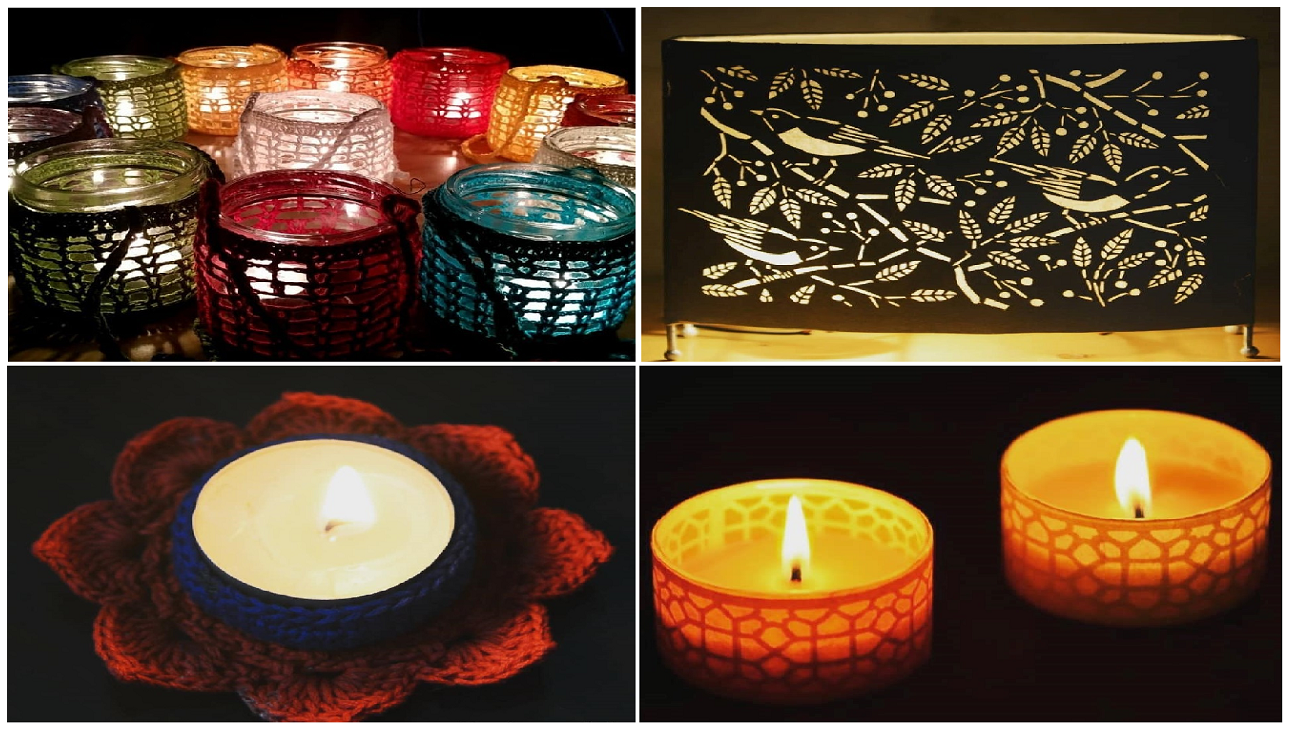 40-year-old Seema Ali, head of the crochet section, said, “I myself made about 300 rakhis, all in different colours and designs like flowers and beads. In total, I think Insha-e-Noor sold 1,200 crochet rakhis and it was a major source of income for us at a time when even our husbands were sitting at home. Interestingly, I learnt something new about the Hindu culture, that there’s a ‘Bhabhi Rakhi’ or ‘hanging Rakhi.’ We made those too.” 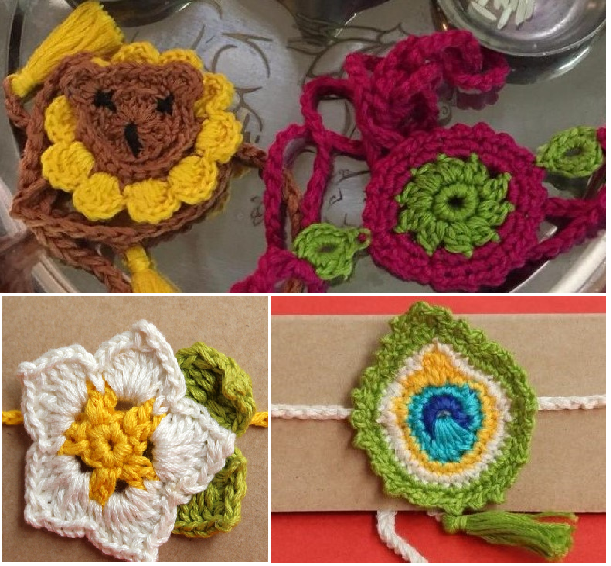 Crochet rakhis made by the IEN craftswomen. IEN sold about 1,200 rakhis for Rakshabandhan

24-year-old Parveen of the Aari section said these products also reflect the “secular ethos of Nizamuddin.” “The majority Muslims, and minority Christians and Hindus, of this area live peacefully under the watch of (Sufi saint) Hazrat Nizamuddin. In fact, women of all faith work at our Insha-e-Noor centre. We have lunch together and even gather at each other’s home when there’s a big order to be finished,” she said.

The ‘festive range’ was besides around 15,000 face masks that the Insha group made. For many of these women, some of them divorced or suffering medical problems, Insha-e-Noor is their only source of income. For others, it is their sole window to the outside world. 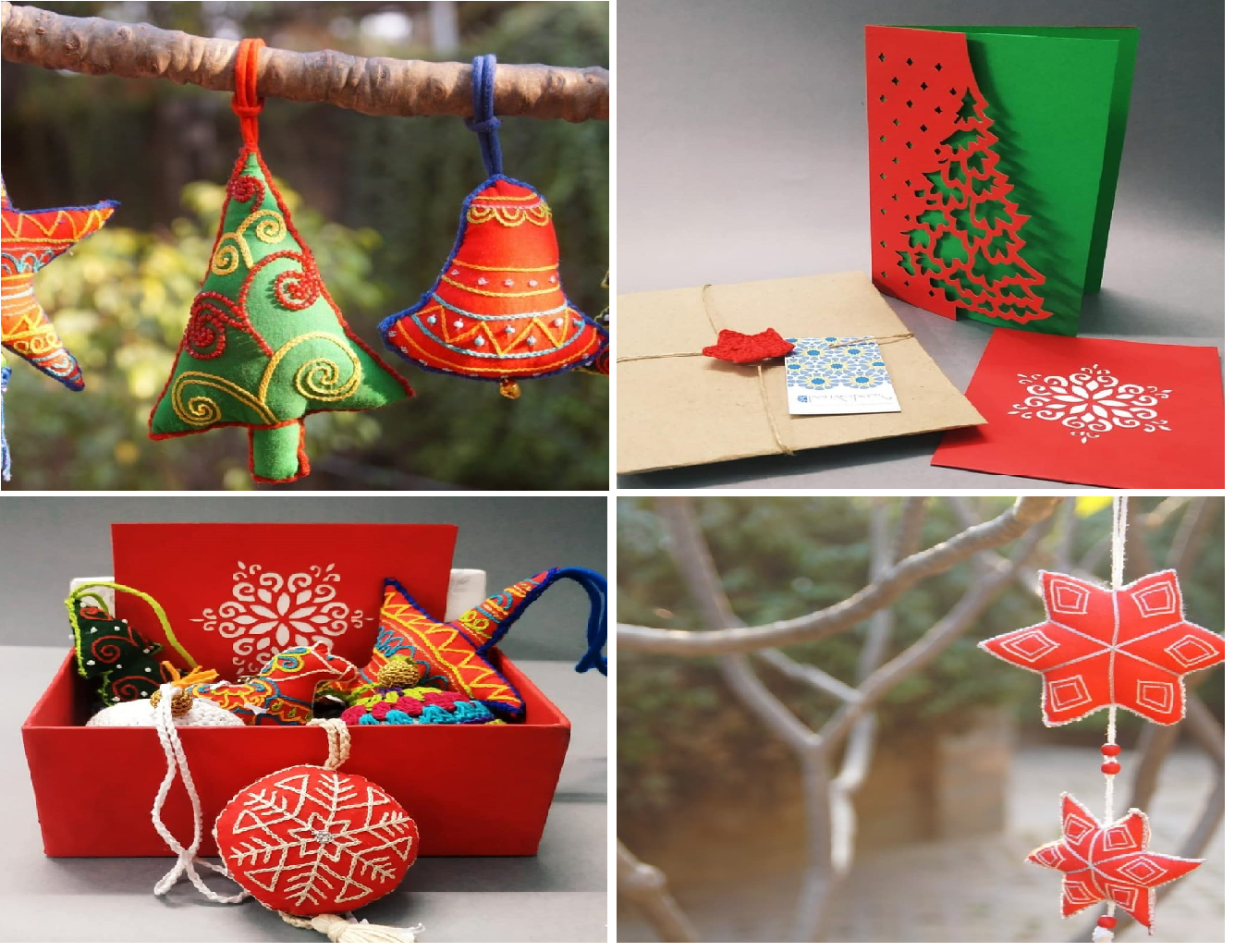 “Earlier, I was not allowed to step out of home. I had never even ventured to Bhogal (a colony neighbouring Nizamuddin). There were also family objections to joining the AKTC centre initially, but now I and my colleagues travel to far-off places to source raw material and marketing,” said 23-year-old Humaira Khan, who had dropped out of school as a child.

Her colleague of the same age, Subhana Abbasi, purchases spectacles and medicines from the money she earns at Insha as she has an eye disability. She said, “We just keep asking for dua (blessings) from Allah that we should get more work of all kinds.” 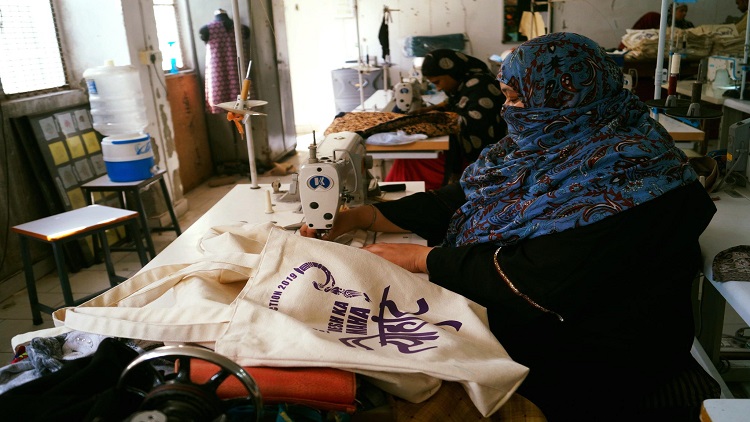 The Election Commission of India is a client of IEN. A woman making bags that read: 'Desh Ka Tyohar, Election 2019'

After being in existence for 10 years, Insha-e-Noor got registered as a private limited company in 2019. AKTC got 30 of the 100 members registered as shareholders and 11 as directors. This is in preparation of AKTC’s exit from Delhi as the Nizamuddin Urban Renewal Initiative project is almost complete. 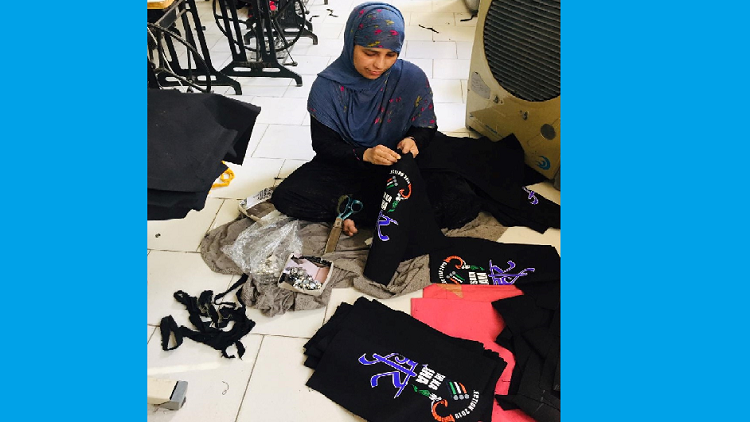 Swati Batra, programme officer, AKTC, said, “We are trying to make the IEN group 100% self-dependent for future. They already have big brands like Fab India, Indigene, Rangsutra and the India Habitat Centre as their clients. They should be able to manage their R&D, marketing, advertising and accounts by themselves. We are proud of the fact that they are now not just workers, but owners of their company.”