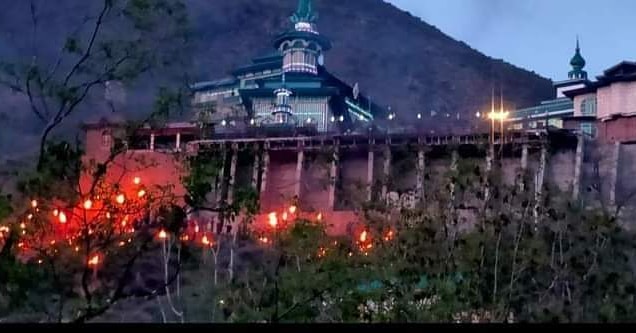 A view of Zain-din Wali shrine on Zool Festival

Hundreds of devotees thronged the holy shrine of Hazrat Zain-din Wali in Aishmuqam where they observed the traditional 'Zool' (illumination) festival.

The centuries-old tradition of burning 'mashals' (wooden torches) popularly known as 'Zool' was observed with zeal and reverence in the historical shrine of Hazrat Zain-din Wali in Aishmuqam in Anantnag district of south Kashmir, people in large numbers, gathered in the village and took out the mashal procession.

The ritual is performed by devotees as a mark of respect for the saint and is symbolic of the beginning of an agricultural activity after a prolonged winter season. The shrine is situated on a hillock and on Friday thousands of devotees thronged it.

While talking to media persons, a member of the shrine committee Shahnawaz Ahmad said, "There is an interesting story behind the tradition of burning mashals every year on this day."

He said, according to the belief, during the rule of Ashushah Badshah in Aishmuqam many centuries ago, a demon had terrified the villagers. Then one day the villagers approached the demon and requested him to eat them one by one. The demon agreed but in turn, the villagers were supposed to provide him food each day.

When it was the turn of a young orphan Gujjar boy named Bumisad, he challenged the demon and asked him to fight with him. The fight continued for a week and one night the villagers were overjoyed to learn that Bumisad had killed the demon.

To celebrate his victory, people assemble every year and light up their wooden torches and oil lamps.

Since that day the tradition is observed with fervour. It is one of the important festivals and people from across the valley throng the shrine.

Many tourists and Local army officers also participated in this Zool or Mashaal festival. The devotees prayed for the peace and prosperity of the country.