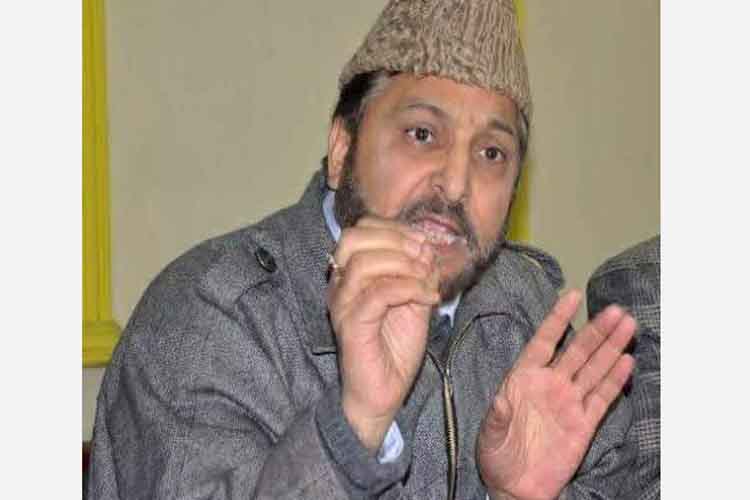 Grand Mufti of Kashmir Mufti Nasir-ul Islam
New Delhi
Kashmir's Grand Mufti Nasir-ul-Islam has expressed his pain on the targeted killings in Kashmir and said “every killing is deplorable and a heinous crime. I want people to understand that we've to maintain brotherhood between the communities. We shouldn't allow miscreants to create an atmosphere of mistrust."
Speaking to the media persons about a spate of recent targeted killings in the Valley by terrorists, he said,” Minorities can live with us in our houses.”
The call for supporting minorities was raised from several mosques across Kashmir during Friday congregational prayers.
The interaction between an unnamed Imam and the Muslims attending Friday congregation in South Kashmir in particular went viral on social media. The Kashmiri cleric condemed the killings of minority Hindus and the listeners are approving his comments with gesticulation and a loud voice:

A call for supporting minorities was raised from several Mosques across Kashmir on Friday during congregational prayers.#StandWithMinorities pic.twitter.com/uj5BUvzNoA

Grand Mufti said: while the Muslims had been demanding the return of Kashmiri Pandits, they must not leave and rather live with the majority Muslims with respect and dignity.'
He said the violence was no means to resolve any outstanding issue. “Every murder is a heinous crime and people cannot be allowed to create an atmosphere of mistrust by mischievous elements".
The Grand Mufti talked about the return of Kashmiri Pandits to the Valley. "They (Kashmiri Pandits) should not leave."
We have been lamenting about his return for the last 30 years. Now they have returned and they should live with us in peace and dignity."

The government had informed Parliament in July last year that Kashmiri Pandits were feeling "more secure" and more than 3,800 youths from the community had gone back to Kashmir to take up jobs in various districts under the Prime Minister's Rehabilitation Package.

He said that it’s the responsibility of the locals to ensure and make the Kashmiri Panditas king in the valley rests with the local residents. "This (investigation) should happen. Unless the culprits are identified and their motives known... why would they want to do this to a Bihari laborer except to create law and order situation. Their safety is our (responsibility)." He said, "We have to work together to find out who is behind such things. Questions need to be answered."

He said that the tourists have returned to the valley. "I don't see complete peace here. Yes, tourists have returned, normalcy has returned to some extent in Kashmir. But we want to see complete peace and prosperity in Kashmir. But the situation is critical."
Terrorists have klilled abank manager Vijay Kumar was shot dead by terrorists outside his office in Kulgam district of Jammu and Kashmir on Thursday. Earlier this week, Rajni Bala, a 36-year-old Hindu female teacher from Jammu's Samba district, was shot dead by terrorists at a government school in Gopalpora, Kulgam.