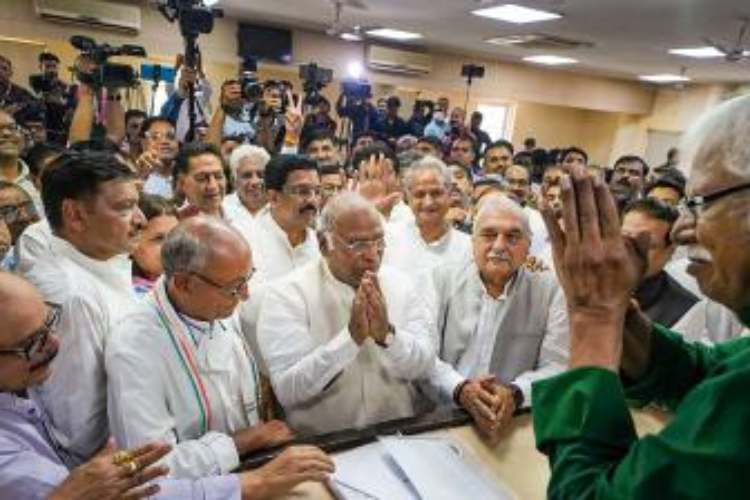 Senior Congress leader and Leader of Opposition in Rajya Sabha Mallikarjun Kharge on Friday filed his nomination for the post of Congress president at the party office in the national capital.

Ahead of filing his nomination, Tharoor had visited Raj Ghat to pay homage to Mahatma Gandhi today.

Meanwhile, Jharkhand Congress leader KN Tripathi also filed his nomination for the party's topmost position and said that "the decision of party leaders is respected".

Earlier, former Madhya Pradesh CM Digvijaya Singh and Rajasthan CM Ashok Gehlot were also a part of the race but eventually dropped out.

The former Madhya Pradesh chief minister visited Kharge at his residence on Friday morning. "I told him that I stand by him and can't even think of contesting against him, I will be his proposer," Singh told reporters after the meeting.

Congress MP Deepender S Hooda also said: "I welcome Mallikarjun Kharge's nomination for Congress president post and am confident that he will get elected. Over the years, he has raised the voice of the people in Parliament. I've signed his nomination papers as a proposer."

Meanwhile, Gehlot had on Thursday said he is pulling out of the contest after he met with Sonia Gandhi and apologised to her for the ruckus in Rajasthan triggered by his loyalists over a possible leadership change in the state.

Nominations for the post of Congress president closed at 3 pm on Friday. Results will be declared on October 19.