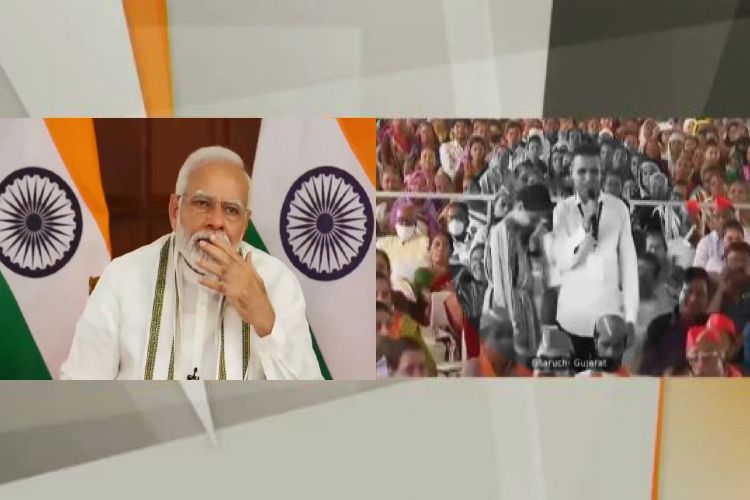 Prime Minister Narender Modi gets emotional while talking to

Prime Minister Narendra Modi spoke in a choked and became emotional; voice while speaking with a young girl Aliya at a meeting in Bharuch, Gujarat, while interacting with the public virtually in “Utkarsh Samaroh.”

The meeting saw the Prime Minister speak to some of the beneficiaries of the Utkarsh initiative, a special drive in the district to extend the coverage of special schemes for widows, destitutes and and elederly. Modi was hearing the experiences of people quietly till Alia spoke of her dream to become an ophthalmologist because of her father's blindness.

It was Aliay’s father Ayub Patel who first spoke about his condition of losing his eyesight due to glaucoma. He told the PM that his daughters are studying and he wants to fulfill their dreams.

Years ago while working in Saudi Arabia, Ayub Patel lost his eyesight due to the wrong medicine. Modi asked Ayub Patel if he was educating his daughters. He replied he was able to educate his daughters only because of the help he was receiving from the government.

Ayub Patel also said that his eldest daughter is in 12th standard and she wants to become a doctor. Modi asked him if she is around and at this Alia stood to speak.

Thereafter, in a moving gesture, Aliya placed her head on her father's shoulder and cried. Ayub Patel told Modi that she may not be able to speak due to her emotional upheaval.

At this point, Modi said in a choked voice, "Beti (Daughter), this is your passion, and this is your strength." He also asked Ayub Patel to fulfill the dream of his daughters. He asked him to get in touch with him in case he faces problems. He said, "I especially congratulate you and your daughters. You have to fulfill your daughters' dream."


The video of this conversation was also posted on Twitter:

Ayubbhai’s daughter has won the admiration of every Indian!

I wish Ayubbhai’s entire family the very best for their future endeavours. pic.twitter.com/9zHZCOKOCS

It seemed Modi wanted to speak but became emotional and maintained a meaningful silence.

According to the Prime Minister's Office (PMO), a total of 12,854 beneficiaries were identified across the four schemes.

During the drive, taluka-wise WhatsApp helpline numbers were announced to collect information about those who were not receiving benefits of the scheme.

On this occasion, the women of Bharuch also presented a big rakhi to Narendra Modi as a token of love and respect. The women thanked Modi for his support in raising the dignity of women in the country and making their lives easier.