The outgoing German Ambassador to India and Bhutan, Walter J. Lindner, has made an unforgettable impression on Indians for a variety of reasons. Beyond his distinct ponytail appearance and red Ambassador car that became synonymous with his three and a half year long posting in New Delhi, this German diplomat often dressed in Indian Kurta pyjama.

He redefined diplomacy mingling with ice-cream vendors and rickshaw pullers across India. At a special briefing at his official residence on Wednesday before flying to Bhutan, Ambassador Lindner who has served in 15 countries in a career spanning 35 years, recalled that he first dreamt of coming to India as a teenager. India was always in his head and he can never have enough of India. After all, he worked as a truck driver, taxi driver and at McDonald’s to earn enough to come to India.

Summing up his impressions of India, the super popular envoy who grew up in the Hippie times and first came to India in 1976, observed “ The India I love is deeply spiritual and multi-cultural. A big part of this country is the coexistence of the tolerance of different cultural influences and languages. This kind of multi -faceted India will always be my picture of India when I go back. India is like a huge continent. You can experience everything here. That is why if you travel even 100 hundred years, you still have not seen anything. The contradictions in the country are enormous but I would not say that this is negative. It is at at the heart of the richness of the country. In India, nothing is always as it is. You see something and the contrary is true as well. The whole world has moved on but India has also moved on. ‘’ 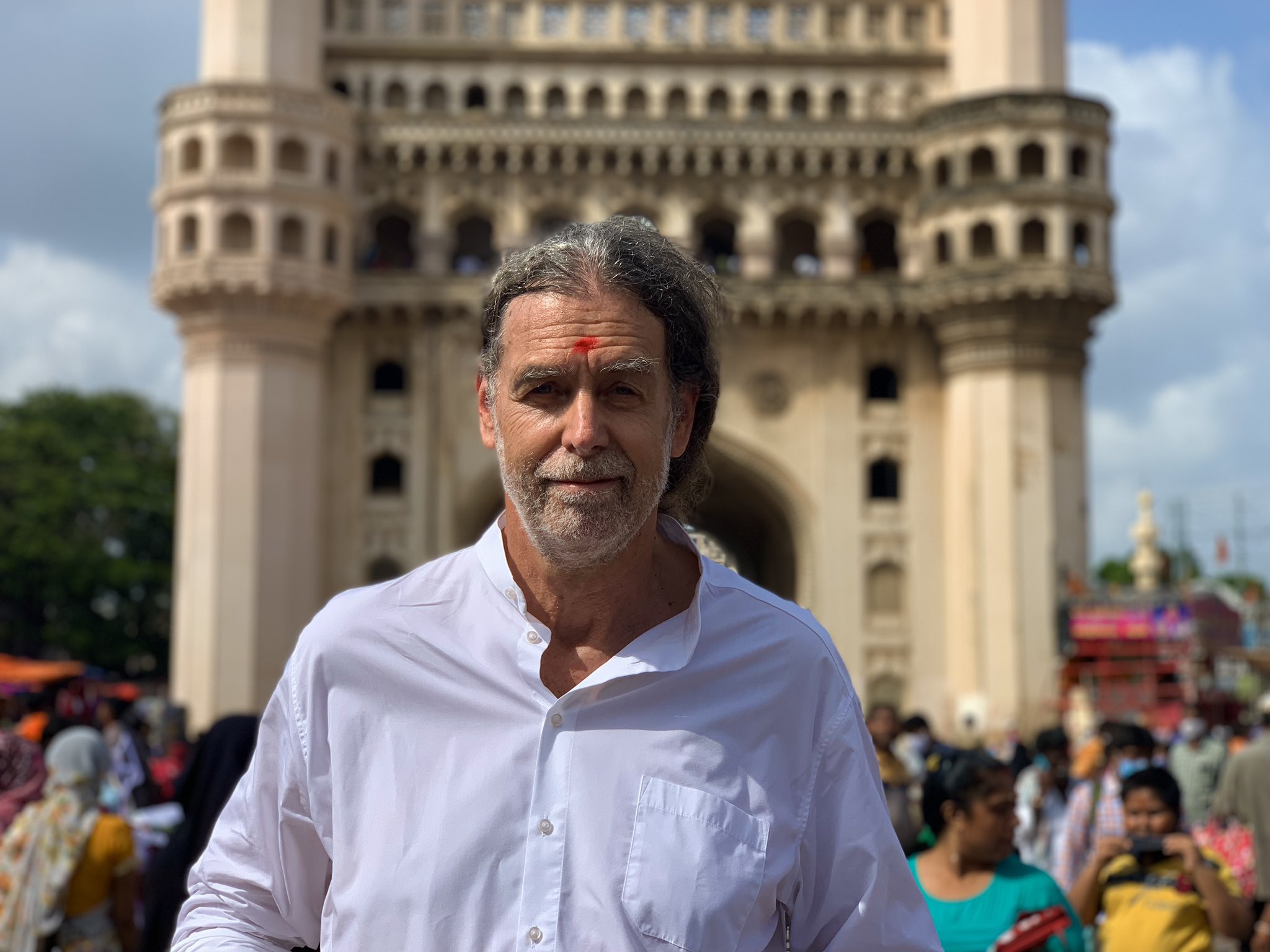 Ambassador Walter Linder in front of Charminar in Hyderbad

The two factors that triggered his desire to come to India were the 1971 Bangladesh solidarity concert, the first benefit rock concert when major musicians performed to raise humanitarian relief funds for the refugees of Bangladesh of 1971 war and ‘Siddhartha’, a book by Herman Hesse. “ Many of us read it and for us, India was a country where people were meditating under the Banyan tree. It was a counter model to the western money- making machinery. So, our dream was to come to India.So was mine.’’ 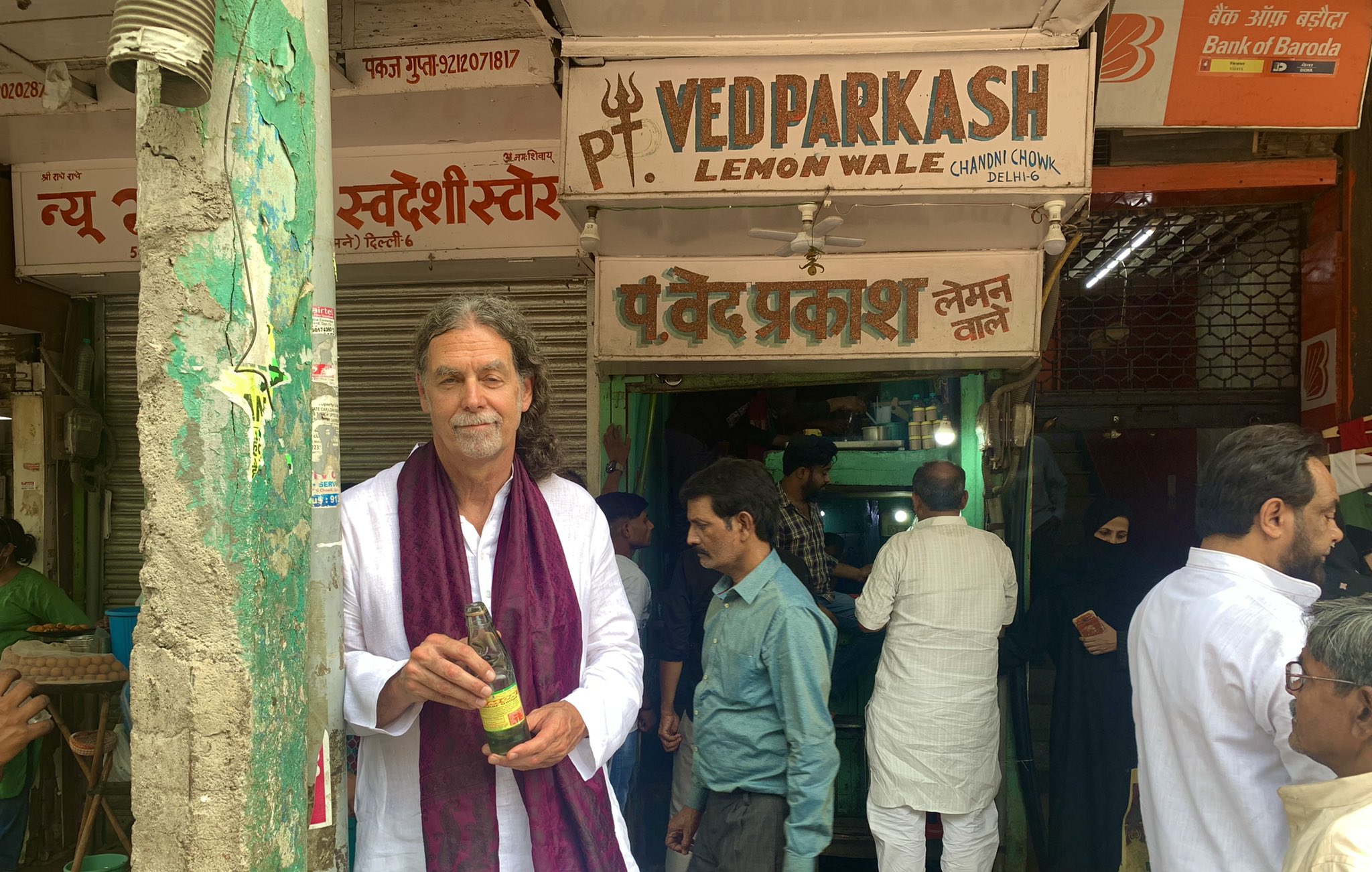 Ambassador Lindner who is also a professional musician, recalled, “ In 1971, there was of course the tragedy, a lot of refugees running away and the floods and a huge need for international aid for Bangladesh. Some people especially the Beatles, George Harrison, Bob Dylan- they said that let’s convene in the Madison Square Garden in New York a big concert. Now, this was fine as such but the funny thing and that is what I saw as a 15 year-old television watcher that there were these hippies with a lot of hair- George Harrison standing with his jeans and T shirt and they opened the door and on the other side came white dressed people. It was Ravi Shankar and his group of his famous musicians and they came on stage. And for the first time, there was a concert between the east and west. 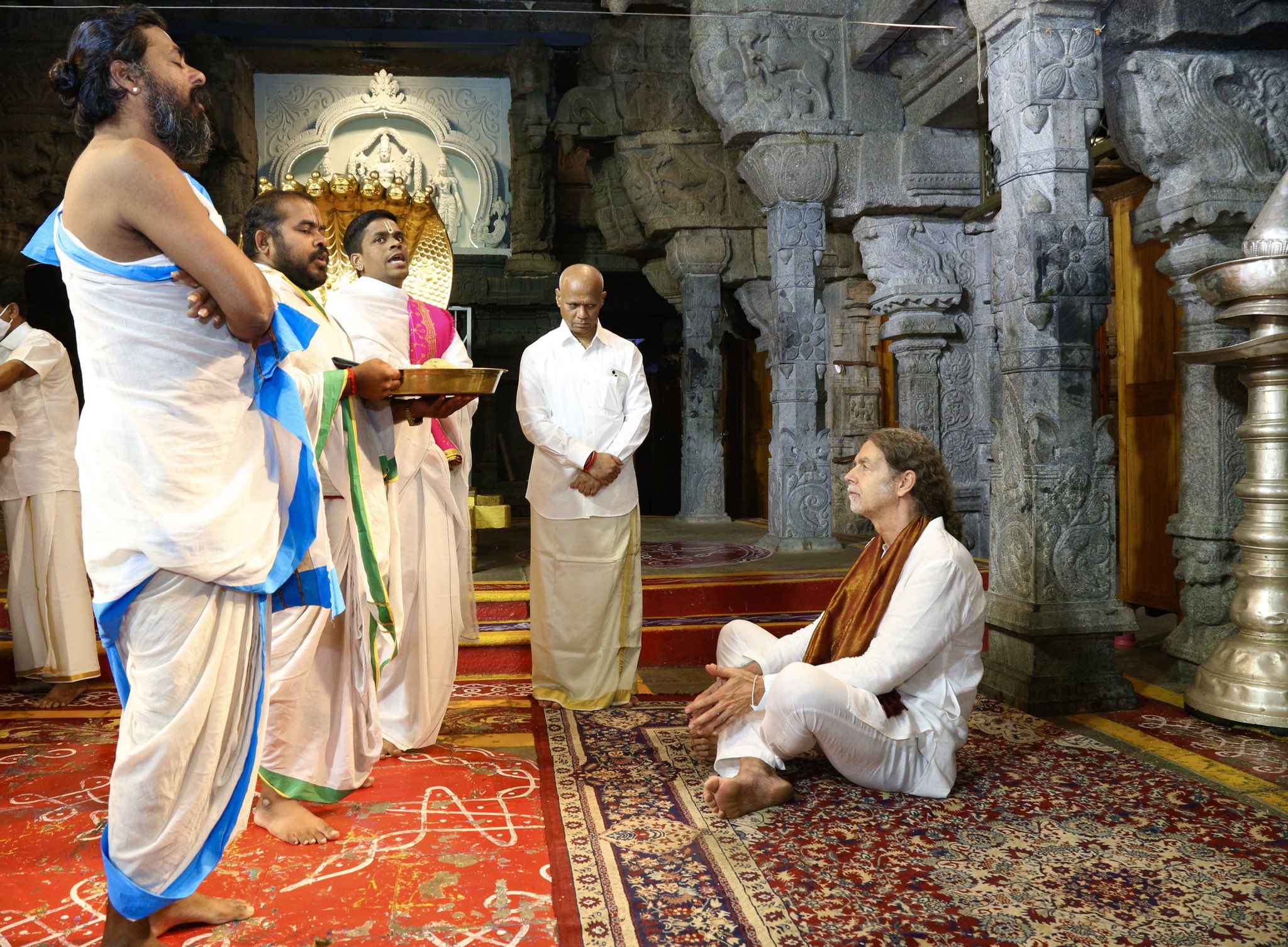 Ambassador Walter J Lindner praying in a temple in Tirupati

I saw that and I said, this is like a confirmation of all my expectations of why I want to go to India. Where these people come from, the world must be different. It is difficult to explain to you but it is something which moved me and a lot of people in my generation in Germany. From ’72 on, there was a whole march of people from the West to India.’’ Ambassador Lindner brought along an album cover of ‘Concert for Bangladesh George Harrison and Friends’ and a copy of ‘Siddhartha’ by Herman Hesse to explain the origin of his attraction for India. He first came to India as a 20 year -old with a bag pack. He recognises that it is not easy to govern such a vast country with a challenging neighbourhood.

Replying to a question, he said, “ It is easier said to run India than it is done. My previous Chancellor Angela Merkel always admired talking to your Prime Minister. How can you run such a country meaning 1.3 billion people and a huge democracy? In India, you ask five people and you get ten opinions and it is a federal State. And you have at least eight big religions in the country and this divide between poverty and the IT and every year, 20 million new born Indians which is almost the population of Australia. So, every year, another Australia is added to India. This adds to the challenges for anyone who is in government here.’’ 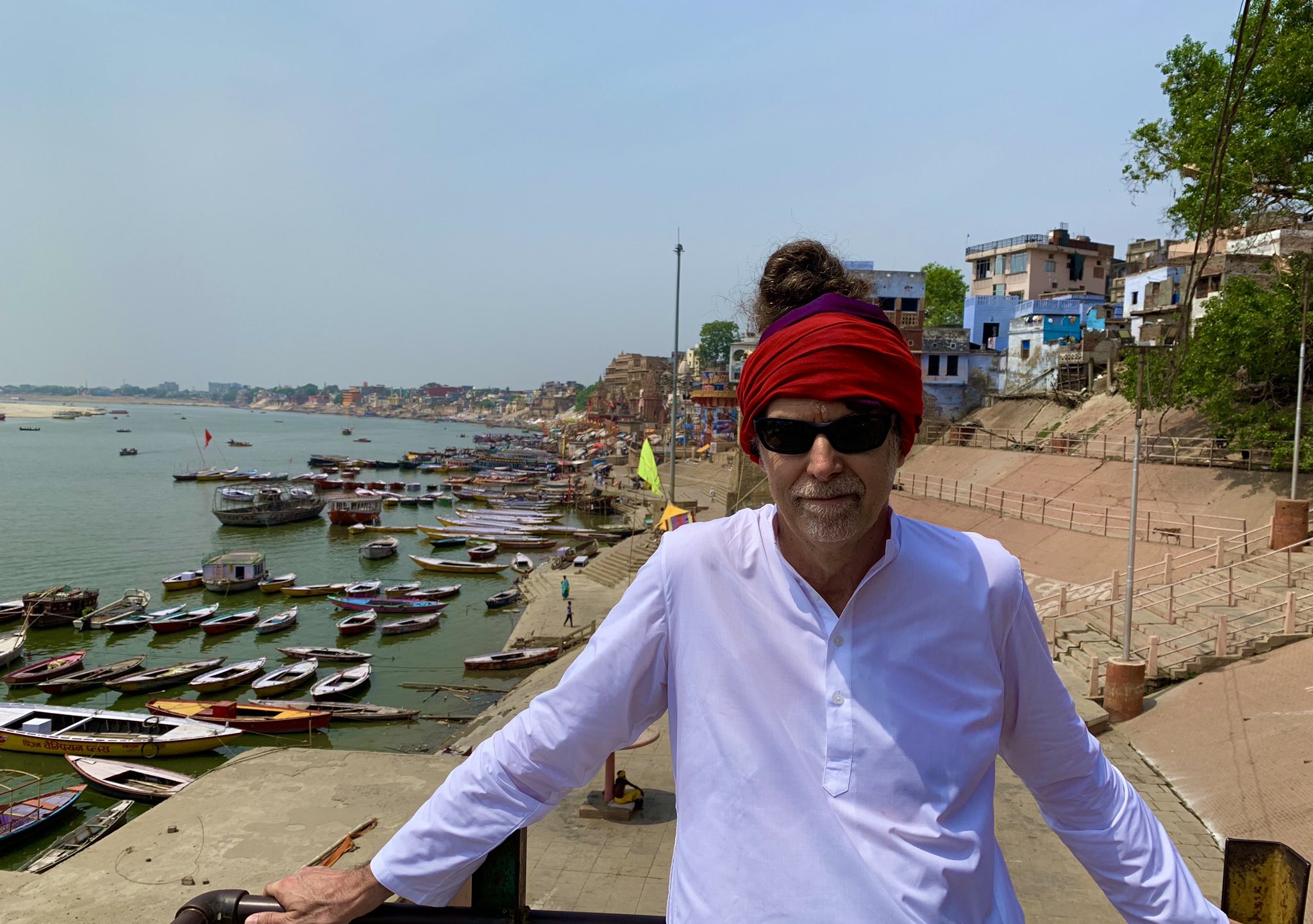 Ambassador Walter J. Lindner at a Ghat in Varanasi

The super popular envoy said, “. If you travel now, India is not for the greenhorns. I have seen most parts of India. It is so important to do that because if you just stay in Delhi, it is a very small part of India. This old -fashioned diplomacy is not good any more. It is important to be out there to talk to the people and see what is happening in the country. I want to continue travelling. My perception of diplomacy is that we have to get away from protocol, secluded acting and meeting expatriates. I have to talk to the rickshaw puller and the kulfi -wallah (a vendor selling cone shaped candies) and this gives me a broader perception of the country than just talking to think-tankers. 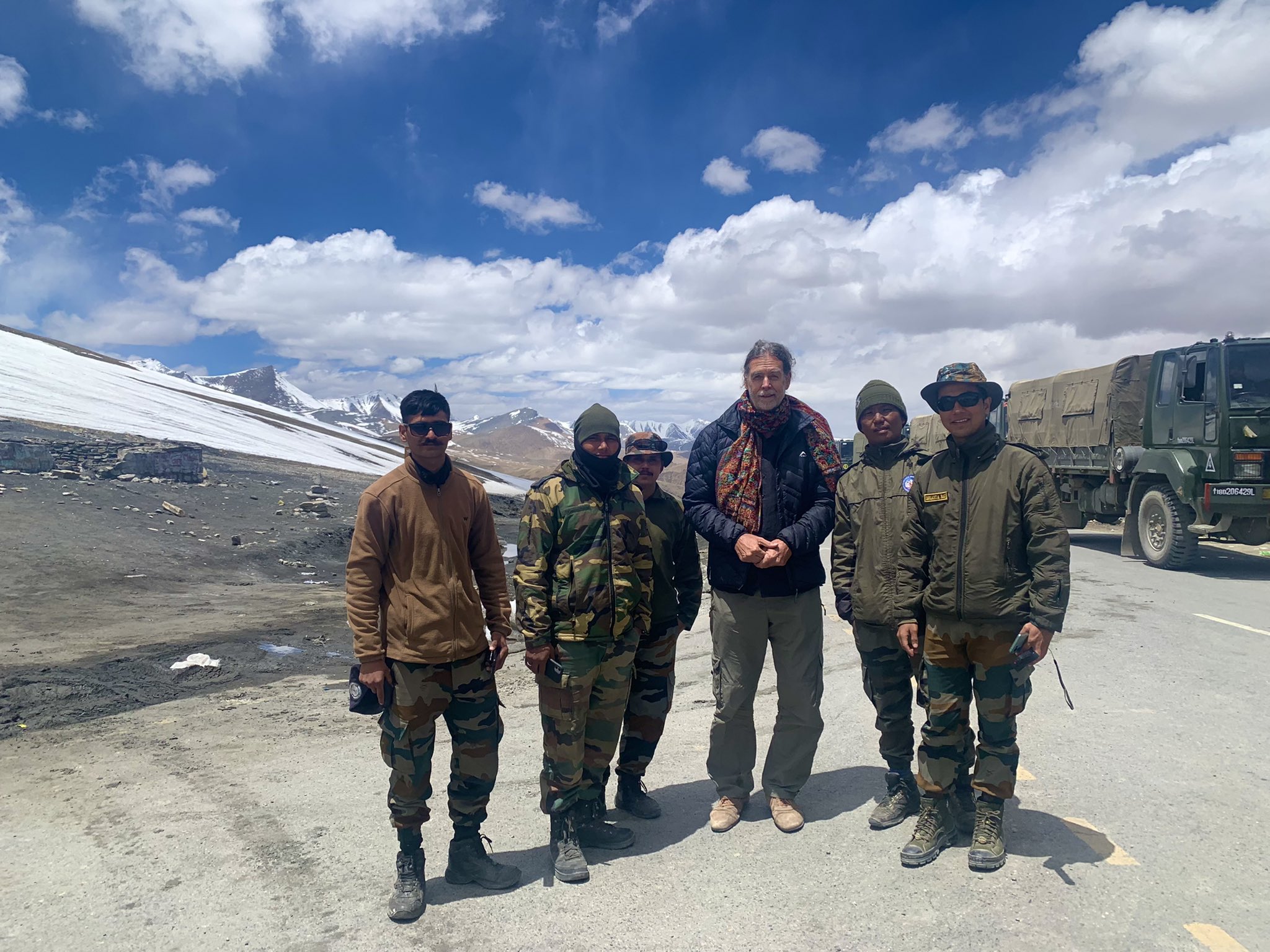 When I started my career 35 years ago, the ministry was totally different. Things have changed and we as diplomats have to change too.’’ The media friendly German diplomat who served as Staatssekretar (state secretary) in Germany from 2017 to 2019 has gained enormous popularity for his humility, unconventional diplomacy and love for photography. Asked about his ability to speak Hindi, the envoy said, “ I think, it is important to show people that you are interested in their culture. I wish, I could speak at least ten languages spoken in the country