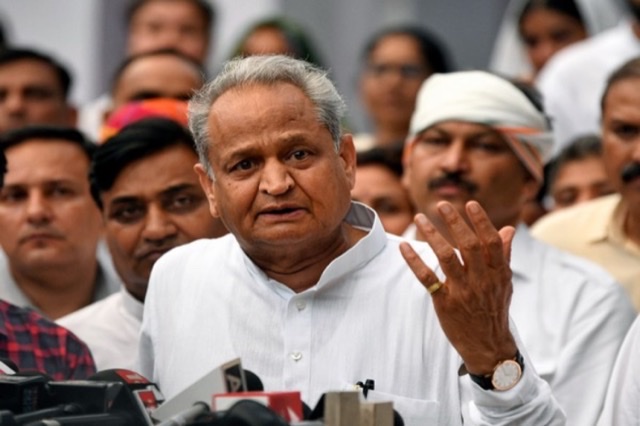 As violent protests against the Centre's new short-term recruitment policy for armed forces continue in parts of the country, the Rajasthan Cabinet has passed a resolution demanding the withdrawal of the Centre's Agnipath scheme keeping in mind the "larger public interest and the sentiments of the youths".

A meeting of the State Council of Ministers was held under the chairmanship of Chief Minister Ashok Gehlot at the Chief Minister's residence here on Saturday where concerns were expressed over the nationwide protests against the Agnipath scheme of the Central Government. "In the meeting of the State Council of Ministers, it was discussed that the Indian Army is the bravest in the world and is known for its indomitable courage. Whole country takes pride in the Indian Army's glorious history. To maintain dignity and prestige of the Indian Army, it is necessary to have skill, experience and stability in the forces. To increase efficiency in the Army, it is crucial to have permanent soldiers instead of short-term recruits, so that the country can reap the benefit of their experience. The Army must be equipped with all the resources and must be continuously strengthened," read a statement by the Rajasthan government.

Noting the massive protests across the country regarding the provisions in the scheme, the State Government said it is of the view that the Central Government should have had a comprehensive discussion with all the stakeholders before introducing any such scheme. "It was discussed in the meeting that, many military experts are of the opinion that the Agnipath scheme will neither secure the future of the youths nor will the country's Army face the challenges with full confidence Experts say that there should be regular recruitment in the country's Army, along with better training soldiers must get all the benefits so that their future and their family's future can be secured," the statement added.

AGNIPATH scheme allows patriotic and motivated youth to serve in the Armed Forces for a period of four years. Soldiers who are recruited under this scheme will be known as Agniveers. A total of 46,000 Agniveers will be recruited this year. Following protests, the Central government announced an increase in the upper age limit for the recruitment of Agniveers from 21 years to 23 years for the recruitment cycle of 2022.

While Defence Minister Rajnath Singh said that the 'Agnipath' scheme gives a golden opportunity to the youth to join the defence system and serve the country, senior Congress leader P Chidambaram said the recruitment policy is controversial, carries multiple risks, subverts the long-standing traditions and ethos of the armed forces and there is no guarantee that the soldiers recruited under the scheme will be better trained and motivated to defend the country. Congress has urged the government to keep the Agnipath scheme in abeyance, hold wide consultations with serving and retired officers, and address the issues of quality, efficiency and economy without compromising on any of the three considerations.

Defence Minister Rajnath Singh on Saturday approved a proposal to reserve 10 per cent of the job vacancies in the Ministry of Defence for 'Agniveers' meeting requisite eligibility criteria. Earlier, Union Home Minister Amit Shah announced that his ministry has decided to give priority to 'Agniveers' in the recruitment of the Central Armed Police Forces (CAPFs) and Assam Rifles.