"Languages ​​are the bonds between civilizations; Urdu and Sanskrit can be instrumental in bringing the two great quom (nations) of India closer.” These are the thoughts of Hafiz Jalaluddin Al-Qasimi of Malegaon, Maharashtra, who has obtained the degree of 'Fazil' from Darul Uloom Deoband and is also a Sanskrit scholar.

An author Jalaluddin-Al Qasmi is these days actively promoting Sanskrit, the most ancient language of the world that is not in use today. He not only learned Sanskrit in five years but also mastered the language. He’s the author of Sanskrit-Urdu Grammar.

Interestingly, Malegaon is seen as one of the major centers of Urdu in the country. Maulana Jalal al-Qasimi's initiative from this place has thus set an example. Hafiz Jalaluddin al-Qasimi, who hails from Nogoan village in Basti, Uttar Pradesh, has been living in Malegaon for many years. In his school The Knowledge he teaches Sanskrit in nursery class. This school has thus become the first one in the country where Sanskrit is being taught in nursery class. 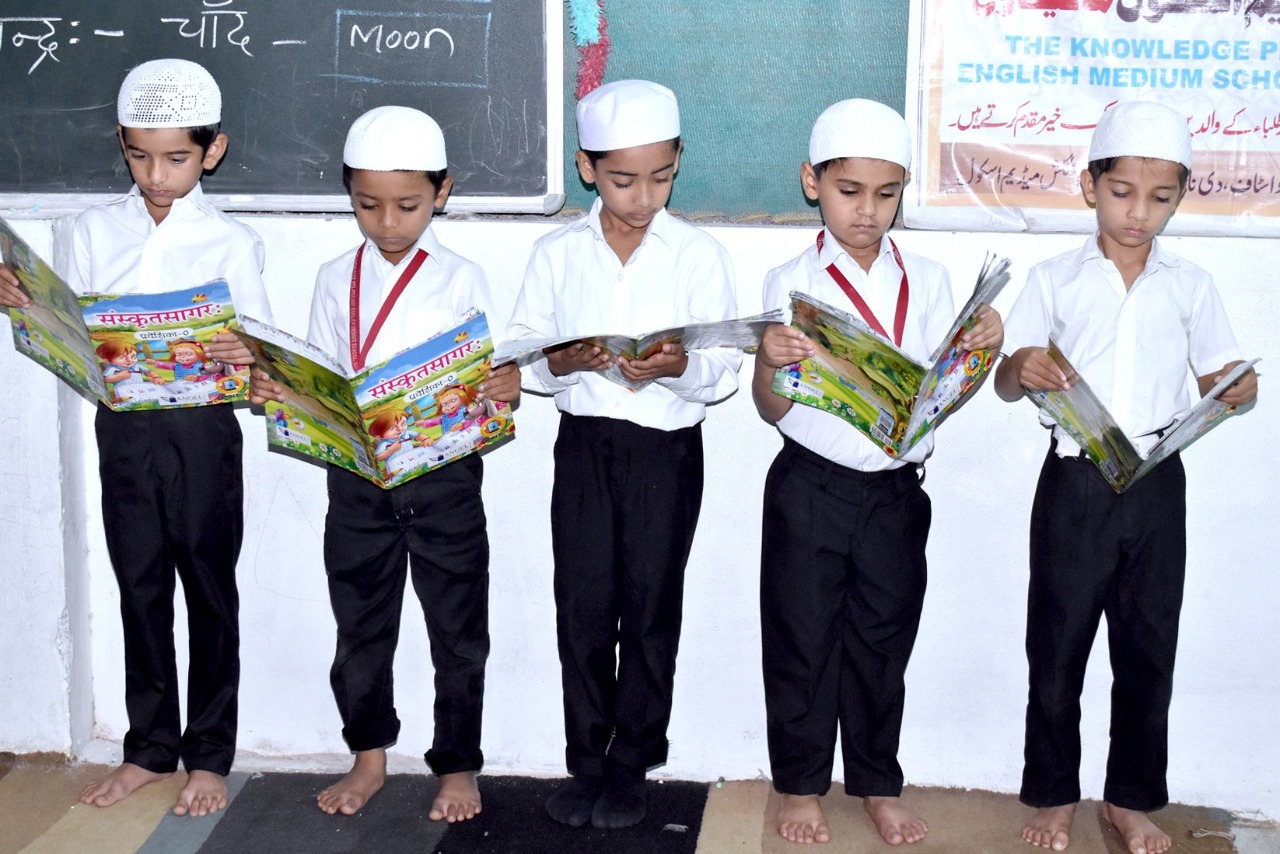 At the same time, it is the oldest language in the world. It is said to be the mother of all Aryan languages. All the ancient literature of India is in this language. Books on Upanishads, Ramayana, Mahabharata, Pajan, Poetry and Drama, Medicine, Astronomy, Politics, Wealth and Bhagwad Gita, Philosophy, Wisdom, and Mathematics are also in Sanskrit.

He says that in Sanskrit it's very important to keep one's words in abbreviation, therefore it’s considered very useful for computer science. It is worth noting that the character of Sanskrit is What is the interest in the language?

Maulana Jalaluddin Al-Qasimi says, “there was a time when I used to listen to the speeches of eminent people to understand Hindu religion; It did not give me satisfaction. So, I thought why shouldn’t I learn the language and understand it all. I started learning Sanskrit five years ago. The biggest advantage of Sanskrit is that once you know it, you can read and understand the Hindu religion. It is better to study by yourself than to hear from others."

Hafiz Jalaluddin Al-Qasimi says his decision to learn Sanskrit five years ago was not a coincidence. “It wasn't just a coincidence, but I wanted to learn Sanskrit to understand Hinduism because most of the religious books are in Sanskrit. I studied Hinduism and found the concept of Ishwar very clear. That is, God or Ishwar is one. I think (Bhagwad) Gita is a very good book, it should be read by everyone.” 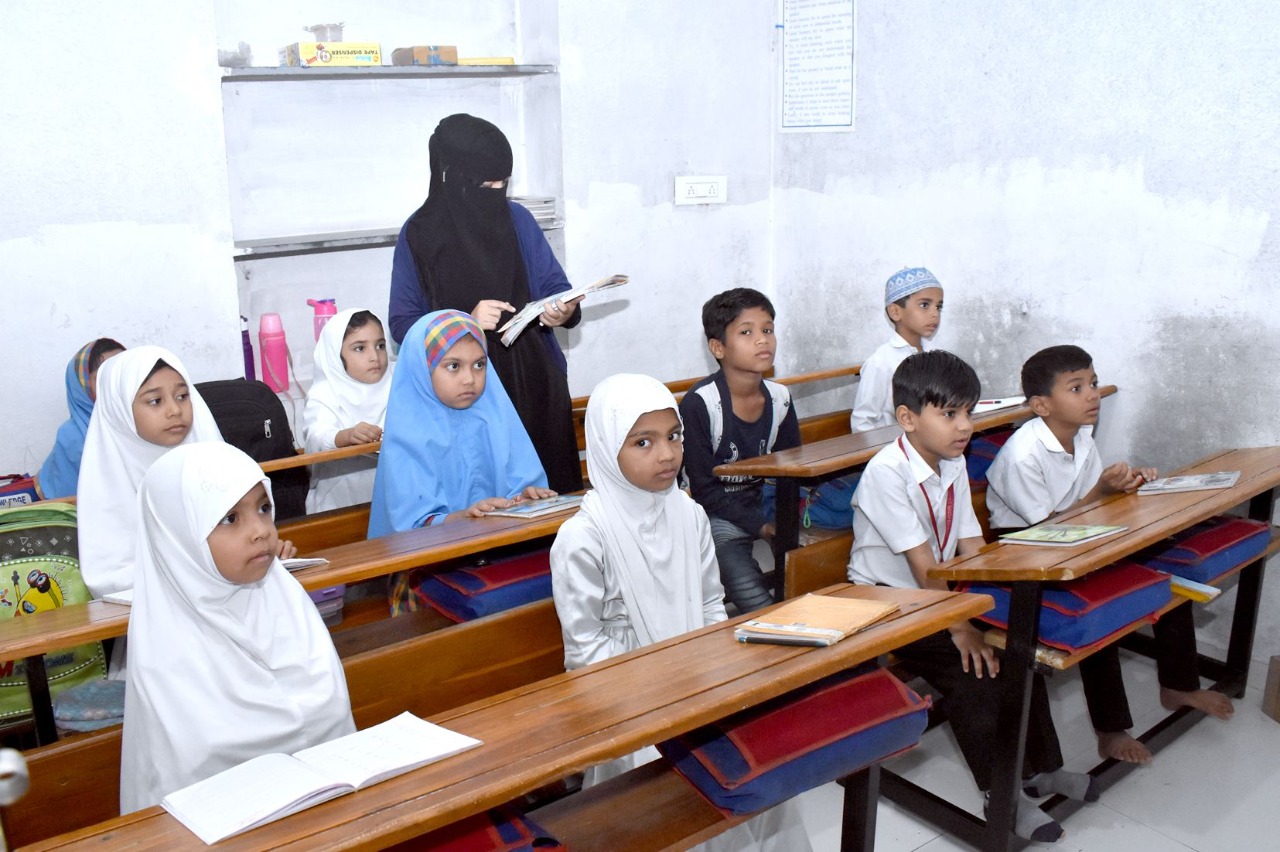 Students in a class in The Knowledge school

He says that it is better to read about religion than hear about it through others. This not only removes mutual misunderstandings but also makes it clear that whatever the religion, it conveys the message of peace and brotherhood.

Maulana Jalaluddin Al-Qasimi said that the experiment of introducing Sanskrit in primary school was very successful, and it will benefit everyone in the long run. He told Awaz-the Voice that he wanted to make this school an example. In the future, we will try to fulfill the dream of transforming it into a high school and a college.

He recited Mahishwar Sutra and Dua in Sanskrit with Hindi translation and it impresses everyone.

His book was launched by Sanskrit scholar Pandit Kishore Prashuram Lamia. On this occasion, eminent intellectuals and linguists of Maharashtra who were present appreciated his passion and hard work.

Kishore Prashuram Lamia said that an amazing and important work has come to light.’ After five years of hard work on a difficult language like Sanskrit, Hafiz Jalaluddin Qasmi has mastered the language and set an example for all of us.”

He said his work will touch every Indian. Lata Dhonde, DySP, Malegaon, said that Allah has chosen His chosen servants for such good deeds and the book will greatly benefit everyone.

The first edition of the book is finished and now the second edition is coming which is also available on Amazon.

Maulana Jalaluddin Al-Qasimi told Awaz-the Voice that language can be a ladder of friendship, remove misunderstandings, and can create closeness. So, we should embrace languages.”

How did the idea of ​​writing a grammar book after learning Sanskrit come into his mind? To this question, he said, "I want Muslims to benefit from this. As soon as I learned the third language, the idea of ​​making it easier for other people came to my mind. According to my information, there was no book in Sanskrit Urdu grammar in the world. Due to my interest in this language, I had a dream that a book on Sanskrit Urdu grammar would pave the way for reading Sanskrit grammar written in other languages ​​in detail. My book Sanskrit Urdu Grammar is the interpretation of this dream.