Rohit Kumar and his mother Tarawati outside their house (Pics: Tripti Nath)

Rohit Kumar, a 32- year- old washerman in the dhobi ghat behind V.P. House here, is elated that the national flag is fluttering right at his doorstep but is equally determined to preserve the tri-colour after the Independence Day.

A class X dropout, Rohit and his parents have been washing clothes of many politicians in Lutyen’s Delhi including Union Home Minister Amit Shah. Rohit said that the NDMC staff came and distributed national flags to them a few days back,

While Rohit’s mother Tarawati said that she will not remove the national flag even after Independence Day, Rohit said that he will make sure he washes the flag cloth. “I will wash the flag cloth, iron it, fold it and preserve it in a trunk at home. Even if the NDMC people had not distributed flags, we would have still bought them.’’

Rohit who hails from Sultanpur in Uttar Pradesh is an example of how the sense of nationalism is a universal phenomenon and the pride in national icons like the Tricolor transcends the class. 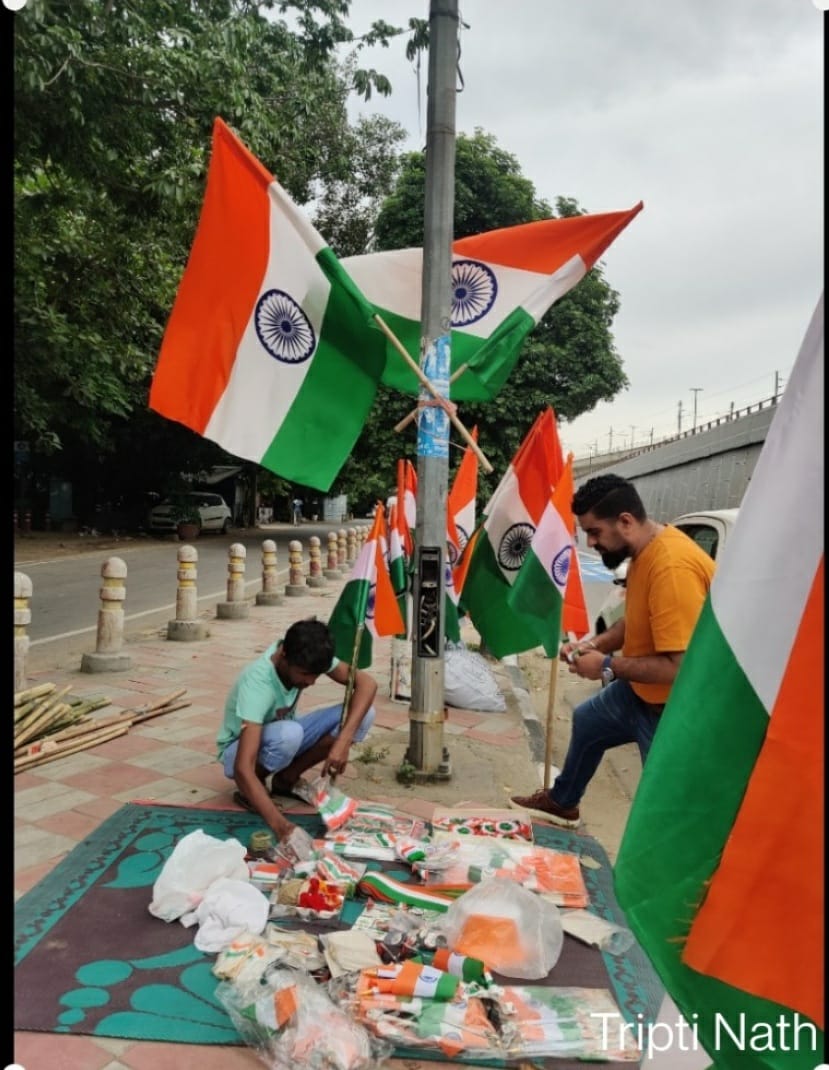 Like Rohit, his neighbour Panna Lal who hails from Malihabad near Lucknow in U.P. takes pride in the national flag and being an Indian. Panna Lal, 50, is illiterate and comes from a family of washermen. He has many politicians as his clients including the family of the deceased Bihar leader Ram Vilas Paswan. He says, "I worked in Dubai for three years but came back. We are a great nation."

The Indian flag is indeed flying high and has become almost omnipresent in the run up to the 75th Independence Day on August 15. The ‘Har Ghar Tiranga’ appeal by the Prime Minister Narendra Modi to all citizens to hoist the national flags in every home in the run up to India’s Independence Day, has evoked an overwhelming response. On Wednesday, the Ministry of Communications said that the Department of Posts has sold more than one crore flags in ten days through its 1.5 lakh post offices across the country. It is heartening to see the larger- than- life national flags at many places in Delhi. Delhi’s skyline is looking bright and beautiful with the flags and lifting the spirits of people.

Not just this, many residents in South Delhi have pitched the tri-colour right at their gates. Everybody wants to give the flag its place of honour, be it the poorest of the poor slum dweller, an ice cream vendor or an auto rickshaw driver.

People are buying the tri-colour with the same fervour as they buy ‘Diyas’ (clay lamps) on Diwali or 'Gulal' (Holi colour) on Holi. Road users in Delhi are halting by the wayside to pick up the Indian national flag available in different sizes. 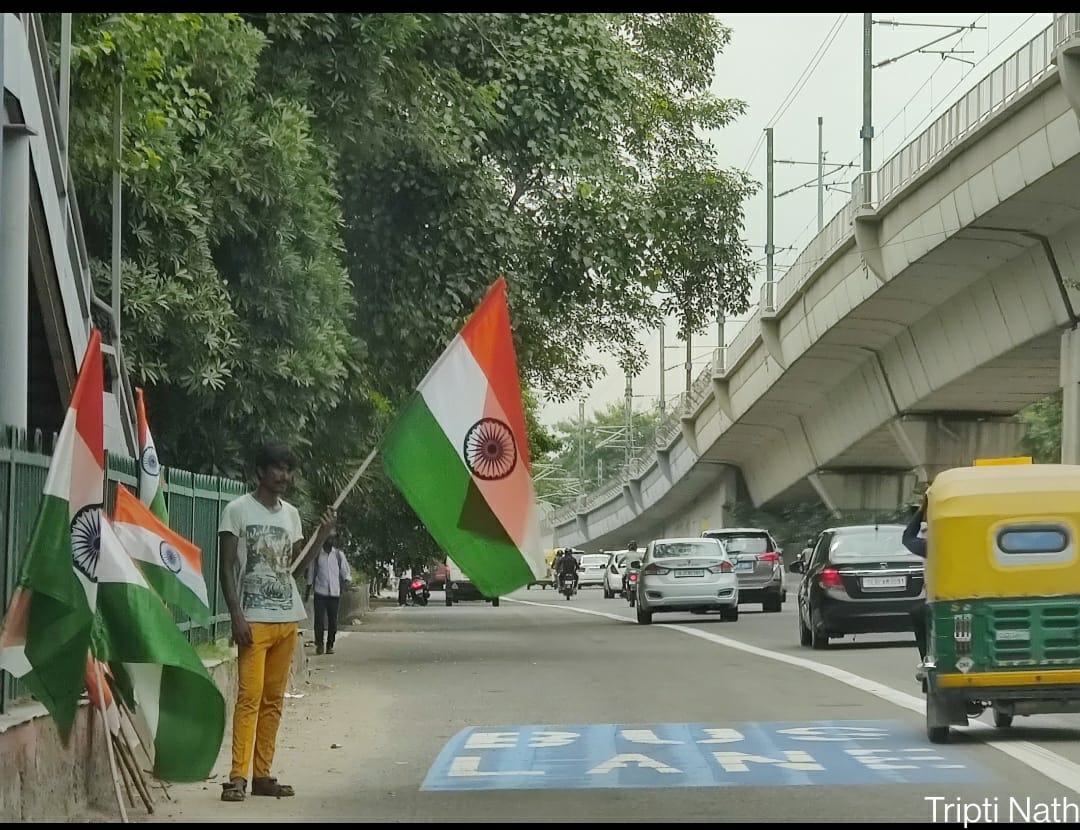 Danna Lal, a middle-aged farmer from Agucha village in Bhilwara, Rajasthan, has been living under the South Bagh flyover for many years. Like an early bird that catches the worm, Danna Lal turns up at the chosen spot on a sidewalk on the ring road, before 9 a.m. It is impossible to miss him as he waves the national flag to catch the attention of road users.

His relative Shankar, a Class VI dropout from Chainpura attends to customers who halt to look at what they are selling. The products range from national flags to tri-colour broaches and badges, paper eye shades and tri-colour wrist bands. Danna Lal and Shankar are doing brisk business. As customers haggle with them, Danna Lal and Shankar tell them that they have brought the material all the way from Sadar Bazar in Old Delhi. A paint bucket is being put to good use to stack the flags upright.

Krishan Prasad had just stopped his Skoda, official car of a retired judge that he drives, to buy a flag. He said he was buying the flag for his employer ex-judge Deepak Gupta.Kamal, 33, driver in the Finance Ministry carried the flag carefully on his maroon scooter. Kamal who lives in Kotla said that he is bound to follow the Har Ghar Tiranga appeal of the Prime Minister.

Nikhil Wadhwa from Dwarka bought two flags from Danna Lal. Wadhwa, a businessman said that he was buying a badge for his son Vihaan’s attire for a preschool fancy dress event where he is dressing as India’s first Prime Minister Jawaharlal Nehru. 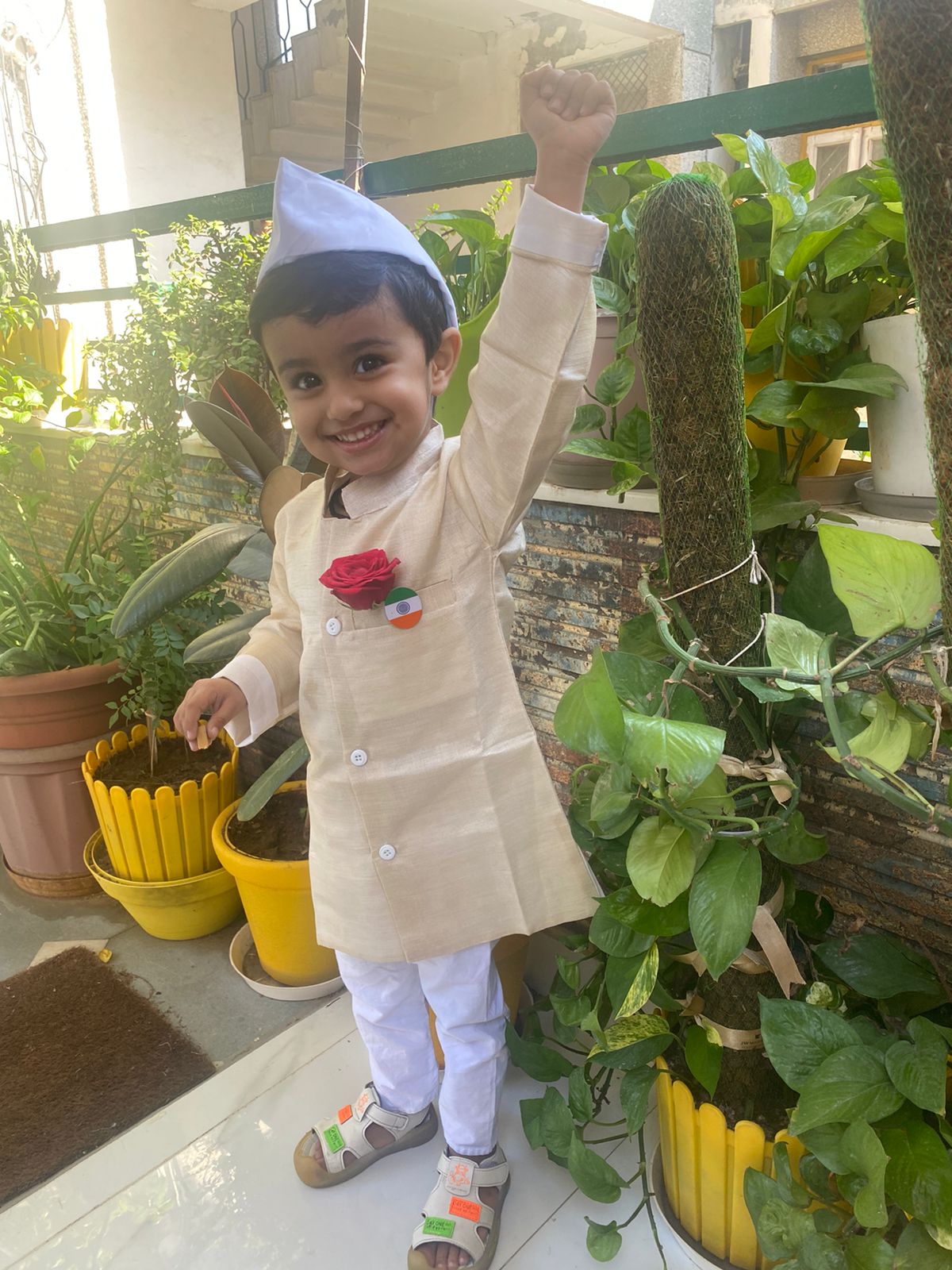 Although the privilege of hoisting the National Flag on motor cars is only limited to select persons such as the President, the Vice-President, Governors and Lieuteant Governors, Heads of Indian Missions/Ports, Prime Minister and some others as per paragraph 3.44 of the Flag Code of India, 2002, it is not uncommon to see the flag being used in vehicles of the common man, Army vehicles and auto-rickshaws.

Whatever be the reasons for buying the tri-colour, the Har Ghar Tiranga under the aegis of Azadi ka Amrit Mahotsav to mark the 75th year of India’s independence has injected patriotic fervour like never before.

A brainchild of Prime Minister Narendra Modi, the ‘Har Ghar Tiranga’ campaign from August 13 to 15, is aimed at encouraging people to bring the Tiranga home and to hoist it to mark the 75th year of India’s independence. Earlier this month, Union Home Minister Amit Shah said the "Har Ghar Tiranga" programme is a message to the world that every citizen of India is united to take forward India’s journey of development, prosperity, security and culture.

The Ministry of Culture said, "Our relationship with the flag has always been more formal and institutional than personal. Bringing the flag home collectively as a nation in the 75th year of independence thus becomes symbolic of not only an act of personal connection to the Tiranga but also an embodiment of our commitment to nation-building. The idea behind the initiative is to invoke the feeling of patriotism in the hearts of the people and to promote awareness about the Indian National Flag.’’

The Prime Minister has also appealed the countrymen to hoist the national flag in their homes and to change the display pictures of their social media accounts - Facebook, Twitter, and Instagram - to the Tiranga or tricolour.