For God's Sake Be Human! 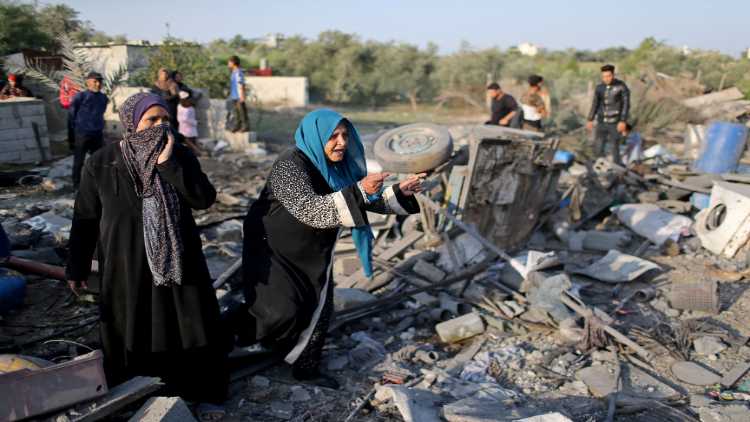 Images from Gaza: women looking through the rubble of houses destroyed

Today the world is passing through a stage of degeneration. No doubt, the prevailing Covid-19 pandemic is also the result of people's inhuman acts and bad doings. The holy Qur'an says:"Mischief has appeared on land and sea because of the deed that the hands of men have earned, that Allah may give them a taste of some of their deeds in order that they may turn back from evil."(S.30,A.41)

The moral fabric of the society has been torn to shreds. Materialism has overshadowed the finer aspects of life. Corruption of all kinds has now become a way of life. In this context we may recall T.S.Eliot, one of the greatest poets of the twentieth century, who composed  a famous poem named The Waste Land  after observing the then prevailing moral degeneration, abjection,abasement and beast like behavior in Europe.He described Europe as a waste land on account of the sins committed by its people. He further threw light on the disillusionment of a whole generation pointing out  spiritual degeneration and prevalence of lust in contemporary Europe.

The recent Israeli airstrikes that claimed lives of more than 230 Palestinians show candidly their inhuman and barbaric attitude against humanity. It also makes us realize that humanity has reached its lowest ebb; the sanctity it carries has vanished.

Reportedly,  more than 230 Palestinians including 61 children  and 36 women, were killed.

Nearly 450 buildings, 50 schools, six hospitals and nine primary health centers in the Gaza strip have been destroyed. More than 52,000 Palestinians had been displaced, the UN aid agency  said.

It is time all Muslim countries and UNO must come forward and take serious steps to extinguish the fire of unending Israeli airstrikes, atrocities and oppressions in Palestine..Besides, we all pray to God for peace in Palestine. In  the words of Pandit Jawaharlal Nehru, "Even so, there is something else which we consider is of greater importance; that is peace. Without peace our dreams vanish and are reduced to ashes "(India's Foreign Policy,p,218)

After all, as human beings, it is imperative for us to feel the pain and suffering of all human beings regardless of caste, creed, religion, and region. Here noted Islamic scholar Syed Abul Hasan Ali Nadwi's thought-provoking words are worth quoting. He says, "If man loses the ability of sharing other's suffering, he will become bankrupt. Even if a nation is blessed with the wealth of America, administration of Russia and petrol wells of Saudi Arabia, even if rivers of gold and silver flow in it and even if wealth showers over its land like rain it will still be truly pauper if its stream of love is dried.

To sum up the argument  it will be apt to quote the prophet Muhammad (PBUH) "God shows His mercy on those who show mercy to others."Maulana Hali has beautifully and aptly composed the above Tradition of the prophet in this couplet.

All said and done solution of all problems lies in revering human beings.)