Prime Minister Narendra Modi’s 3-nation European tour from May 2 to 4 that included a meeting with German Chancellor Olaf Scholz, attending the India-Nordic summit, and a meeting with President Emmanuel Macron in France signifies India’s increasing geopolitical and geoeconomic engagement with Europe.

The EU is India’s third-largest trading partner after the US and China, with total trade in goods and services valued at over $100 billion in 2020. Over the period April 2000 to March 2020, FDI inflows from the EU to India were valued at $109.55 billion. India-EU negotiations on an FTA have now re-started.

Germany, India’s biggest economic partner within the EU, is undergoing a political transition after 16 years of Angela Merkel’s rule. It was opportune for Modi, therefore, to visit the country at the earliest and set the bilateral agenda for the future.

Germany is an economic heavyweight, not politically. The manner in which it has buckled under US pressure to support Ukraine militarily against Russia, boost its defence spending, potentially buy F-35 fighter aircraft, and shut down the Nord Stream 2 gas pipeline from Russia has implications for Europe’s economic and security policies in the future and Germany’s role in it. A prolonged conflict in Ukraine and continuing hostility with Russia point to much uncertainty ahead.

Differences between India and Germany on Ukraine got highlighted with Chancellor Scholz telling the Indian press before Modi’s visit that he was confident about a broad agreement with India on Russian actions that violate the core principles of the UN Charter and on the principle that massacres against the civilian population are war crimes and those responsible must be held accountable. This was overplaying his diplomatic hand, knowing India’s repeatedly expressed position on the Ukraine conflict in the UN and outside. Assuming that India could be made to change its position was a mistake as Europe’s stand on Russia is rooted in the Cold War with repeated extensions of NATO despite Russian warnings and now arming Ukraine, imposing draconian sanctions on Russia with international consequences and the declared aim of permanently weakening Russia and promoting a regime change there cannot be shared by India.

Modi’s visit took place under the shadow of Russia’s invasion of Ukraine which is pre-occupying Europe. It could not have been postponed as this conflict is going to be prolonged. It is just well it has taken place now so that Europe knows the limits of the pressure it can put on India. In the event, the Ukraine conflict figured prominently in Modi’s meetings in Europe. The EU seems to have decided on the language that it would use on Ukraine in the joint statements with India, and this identical language of strongly condemning Russia was repeated in the joint statements with Germany, Denmark, the Nordic summit countries and France, knowing that India would not subscribe to this and differences on the subject could be made open in the joint statements, something normally avoided. But a separate paragraph on Ukraine was also included in all these joint statements that conform with India’s stated positions as they have evolved. 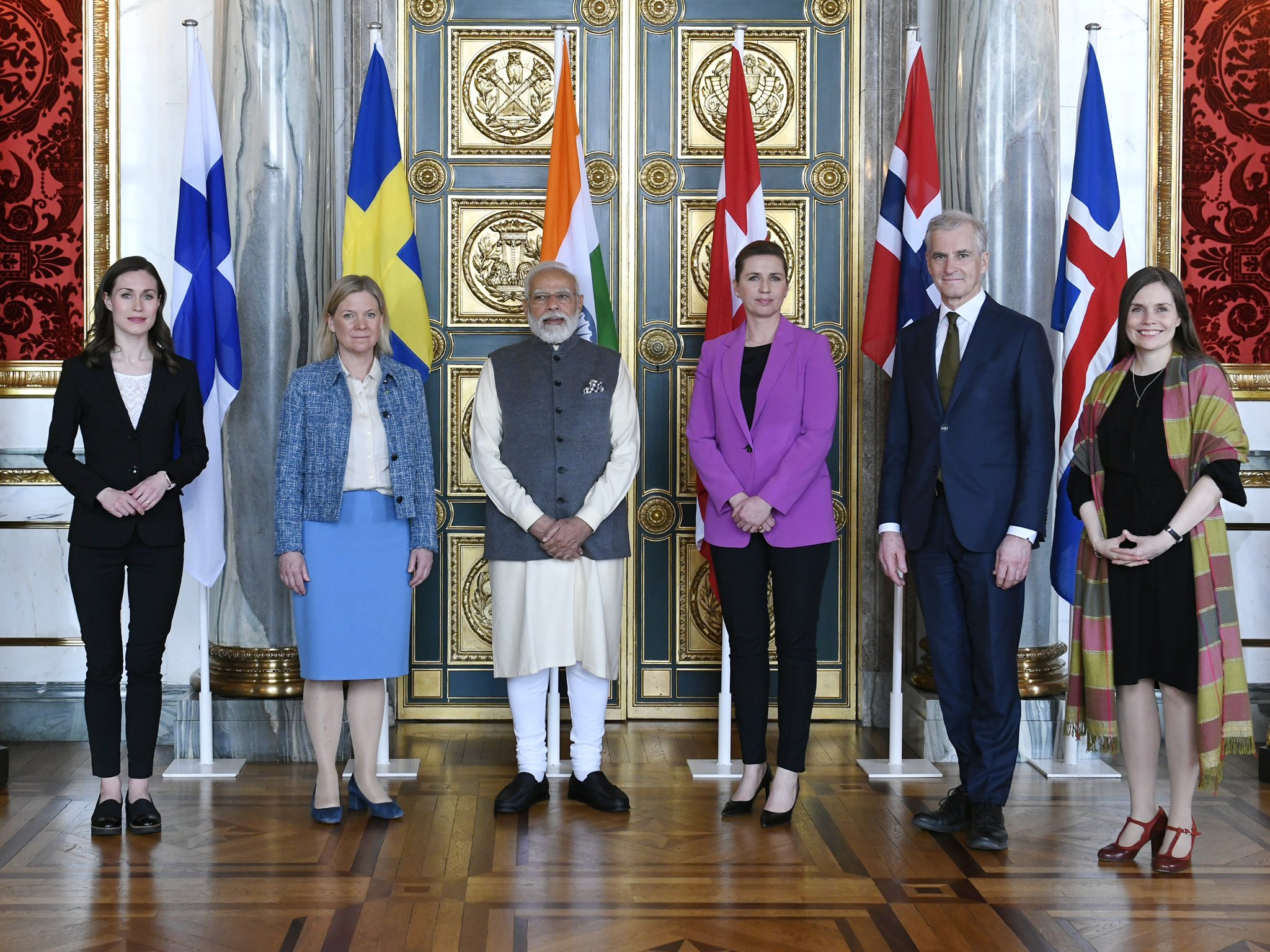 India and France, however, took a larger view of global consequences by noting with deep concern the current aggravation of global food security and nutrition because of the Ukraine crisis, already impacted by the Covid-19 pandemic, especially in developing countries. The two sides will back a coordinated, multilateral response to address thisrisk, including through initiatives such as the Food and Agriculture Resilience Mission (FARM), the role of India in the latter being highlighted by Macron. It was important for Modi to get Macron’s perspectives on the conflict in Ukraine given Washington's determination to prolong it as much as possible in the declared hope of ousting Putin which would leave Europe worse off.

Europe is heavily focused on Climate Change, renewable energy, green hydrogen, and energy transition issues and cooperation on these figured prominently in the joint statements with Germany, Denmark and the Nordic states collectively, as well as with France.

In Germany, the focus was on just energy transition pathways, an Indo-German Partnership for Green and Sustainable Development for which Germany will make available additional commitments of Euros 10 billion till 2030 (appreciated specifically by Modi), an Indo-German Green Hydrogen Road Map as well as triangular cooperation in third countries to help achieve SDG and Climate Change goals. The two sides have agreed to create a biennial Ministerial Mechanism to provide high-level political direction to the Partnership.

With Denmark, the shared areas of cooperation identified were climate action, green growth and energy diversification, with the focus on green hydrogen, an Energy dialogue at the Ministerial level, planned Danish support for the work of the International Solar Alliance and urban and rural water supply, besides health and shipping. An agreement on setting up Centres of Excellence on Green Shipping and Dairy was also announced during the visit.

With the leaders of the five Nordic countries, Norway, Sweden, Iceland and Finland at the Nordic summit hosted by Denmark, the broad subjects of cooperation identified were also green transition and climate change in addition to the blue economy, innovation and digitization. 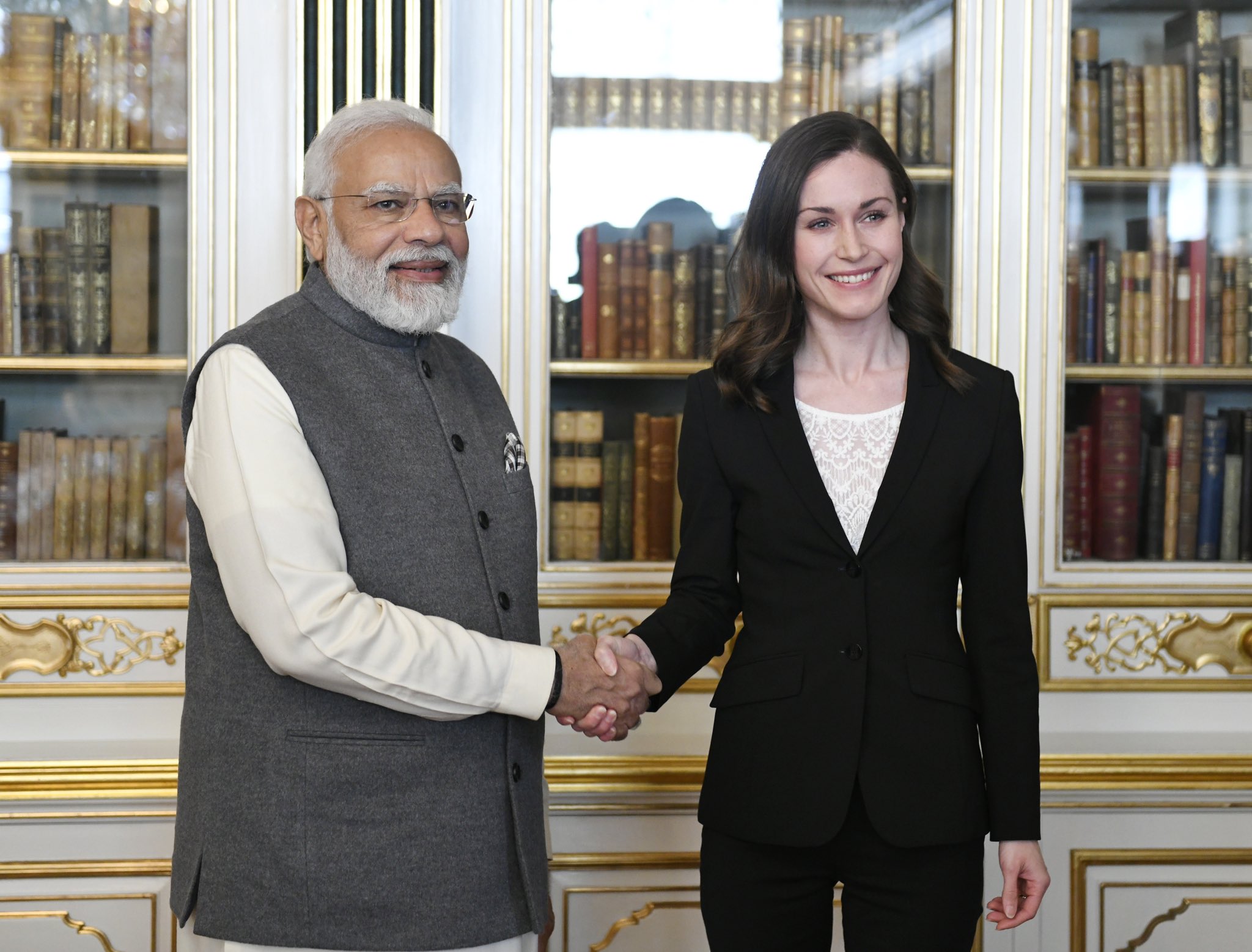 The blue economy also figured in the joint statement with France. India has invited France to participate in its initiative to make India a Green Hydrogen Hub under its National Hydrogen Mission. India and France have also agreed to explore opportunities to jointly work on just energy transition pathways including under G7 to accelerate the deployment of renewables and access to affordable and sustainable energy.

Modi’s bilateral visit to Denmark and the summit with Nordic countries hosted by the Danish Prime Minister is a continuing effort by India to reach out to the smaller European powers, beyond Germany and France, in a bid to broaden understandings with individual EU countries which will facilitate its relationship with the EU at Brussels, now that the grouping is set to expand its role on strategic geopolitical issues. Besides this, these smaller European countries have expertise in niche areas of energy transition, green hydrogen, renewables, climate change, and so on which can contribute to India’s development efforts. As India too is committed to climate change issues, energy transition, renewable energy and green hydrogen, such cooperation creates a synergy with India’s own efforts.

In Germany, France and Denmark, the recent launch of the India-EU Trade and Technology Council which will foster high-level coordination on strategic aspects of trade, technology and security was positively mentioned. In all the capitals the Migration and Mobility Agreement to facilitate the movement of students, professionals and researchers was also noted positively, which is a gain for India. 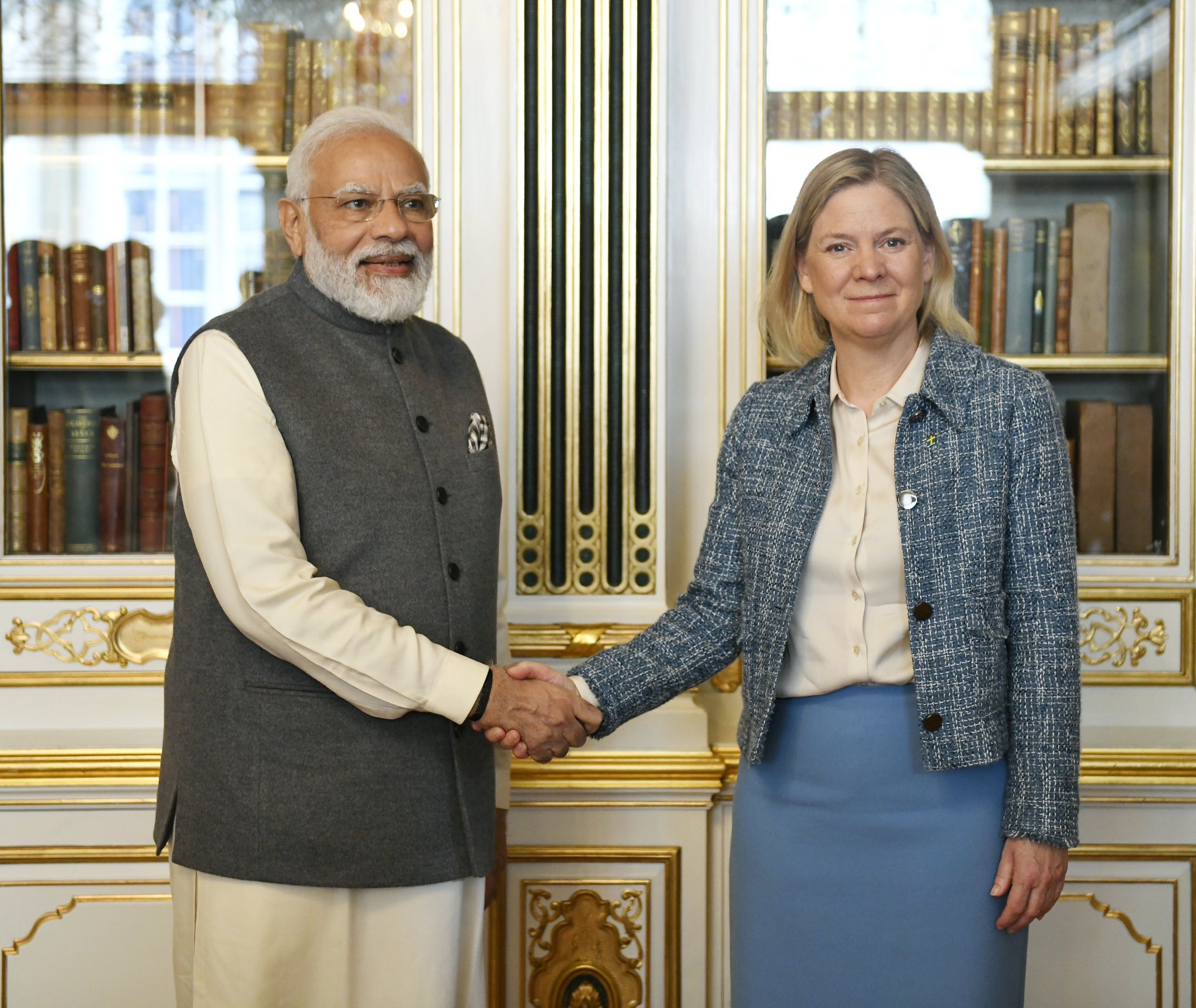 Germany and France will closely cooperate with India during its G20 presidency in 2023.

WTO reform and making supply chains more resilient, diversified and responsible were issues on which both sides agreed in Germany, though the German side included its pet caveats about “upholding international environmental, labour and social standards”. (Another pressure point Germany has brought into the discussions is the importance of strengthening bilateral cooperation in fighting child and forced labour). In Denmark also Modi and Frederiksen affirmed support for diversified, resilient, transparent, open, secure and predictable global supply chains as well as for WTO reform.

With a view to deepening security cooperation, India and Germany agreed to begin negotiations on an Agreement on the exchange of classified information and reconvene the Defence Technology Sub-Group meeting.

Defence ties with France are of a different magnitude than with Germany. Accordingly, the joint statement with France mentions the ongoing intense cooperation across all defence domains, noting that maritime cooperation between India and France has reached new levels of trust and will continue through exercises, exchanges and joint endeavours throughout the Indian Ocean. Based on their mutual trust, both sides agreed to find creative ways for France’s deeper involvement in the "Atmanirbhar Bharat” efforts in advanced defence technology, manufacturing and exports, including through increased industry-to-industry partnerships. Importantly, in order to address the contemporary challenges that have arisen in space, in particular maintaining secure access to space for all, India and France have agreed on setting up a bilateral strategic dialogue on space issues.

The two sides have launched a number of initiatives to connect their Start-up ecosystems. India will be the first Country of the Year at this year’s edition of Vivatech, Europe’s largest digital fair, in Paris. They have reiterated their willingness to deepen their cooperation on exascale technology, which includes making supercomputers in India. The two sides also agreed to work together for more secure and sovereign 5G/6G telecom systems. 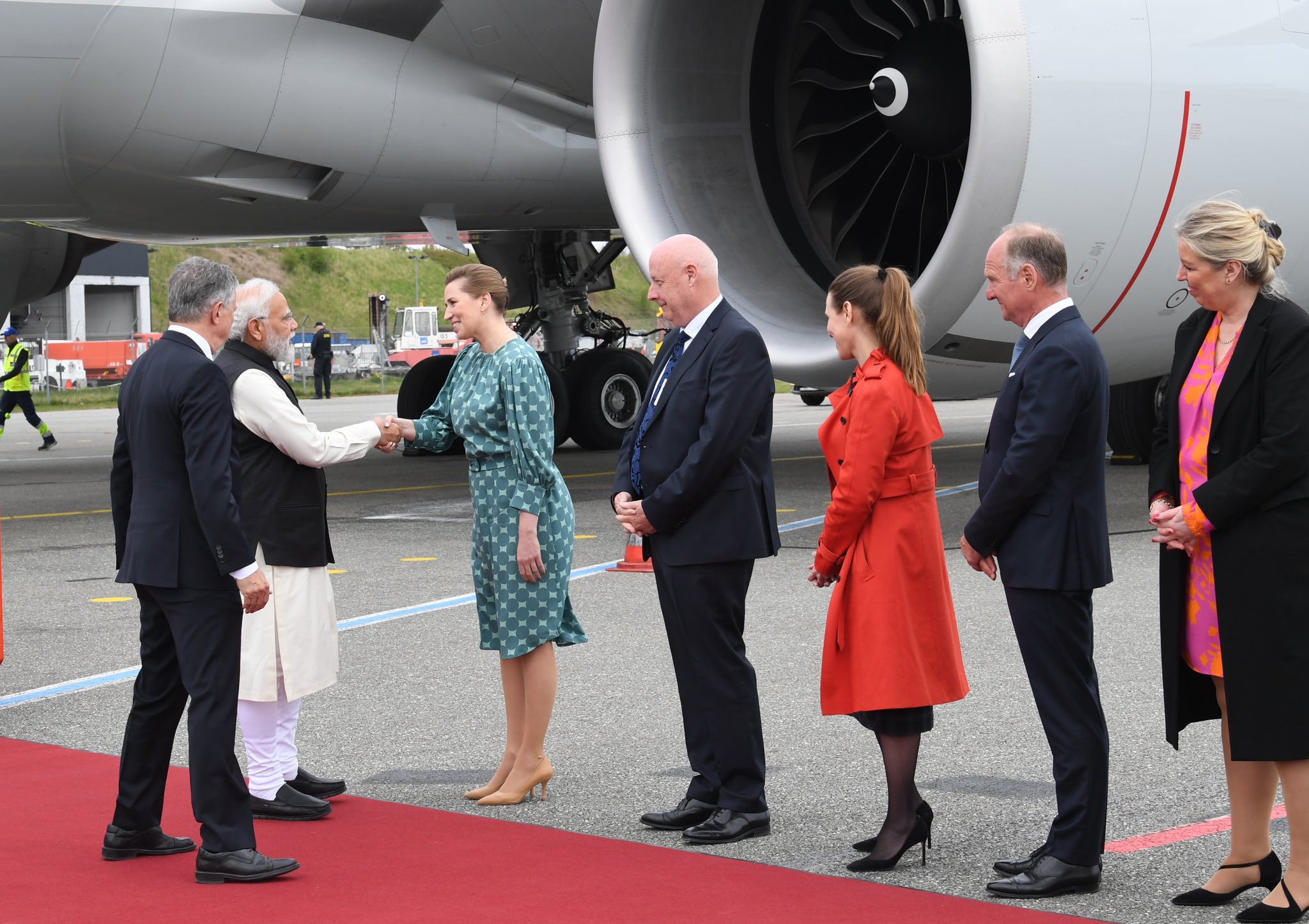 On Afghanistan, the language in the joint statements with Germany and France carries standard formulations. The language on terrorism, including the term cross border terrorism, used in the text with Germany meets our requirements, as also the reference to the FATF. With France the text is much more robust, stating that counter-terrorism cooperation is a cornerstone of the Indo-French strategic partnership, particularly in the Indo-Pacific region. The two sides strongly condemned all forms of terrorism including the use of terrorist proxies and cross-border terrorism and reiterated their resolve to closely work together in the common fight against global terrorism including by combating the financing of terrorism. Both sides will coordinate actively in the run-up to the third edition of the "No Money for Terror” international Conference to be hosted by India in 2022.

India has been invited to the G7 meeting to be presided over by Germany in June, contrary to speculation that India may not receive an invitation because of its stand on Ukraine.

Modi’s visit to Europe, despite the controversy over India’s stand on Ukraine, has underlined why both sides need each other in an increasingly uncertain global environment.

(The author is a former Foreign Secretary of India)