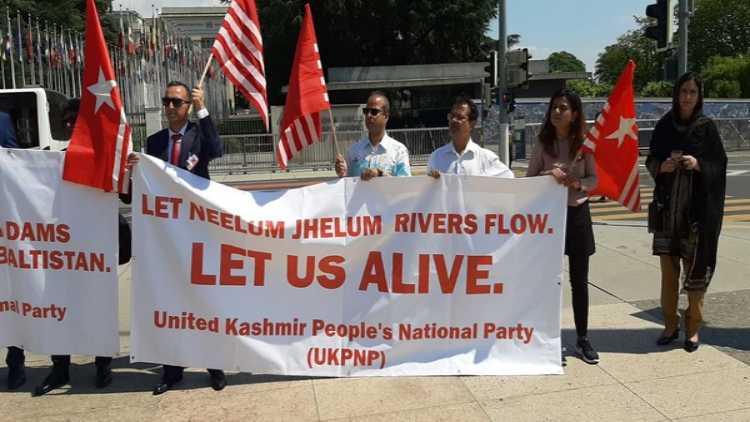 Protest against diversion of Rivers on POK

This is not the first time that social justice activists in PoJK have faced victimisation and it will most definitely not be the last. In the past, student activists of the Jammu Kashmir National Students Federation (JKNSF) have been arrested and tortured by the occupation forces.

Shamsher Ali Sher hails from a respected family of professionals in Nakyal in Kotli district. He is campaigning for the construction of safety walls at blind turns of the Nakyal-Kotli road that causes frequent road accidents. On December 31, 2020, a Nakyal-bound van carrying a family that was travelling back from Gujranwala, Punjab, lost control and fell hundreds of feet down into a ravine instantly killing three women and a man.

In another road accident on April 11, 2021, five members of a family lost their lives on the road. They were travelling from Nakyal to Kotli city. “These lives could have been saved provided there was a safety wall build at the dangerous parts and blind corners of the Nakyal-Kotli Road”, says Sher. Now, he fears for his life and rightly so.

In the past, Arif Shahid, a social activist from PoJK, paid with his life for raising his voice against social injustice. He was allegedly killed by an ISI hitman outside his house in Rawalpindi on May 14, 2013. Arif Shahid was campaigning against the bar on political parties to participate in general elections unless its candidates signed a document pledging allegiance to Pakistan.

In 2011, a doctor and a human rights activist from PoJK was gunned down by the Pakistani secret service the ISI.

Most recently Afzal Sulehria, a high profile political and human rights activist and leader of Kashmir National Party, became yet another victim of the ISI. Sulehria was a towering figure in Muzaffarabad, the capital city of PoJK. He vigorously campaigned against the diversion of Rivers Kishan Ganga (Neelum) and River Jhelum, and in December 2020 had written a letter to the Pakistan Army chief demanding work on  all the under-construction hydropower projects to be brought to an instant halt and deals made between the government of Azad Kashmir and Chinese construction companies are made public. In February 2021, less than two months after he had written to the Army Chief, Sulehria died of a mysterious heart attack. No autopsy was carried out.

It is not uncommon for human rights and political activists such as Shamsher Ali Sher to face persecution for being involved in campaigns that attempt to address issues regarding public interest in PoJK. Those who have raised their voice against the colonial rule of Pakistan since October 1947, when Pakistan attacked the state of Jammu and Kashmir and forcefully annexed western parts of Jammu province as well as Gilgit Agency, unfortunately share the same fate. Human Rights Watch report sums up the ordeal we face in PoJK most convincingly as follows:

“The Pakistani government in Islamabad, (read military establishment), the Pakistani army and the Pakistani intelligence services (Inter-Services Intelligence, ISI) control all aspects of political life in Azad Kashmir (PoJK)... Azad Kashmir is a land of strict curbs on political pluralism, freedom of expression, and freedom of association; a muzzled press; banned books; arbitrary arrest and detention and torture at the hands of the Pakistani military and the police. Singled out are Kashmiri nationalists who do not support the idea of Kashmir's accession to Pakistan.”

(Dr Amjad Ayub Mirza is an author and a human rights activist from Mirpur in PoJK. He currently lives in exile in the UK)