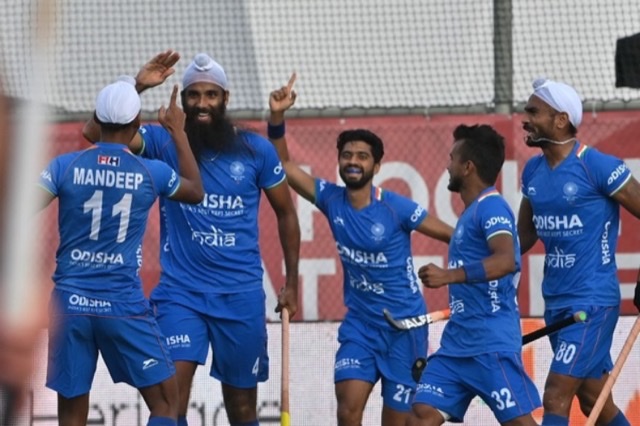 It was a penalty stroke save by Sreejesh off an attempt by Nicolas de Kerpel during the shootout that ensured India were victorious while Harmanpreet Singh, Abhishek, Lalit Upadhyay, Shamsher Singh and Akashdeep Singh converted for India.

Earlier during the regulation time, Indian Men's Hockey team held their nerves, making a brilliant comeback in the final quarter to overcome a 1-3 deficit only to hold Belgium 3-3 and take the encounter to a thrilling shootout. Both teams lived up to the billing as their built on their rivalry from hooter to hooter in a packed stadium. It was goals from Harmanpreet Singh (52') and Jarmanpreet Singh (57') that brought India back to the game in the fourth quarter after Shamsher Singh (18') opened the scoreboard in the second quarter while Cedric Charlier (21'), Simon Gougnard (36') and Nicolas de Kerpel (51') scored for the reigning Olympic Champions.

It was a high-voltage start to the match with both teams getting off the blocks with aggression and speed in their attack. It was India who made inroads to the striking circle, with a successful penetration that saw them win the first PC of the match as early as the 5th minute. But Jugraj Singh's attempt was well defended by a strong Belgian defence. Three minutes later, experienced forward Akashdeep Singh made a skillful foray into the striking circle but his valiant field goal attempt was off target.

A defensive error by young Jugraj Singh trying to stop Belgium attacker from taking a potential shot on goal saw India conceding a PC with just four minutes left for the first hooter. However, a brilliant effort by Sreejesh who dived low to stop Tom Boon from converting worked splendidly, to keep the score at 0-0. The first quarter belonged to the experienced Indian goalkeeper who made another great save off Alexander Hendrickx's attempt at a PC. It was finally Shamsher Singh who broke the deadlock when he picked up a rebound from Abhishek to score the goal in the 18th minute.

Only three minutes later, Belgians showcased brilliant teamwork and one-touch hockey skills to slice through the Indian circle and beat Sreejesh with a fine field goal, leveling the score to 1-1. Belgium rallied on home support as they built on the momentum in the third quarter to score in the 36th minute, while India fell back a tad bit with none of their attacking formations fetching a goal. Though they made excellent circle penetrations, they could not beat the Belgian goalie who was bang on target. But India launched a resilient attack in the final quarter, pushing for goals.

A deliberate infringement by Belgian defender when Manpreet Singh was forcing himself into the circle got India an opportunity as they were awarded a penalty stroke. Harmanpreet made no mistake in converting the goal in the 52nd minute to reduce the goal deficit to 2-3. With 7 minutes to go, a PC awarded to India went begging when Harmanpreet's powerful flick was brilliantly saved by Belgium keeper. India continued to create great chances but it was finally a superbly worked PC battery where Jugraj faked a drag flick, passing the ball to Jarmanpreet Singh who scored from the effort and ending the 60 minutes at 3-3 stalemate. "It was a great collective effort from us, and we kept on fighting.

They are the World Champions and Olympic Champions; we never took a single second easy in the match and that is how we stayed in the game. It was all about energy. Tomorrow too, we can't make a single error against a team like Belgium who have great support here in Antwerp," expressed Sreejesh after the win.