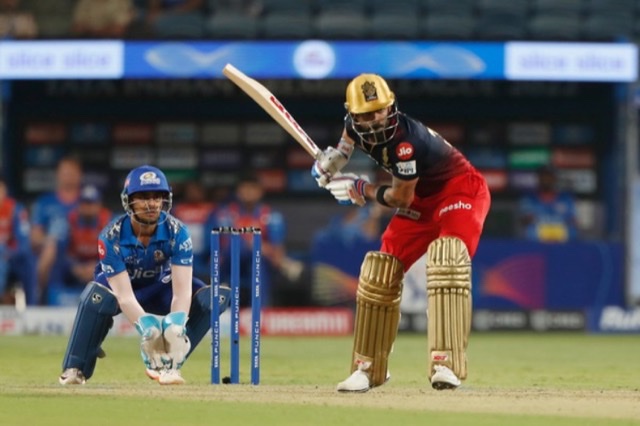 A moment from the RCB-MI match

RCB opener Anuj Rawat smashed 66 runs off 47 balls while former skipper Virat Kohli played a knock of 48 as they chased down the target of 152 with nine balls left. Earlier, RCB bowlers restricted five-time champions MI to 151/6. This is Mumbai Indians' fourth successive loss in the Indian Premier League 2022.

Chasing 152, RCB openers Faf du Plessis and Anuj Rawat had a good start as they gathered 27 runs in the powerplay. du Plessis and Rawat took their side to the 50-run mark in just eight overs.

The duo stitched a brilliant partnership of 50 runs and provided the Royals with great momentum. Mumbai Indians got a breakthrough when Jaydev Unadkat dismissed du Plessis, who got caught by Suryakumar Yadav, after scoring 16 runs in the ninth over with the team's total at 50/1. Rawat was then joined by Virat Kohli and kept the scoreboard moving for RCB. The duo kept scoring runs for RCB at a decent pace as their score read 61/1 at halfway of the match. Jasprit Bumrah was brought back in the attack but could not do much as Anuj Rawat notched up his maiden half-century in 38 balls.

The pair kept on hitting boundaries and sixes to take Bangalore's total beyond the triple-figure mark in the 14th over. Kohli anchored the innings and kept on thrashing Mumbai bowlers at regular intervals. The duo took the attack to MI bowlers for their rapid fifty-run partnership. After the 16th over RCB needed 30 runs. MI removed both set batters Anuj and Kohli in next two overs but till then it was too late to make a comeback in the match. Dinesh Karthik and Glenn Maxwell remained unbeaten to make sure that RCB cross the finish line without any further hiccups.

Earlier, Suryakumar Yadav smashed an unbeaten 68 to help Mumbai Indians reach 151/6 against Royal Challengers Bangalore. For the Challengers, Harshal Patel and Wanindu Hasaranga bagged wickets while Akash Deep was the most economical bowler of the lot. Put into bat first, MI got off to a great start, scoring 49/0 in the powerplay. But RCB fought back well to reduce Mumbai Indians to 79/6.

The Challengers might have fancied their chances to restrict MI to a paltry total but Suryakumar had different ideas. The stylish batter played a gem of a knock, notching up his second successive fifty of the tournament. As a result of his innings, Mumbai managed to breach the 150-run mark. Brief score: Mumbai Indians 151/6 (Suryakumar Yadav 68*, Rohit Sharma 26; Harshal Patel 2-23) vs Royal Challengers Bangalore 152/3 (Anuj Rawat 66, Virat Kohli 48; Jaydev Unadkat 1-30).