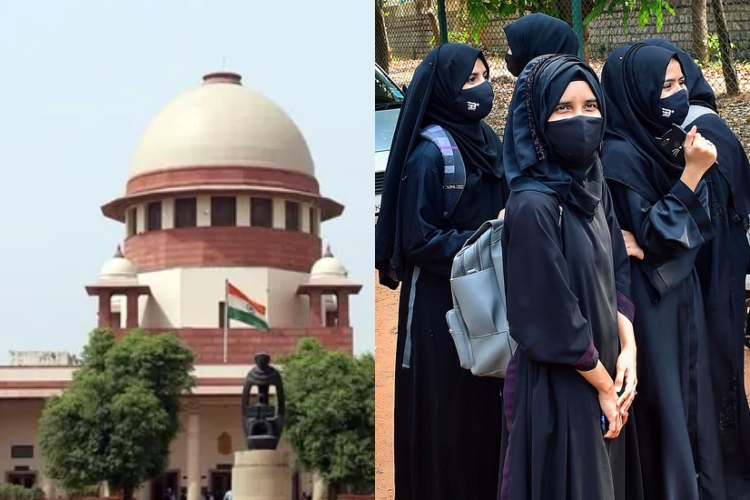 The Supreme Court on Thursday pronounced a split verdict in the Karnataka Hijab ban case.

A bench of justices Hemant Gupta and Sudhanshu Dhulia pronounced the judgement.

Justice Hemant Gupta dismissed the petitions against the hijab ban, while Justice Sudhanshu Dhulia allowed them.

One of the lawyers representing the petitioner said that the matter will be placed before the Chief Justice of India and he will decide whether a new bench will hear the matter or the matter gets referred to a larger bench.

Justice Gupta said, "There is a divergence of opinion. In my order, I have framed 11 questions. First is whether the appeal should be referred to the Constitution Bench."

"It's a matter of choice, nothing more nothing less," Justice Dhulia said while pronouncing the order.

The apex court had earlier reserved its order on various petitions challenging Karnataka High Court upholding the ban on hijab in educational institutes.

The arguments in the matter went on for 10 days in which 21 lawyers from the petitioners' side and Solicitor General Tushar Mehta, Additional Solicitor General KM Nataraj, Karnataka Advocate General Prabhuling Navadgi argued for the respondents.

A bench of Karnataka High Court comprising Chief Justice Ritu Raj Awasthi, Justice Krishna S Dixit, and Justice JM Khazi had earlier held that the prescription of uniform is a reasonable restriction that students could not object to and dismissed various petitions challenging a ban on hijab in education institutions saying they are without merit.

The hijab row erupted in January this year when the Government PU College in Udupi allegedly barred six girls wearing the hijab from entering. Following this, the girls sat in protest outside the college over being denied entry.

After this, boys of several colleges in Udupi started attending classes wearing saffron scarves. This protest spread to other parts of the state as well leading to protests and agitations in several places in Karnataka.

As a result, the Karnataka government said that all students must adhere to the uniform and banned both hijab and saffron scarves till an expert committee decided on the issue.