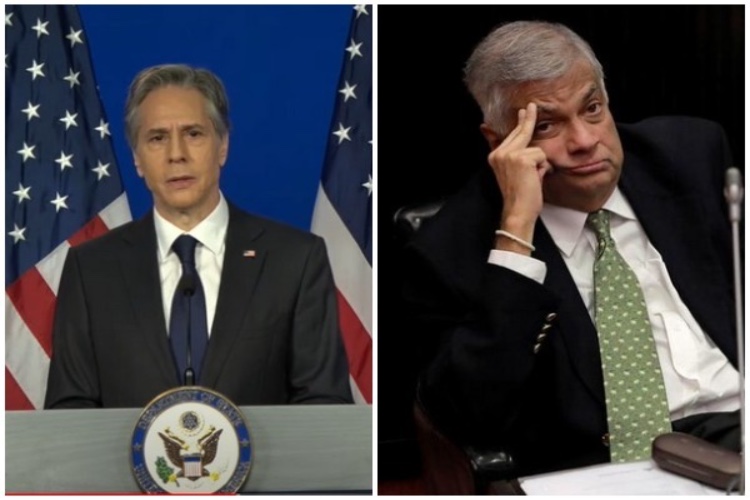 Blinken spoke with Sri Lankan PM Ranil Wickremesinghe and affirmed the US commitment to the Sri Lankan people during this challenging time and the importance of supporting reforms that address the concerns of all Sri Lankans, including on democratic governance and human rights, read US Department of State press release. The Sri Lankan economy has been facing a crisis owing to a serious Balance of Payments (BoP) problem.

Its foreign exchange reserves are depleting rapidly and it is becoming increasingly difficult for the country to import essential consumer goods. The current Sri Lankan economic crisis is the product of the historical imbalances in the economic structure, the International Monetary Fund (IMF)'s loan-related conditionalities and the misguided policies of the past governments.

The Easter bomb blasts of April 2019 in churches in Colombo resulted in 253 casualties, consequently, dropping the number of tourists sharply leading to a decline in foreign exchange reserves. The newly led government by Gotabaya Rajapaksa in 2019 promised lower tax rates and wide-ranging SoPs for farmers during their campaign. The quick implementation of these ill-advised promises further exacerbated the problem. The COVID-19 pandemic in 2020 made the bad situation worse - Exports of tea, rubber, spices and garments suffered; Tourism arrivals and revenues fell further.

Due to a rise in government expenditures, the fiscal deficit exceeded 10 per cent in 2020-21, and the debt to GDP ratio rose from 94 per cent in 2019 to 119 per cent in 2021. Sri Lanka's fertiliser ban in 2021, all fertiliser imports were completely banned and it was declared that Sri Lanka would become a 100 per cent organic farming nation overnight. This overnight shift to organic fertilisers heavily impacted food production. Consequently, the Sri Lankan President declared an economic emergency to contain rising food prices, a depreciating currency, and rapidly depleting forex reserves.

The lack of foreign currency, coupled with the disastrous overnight ban on chemical fertilisers and pesticides, has sent food prices soaring, pushing millions of poorer Sri Lankans to the brink.