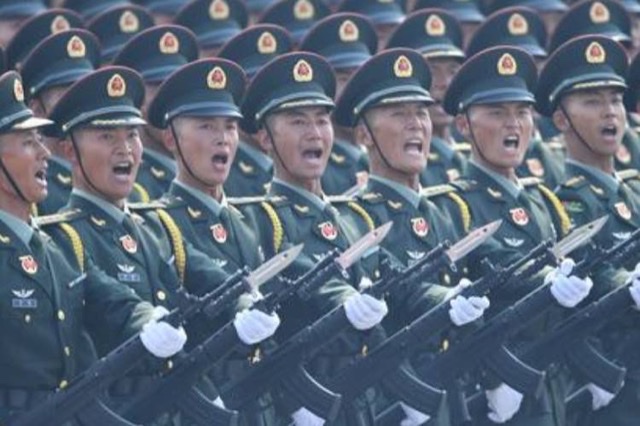 Amidst the gravity of bitter fighting in Ukraine as President Vladimir Putin prosecutes his invasion, China announced its defence budget for 2022 on the opening day of its fifth annual session of the 13th National People's Congress (NPC).

Usually these annual announcements of Chinese military spending grab headlines, but in 2022 the 7.1 per cent rise in Beijing's defence expenditure is overshadowed by war in Europe.

In monetary terms, China's 2022 defence spending is CNY1.45045 trillion (USD229.39 billion). Indeed, the budget revealed on 5 March confirms a continuing rebound in expenditure. Last year, China increased spending by 6.8 per cent to CNY1.355 trillion (USD209.4 billion). The overall increase of approximately USD20 billion this year is actually the largest ever (the second largest was USD13.4 billion in 2021, and the largest was USD13.6 billion in 2014).

Two years ago, China approved just a 6.6 per cent increase in defence spending, which represented a dip due to the onset of COVID-19. In preceding years, the budget had risen 7.5 per cent (2019) and 8.1 per cent (2018) annually. Furthermore, this is the seventh year in a row where the defence budget has risen in only single-digit percentages, underscoring that the halcyon days of double-digit growth are long gone. The pretty consistent year-to-year gains for defence expenditure also underscore that the PLA is at heart a political entity.

Threat perceptions may change over time, but China continues to prioritize spending on the People's Liberation Army (PLA) no matter what reason it ascribes to the growth. Typically it paints a narrative that China is merely reacting to events around it, rather than the fact that Chinese spending is ringing alarm bells across the world. Anonymous "analysts" quoted by China's parochial Global Times said the budget was "steady and reasonable at a time when China needs to modernize its military capabilities to safeguard national sovereignty and territorial integrity amid severe external threats and an unstable security environment". Chinese commentators also quoted "provocative" US actions such as sailing warships - entirely legally, it must be added - through the Taiwan Strait or South China Sea. The border stand-off with India has not been solved either, even after nearly two years, and this requires money to sustain. Chinese analysts asserted that, despite "military threats posed by the US and others, China is not interested in joining an arms race, and the country's defence policy is defensive in nature".

Such an argument is not sustainable, however. Putting it in perspective, this year's USD20 billion lump-sum increase eclipses Taiwan's total defence budget of USD15.4 billion. To compare further, current Chinese spending is greater than that of India (USD64.8 billion), Japan (USD55 billion), Russia (USD66.8 billion), South Korea (USD48 billion) and Taiwan combined. In future, the Chinese Communist Party (CCP) will expect more from the PLA in terms of military capabilities, so it can maintain pressure on neighbours like India, South China Sea claimants and the USA. Chinese leaders affirm they are willing to use violence to maintain (i.e. extend) their territory, so the PLA must be a credible tool and deterrent.

The PLA must be ready to achieve the CCP's political objectives, plus it will demand ever greater political loyalty and commitment. There is a stark difference between the PLA and the quality of confused Russian conscripts who now find themselves in Ukraine. It is drummed into the PLA that they must serve Xi Jinping, the CCP and nation. With such strong ideological indoctrination, there will be no hesitation among Chinese soldiers if ordered to attack Taiwan, for example. Incidentally, Chinese central government spending on public security will increase 4.7 per cent to CNY194.993 billion in 2022. However, this figure does not incorporate considerable provincial spending on public security and policing. If regional spending is included, the internal-security budget would overtake total PLA spending.

The defence budget is yet to be approved by Chinese lawmakers, but this will be a mere formality for a rubber-stamp Congress that has no real power. China possesses the second-highest defence budget in the world behind the USA, though Beijing still spends less than a third of what the USA does. President Joe Biden is seeking a budget of some USD770 billion for the forthcoming fiscal year. In fact, the USA spends more than the rest of the ten highest countries combined, which is a sign that the USA remains the only true superpower. Of course, it is difficult to directly compare China and the USA.

The PLA benefits from a non-market economy, where equipment is cheaper and the military has greater purchasing power than in competitive markets like the USA. Consider that the USA also deploys troops and assets globally, whereas China's primarily remain at home. Shrouded in secrecy, China gave no details as to how money will be allocated. It is estimated that approximately 40 per cent goes on equipment, both new material and to sustain existing inventories. Total secrecy makes it impossible to accurately guess what China's actual defence budget is.

Many areas such as China's space program, extra-budgetary revenues from military-owned commercial enterprises, defence mobilization funds and provincial military base operating costs are not reported in its defence budget. Supplemental funding like military pensions and benefits, civilian/dual-use research and development, and Central Military Commission responsibilities like the People's Armed Police and China Coast Guard are not part of the defence budget either. Both the latter paramilitary organizations would support the PLA in time of war. Foreign analysts agree that the true budget is much higher than the declared amount, though there is debate as to how much.

Some estimate the real budget is 25 per cent more than claimed, while others argue it could be nearly 40 per cent. Undoubtedly, the difference between Chinese and American spending is a lot less than appears on paper. The Russia-Ukraine conflict had no bearing on China's budget, for it was drafted before Putin invaded Ukraine. In fact, China's financial year starts on 1 January, so the defence budget was decided well in advance of the NPC session.

Beijing stated in its Government Work Report: "In 2021, China made major strides in strengthening national defence and the armed forces, getting off to a good start in this endeavor in the 14th Five-Year Plan period, and in 2022, China will work toward the goals for the centenary of the PLA in 2027, enhance military training and combat readiness, stay firm and flexible in carrying out military struggle, and safeguard China's sovereignty, security and development interests."

That work report added that the PLA would move faster to modernize military logistics and asset management systems; build a modern weaponry and equipment management system; continue to reform national defence and the military; step up innovations in defence science and technology; implement a strategy of strengthening the military by training competent personnel in the new era; run the military in accordance with the law and strict discipline; promote high-quality development of the military; and improve the layout of defence science, technology and industry. Fruit to be seen this year will be the launch of the PLA Navy's next-generation aircraft carrier, the Type 003, currently under construction. It differs from two in- service carriers in that it dispenses with a ski jump ramp and instead uses catapults to launch aircraft. Other 2022 priorities are increased production of J-20 stealth fighters and modernization of the PLA Rocket Force's nuclear arsenal.

The PLA and its political masters will be watching the war in Ukraine with acute attention. Just as China carefully studied lessons from two US-led wars against Iraq in 1990-91 and 2003, so too for years it will be combing over the results of this bitter war between two near-peer adversaries. Xi already looked down on Russia for the way communism succumbed and crumbled there. The CCP will probably view with disdain the Russian military and how it has atrophied through low morale, lack of political purpose and under investment. On paper, the Russian armed forces look strong, but in fact the military's capability has been somewhat hollowed out. CCP buzzwords are mechanization, informationization and intelligentization, three prongs of the PLA's modernization as it seeks to dominate the digital, cyber and networked world of military operations. These are some of the areas where Russia is falling down, particularly in terms of joint warfare.

The latter is a priority for the PLA, even if it still has a long way to go to coordinate land, sea and air forces into a coherent and integrated force. In other lessons, Russian logistics have performed poorly, with vehicles bogging down off main roads, supply columns ambushed and vehicles running out of fuel. This is despite the fact that the Russian Army was able to launch its invasion by simply driving across land borders.

This is far different for China in any operation against Taiwan, where the 180km-wide Taiwan Strait must first be crossed by air or water. Poor use of Russian airborne troops has ended in ignominious defeats, which will be another lesson closely observed by the PLA. Russia is yet to launch a concerted amphibious invasion, something that China will be keen to observe, even if it comes at steep Russian expense. Putin's choice of strategy will also be questioned. He did not set the prerequisite political and social conditions for an invasion of Ukraine, as evinced by mass protests by the Russian populace. China certainly will not make that mistake, as for years it has been warmongering and shaping Chinese people's acceptance of the need to subjugate Taiwan militarily if necessary. Nor did Russia kick off its campaign with "shock and awe" operations, which means Ukrainian aircraft and air defences are still active days into the war. Inadequate stocks of cruise missiles and air-to-ground precision-guided munitions are also evident, along with a need for airborne intelligence, surveillance and reconnaissance.

Ukraine is 16 times Taiwan's size, yet Russia fired only 600 or so cruise or short-range ballistic missiles in the first ten days. China would be able to concentrate against Taiwan this amount of missiles in a first attack wave alone. The PLA has prioritized airborne command and control over the past couple of decades with platforms like the KJ-500 aircraft, plus it is introducing electronic warfare aircraft like the J-16D and various Y-8/Y-9 types. The PLA Air Force has more than 700 modern fighters in service already. China has many air-launched cruise missiles and ballistic missiles but, significantly, its stocks of precision-guided munitions are limited. It has only one type of 500kg laser-guided bomb in service, for example.

For many tasks, a 500kg bomb is overkill, and China is yet to commit to a line of 250kg and 100kg precision-guided munitions so it would have to rely on dumb bombs and unguided rockets. Therefore, smaller bombs mounted on racks are a desirable package for Chinese strike aircraft, with advantages that more individual bombs can be carried per sortie, and leaving larger and expensive missiles for more important targets.

Perhaps we will see China boost its precision-guided munitions stocks in the wake of Russian failings, especially since Chinese industry already has smaller precision-guided munitions available for export. The PLA has plenty of strike aircraft to carry such precision-guided weapons, including nearly 100 J-20, 200 J-16, 250+ J-10B/C and 300+ J-10A fighters; 200+ JH-7A fighter-bombers; and 120 H-6J/K/N bombers, many with targeting pods. Add to this, drones like the WZ-7 and Wing Loong 1/ 2 family, and one can see that China could deliver a deluge of weapons on Taiwan early on in a future conflict.

Another surprise for Russia and China is the severity of international opprobrium at an unprovoked war, and how NATO and Europe have closed ranks in support of Ukraine. This goes somewhat against the Chinese and Russian narrative that the West is in decline, and that the East is inexorably rising.