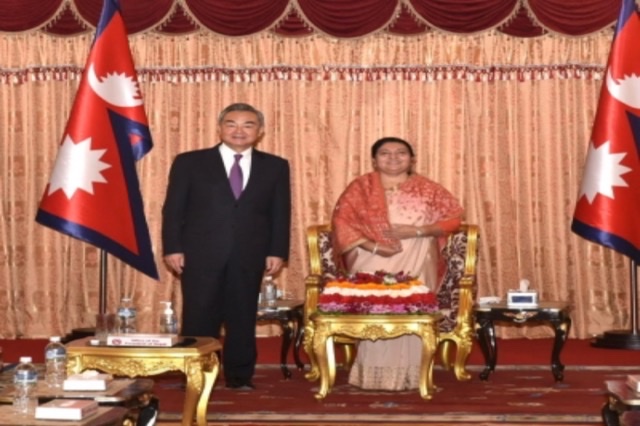 During their meeting, President Bhandari conveyed to the Chinese Minister, who is also the State Councillor, that Kathmandu attaches great importance to bilateral ties and thanked the Beijing government for its support to the Himalayan nation.

When he met Oli and Dahal, Wang said the Americans were moving forward strategically and entering countries around China under different strategies. "The Americans are strategically entering countries around China under various names, that is why the US is increasing its influence through military tactics. They want to enter China," the Foreign Minister said, adding that they are not able to build inroads inside China because of good neighbours like Nepal.

The unity of the Chinese people has not made the US plan a success, he said. Wang said his country was happy with Nepal's 'One-China' policy. Wang, who landed in Kathmandu on Saturday from New Delhi, held meetings with Prime Minister Sher Bahadur Deuba and his Nepali counterpart, Narayan Khadka shortly after his arrival. During the delegation level talks between Khadka and Wang, Nepal and China signed nine agreements related to health, infrastructure and others.

According to China's Xinhua news agency, Wang told Khadka that China will work with Nepal to safeguard the principle of non-interference in internal affairs and the basic norms governing international relations, resist unilateralism and oppose power politics, and contribute to regional peace and stability. "China supports Nepal in furthering participation in the Belt and Road Initiative (BRI). China and Nepal have made encouraging progress in jointly building the Belt and Road, which has significantly boosted Nepal's national construction."

Nepal had signed the BRI in 2017 but not a single project has taken up due to various reasons. Prime Minister Deuba while reiterating Nepal's long-standing 'One-China' policy, said his country is looking for more investment and grant-based projects from Beijing. "Nepal is cautious while dealing with BRI related projects because it has huge loan components and Nepali officials have been saying that Nepal is not ready to take loans based on high interest rates.

During the meeting between Oli and Wang, discussions were held on implementation of agreements signed between Nepal and China under the BRI," said UML Foreign Department Chief Rajan Bhattarai. The Nepali leaders told Wang to resume the two major border points for trading with Nepal that have been restricted vehicular movement since the onset of the Covid-19 pandemic .