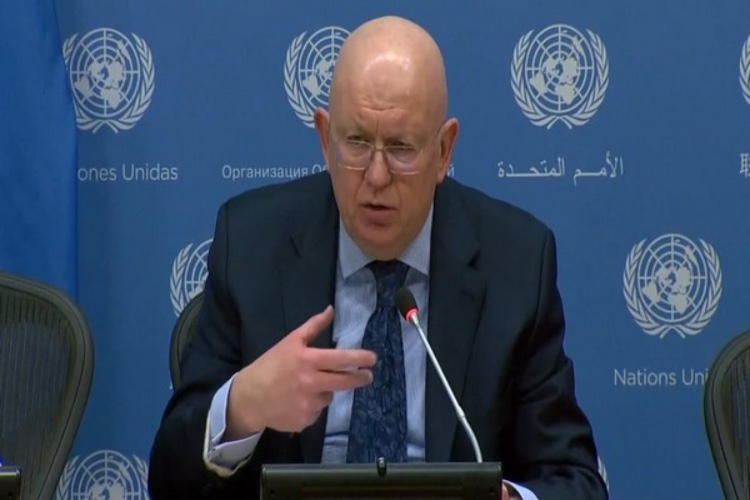 Accusing the United States of developing components of biological weapons in labs in Ukraine, Russia on Friday supported China's demand at the UNSC asking the Americans to disclose information about the activities of 360 labs in the world that are allegedly controlled by the country.

"Over the past week, we have discovered new details indicating that components of biological weapons were being developed in Ukraine," said the Permanent Representative of Russia to the UN Vassily Nebenzia, adding later that, "we fully support China's demand to the United States to disclose information about activities of 360 US-controlled labs in the world."

The Russian representative gave details of financial aid channelled to select labs in Kyiv, Kharkiv, Odesa, Lviv and said that the Ukrainian authorities were in cahoots with the Americans to carry out dangerous biological experiments on Ukrainian territory. "Simply speaking, Ukrainian authorities gave Pentagon a carte blanche and let them carry out dangerous biological experiments on the territory of Ukraine," Permanent Representative Nebenzia said.

"We would not be surprised should similar facts come to light regarding the activity of US-sponsored labs in other parts of the globe. We call on states who provide their areas to Pentagon for such experiments to read carefully contract documents regarding their cooperation with the United States in the biological area," Nebenzia further said. The Russian representative went on to allege that the US and Ukraine had violated the Biological and Toxin Weapons Convention (BTWC), adding that, the implications of the dangerous biological research "could have 'spilled' beyond the borders of Ukraine and even the entire region at any point."

Earlier, the Russian Embassy in the US had demanded that the United States must immediately disclose information about its military biological activities in Ukrainian laboratories. "We demand that the US Side disclose information about military biological activity in laboratories on the territory of Ukraine as soon as possible. What kind of peaceful research we are talking about if the Pentagon stands behind these projects," the embassy wrote on its Telegram channel.

India had noted the remarks made by the UN Under-Secretary-General of Disarmament Affairs, Izumi Nakamitsu regarding biological activities relating to Ukraine and said that "India attaches high importance to the Biological and Toxin Weapons Convention (BTWC) as a key global and non-discriminatory disarmament Convention, prohibiting an entire category of weapons of mass destruction." R Ravindra, Deputy Permanent Representative at UNSC briefing said, "It is important to ensure full and effective implementation of the BTWC in letter and spirit. We also believe that any matter relating to obligations under the BTWC should be addressed as per the provisions of the Convention and through consultations and cooperation between the parties concerned."

Earlier in March, the Russian Defense Ministry unveiled new findings after analyzing documents obtained from experts from Ukrainian laboratories. Igor Kirillov, the chief of the Russian armed forces' radiation, chemical, and biological defence, said that Pentagon created a network of over 30 biological laboratories in Ukrainian territory.

According to Kirillov, the United States removed all materials necessary for further research from Ukraine after the beginning of Russia's special military operation. Russian Foreign Ministry spokeswoman Maria Zakharova said that Moscow may launch a consultation mechanism under the Biological and Toxin Weapons Convention (BTWC) to discuss Washington's non-compliance with the document. However, a US Defense Department official denied the accusations saying the United States is not assisting Ukraine with biological weapons in its war with Russia and there are no indications that biological weapons are being used by Ukraine.

Russia had started a special military operation in Ukraine on February 24 in response to calls from the Ukrainian breakaway regions of Donetsk and Luhansk people's republics for protection against intensifying attacks by Ukrainian troops. The Russian Defence Ministry said the special operation was only targeting Ukrainian military infrastructure and the civilian population was not in danger. Moscow has repeatedly said it has no plans to occupy Ukraine and only seeks to "demilitarize" and "denazify" the country. Western nations have imposed severe sanctions on Russia following the invasion and have raised an outcry over Russian "war crimes" and the humanitarian crisis in Ukraine.

Meanwhile, at least 6,623 people have been evacuated via humanitarian corridors from besieged Ukrainian cities on Saturday, according to Kyrylo Tymoshenko, a senior official in President Volodymyr Zelensky's office, CNN reported. Among the besieged cities, Mariupol is witnessing some of the most severe fighting with almost constant bombardment and increasing civilian casualties. A theatre sheltering civilians was bombed in Mariupol a few days ago which drew widespread condemnation. The bombing led to more than 1300 people getting trapped under debris, and one person receiving severe injuries. US Secretary of Defense Lloyd Austin said on Saturday (local time) that Russia continues to make "incremental gains" in Ukraine's south and has used "brutal, savage techniques'' in the way it has targeted civilians, CNN reported.