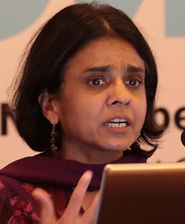 It seems that the entire edifice of an interdependent world is collapsing, and at a time when we need cooperation more than ever to address the existential crisis of climate change.

Roughly 30 years ago as our world embarked on the path to interdependency, it signed the free trade agreement and brought in rules on how it would operate commerce between nations. Then it brought in a slew of more agreements for everything from climate change to biodiversity to the global trade in hazardous waste, to stitch together a framework for an ecologically interdependent world.

The twin objectives were to spread prosperity by expanding the Western model of growth and then to manage the ecological fallout of this growth, across national boundaries. The underlying belief was this would bring democracy to all. People would get richer; and they would in turn shun barbaric tendencies and embrace human rights and freedom.

In the 1990s, when the Soviet Union collapsed and then in 2001, when autocratic communist China joined this democracy through trade project, the world rejoiced at the growth through consumption moments.

Today this project has come apart. And it is not just the horrific and inhuman invasion of Ukraine by Russia that has brought it to this head — insecurity in the supply of basic materials, from energy to food, is making countries shun global interdependence and shut doors.

Argentina, which produces 10 times more food than what its population needs, has now put a hefty tax on the export of beef, corn and soya from the country. Indonesia, the world’s top producer of palm oil — indicted for driving destruction of its tropical forests — has now sent shock waves as it has banned exports of this cooking oil.

Food security is suddenly about food sovereignty — something that all agribusiness-run countries and economies had dismissed. Then come the high energy costs — fuelled partly because of the sanctions on Russian oil and gas — that are driving the world to leapfrog to wind and solar. But it is a fact that much of the rare earth minerals that will be needed to power this new energy future — from petro to electro — are controlled by the same countries that are in the non-democracy camp, from China to Russia.

We also know that unemployment is already pushing countries to manufacture at home. We are closing borders; shutting doors of global trade and, worse, dividing and polarising the world into camps of good versus evil. This, please remember, is happening at a time when climate change needs us to come together to cooperate and act globally.

So, as we move ahead, let’s not make light of the mistakes of the past three decades. Let’s take stock of the state of the world so that we can do better.

The first problem has been the very premise of the globalisation project. It was not about building inclusive prosperity — it was about building commerce on the back of cheap goods and labour. Free trade economists — they are many and they are powerful — love to tell us how inefficient it is to grow wheat and rice where land is scarce or that without large holding agribusinesses do not thrive.

They tell us it is so much better to manufacture where the cost of labour is cheap and countries can avoid paying the price of environmental safeguards. This “cheapness” then means there are plentiful goods that feed our appetite for consumption.

There is no doubt that this economic thinking has made some in the world very rich. There is also no doubt that this thinking has made all countries lock into the business of competing for markets — at the cost of their labour or environment. It has also meant that the world is today at the precipice of a climate emergency — because it has never really reduced emissions but has only exported them to countries where manufacturing has moved.

It all started with the Arab Spring in 2010, when the power of social media was unleashed and it brought down what we said were dictators and despots. The world tasted blood. Now, the democracy project had another bow in its armour — this one, we believed, was the voice of people speaking out and driving change.

Today, this same tool of democracy has become so twisted and tainted that it can be used to push virulent and vicious hatred and evil with the force that we imagined it would push good.This is also happening because we believed (naively) that markets could replace governments and that social media was synonymous with democracy. This cannot be the way to our common future.

Let’s continue to discuss this.

(Sunita Narian is the Director General of CSE and editor of Down To Earth. This was first published in Down To Earth’s print edition and has been used with permission)