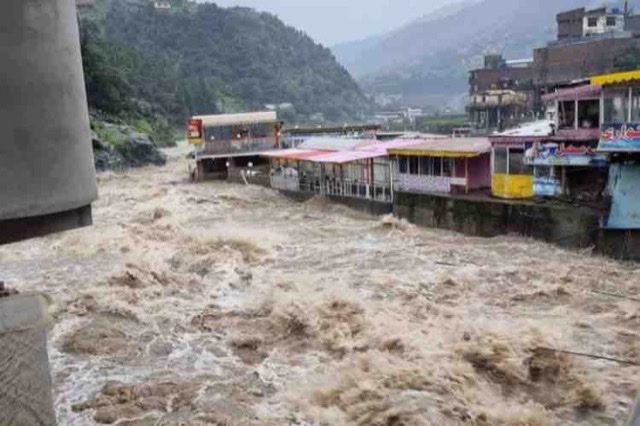 "Gravity of food & health challenges can be met through deeper cooperation from the world," he added. Earlier, the United Nations launched the revised flash appeal of USD 816 million to respond to the need of people affected by floods.

The revised '2022 Pakistan Floods Response Plan' (FRP) was shared with UN member states and humanitarian organizations in Geneva, according to United Nations Office for the Coordination of Humanitarian Affairs (OCHA). "The revised appeal urgently seeks USD 816 million to respond to the growing lifesaving needs of the people - a jump of USD 656 million from the initial appeal of USD 160 million," the OCHA said in a press statement.

This increase reflects the rising needs and the unprecedented scale of destruction caused by the current climate-induced disaster which has affected a population of 33 million, cost 1,600 lives and threatened hundreds of thousands more as a second disaster looms within the first one. Over 2 million homes have been destroyed or damaged, forcing people to live under open skies exposed to threats of dengue, malaria, and the biting cold of the fast-approaching winter.

This appeal focuses on providing urgent and lifesaving humanitarian assistance and protection to 9.5 million people until May 31, 2023, with a focus on the 34 most affected districts in Balochistan, Sindh, Khyber Pakhtunkhwa and Punjab. "This prioritisation is based on the number of houses damaged and destroyed, available projections of water level changes, and the population of displaced people in the districts. It aims to enable a more cohesive response for people in areas that have been most severely affected, and to foster a focused, multi-sectoral approach," the UN agency said.

Pakistan Climate Change Minister Sherry Rehman headlined the unimaginable scale of loss and damage caused by unprecedented climate-induced floods in Pakistan. She highlighted that the scale of a catastrophe had gone beyond all previous climate disasters, affecting a population larger than the size of many countries. She referred to the continued inundation of large swathes of the country in pestilent water, pointing to the health risks such flooding posed.

The Under-Secretary-General for Humanitarian Affairs Martin Griffiths in his remarks said, "People in Pakistan are bearing the brunt of the climate crisis, where catastrophic flooding has taken a devasting toll on the most vulnerable. We are now in a race against time ahead of the winter season and funding is now urgently needed so humanitarians can prepare to respond to rising health, hunger and other debilitating needs."

Earlier, it emerged that Pakistan and the United Nations (UN) will jointly launch an up-scaled flash appeal in Geneva for $800 million on the basis of an updated on-ground need assessment of the flood situation in the country. The WHO Director-General Dr Tedros Adhanom Ghebreyesus said, "The water has stopped rising, but the danger has not, we are on the verge of a public health disaster. Many more lives than were lost in the floods could be lost in the coming weeks if we don't mobilize greater support for Pakistan."

"WHO will do everything we can to support the people of Pakistan now, and in the coming months and years as you recover and rebuild. And even as we respond to the emergency in Pakistan, we must remember that unless we address the existential threat of climate change, we will be responding to emergencies like this and worse more often," the WHO chief added.

An initial USD 160 million flash appeal was made to address immediate needs based on estimates a month ago. The international community's support for the initial appeal allowed the humanitarian community to respond to immediate life-saving needs.

However, the results of the recent needs assessments, that led to the up-scaling of the flash appeal to USD 816 million, revealed that much more was needed to save those struggling to survive the aftermath of the floods.