The concept of time has been of great importance to mankind. In the olden days, people used to measure time in different ways some through the sun’s movements and some relying on the clucking of the hen. The sun was the most important indicator of time. As time passed one of the earliest of all devices to tell time was the sundial.
Later mechanical clocks were used which were installed on huge tower structures so that people could see the time or hear the chime far away. Clock towers, therefore, became an integral part and were the means through which people got to know the time. However, as time passed the importance of clock towers decreased but the heritage value of these towers continue and many of these clock towers have become prominent landmarks in the cities and towns. Hyderabad too has many clock towers including the famed Clock Tower in Secunderabad or the famed Mahboob Chowk which is an important part of Hyderabad's architectural heritage. Hyderabad Clock tower
This tower is a five-story architectural clock tower that was built in 1892 by Asman Jah Bahadur, Prime Minister of Hyderabad, and has four large clocks on its sides which enabled the time to be seen from any direction.

With the Nizam of Hyderabad, Clock towers or “ghari chowk” were an important urban element during the time of the fifth, sixth, and seventh Nizam. They reflected a British influence and were designed to help people read time, as many people could not afford a watch in those days, and also added to the architectural wonder of the City. But over some time these clocks set in the Towers went defunct with not many to repair them as mechanical clock making has been the forte of the Germans Swiss, British, and the French historically. But here was an icon from Hyderabad Laxman Chugani Proprietor  Ramesh Swiss Watch Gallery in Secunderabad, who collected a piece of history every time he brought an antique mechanical clock to life or took the art of mechanical clock making and gave it a modern twist to keep them relevant in modern times.

Gulabrai Chugani and his children migrated from Hyderabad Sindh to Hyderabad Deccan during the partition and set shop in Hyderabad. A cloth shop Bombay Silk store near M.G.Road and since watches were an impeccable sartorial style of the noble rich and the famous  Gulabrai Chugani started a counter Opposite the Textile shop near an Ice Cream factory. At a chance meeting with the Nizam's son Prince Mozam Jah who was on the lookout for watches for his nurses, he came to their shop and there was no looking back. Prince Mozam Jah referred to Gulabrai as Ramesh and that’s how the Ramesh Watch Company was set up at MG. Road.

Laxman Chuggani was interested in servicing these watches and so apprenticed with HMT watches in Bangalore and later to Switzerland to master the art, a rarity in those days. He not only came back with the know-how of the making but also took agencies of Rado, Rolex, and many other imported watches. Laxman Chuggani a horologist, who is the only official service agent for Swiss watches and only one among few to know about Tower clocks was approached by Government to restore the clocks on these magnificent towers that surround the city.


Laxman is the first generation in his family to take up this unusual vocation of trudging from one Government establishment to other including railways churches, temples, golf clubs, winding wall clocks, mantle pieces, or taking them to his workshop for repairs. The toughest to repair was the Mozamjahi market which was a challenge. The clock was given to HMT for repairs but it continued to get defunct as the needle of the clock fell off each time. The company people blamed the falling of the huge needles of the clock on pigeons. Finally, Laxman Chugani took it as a challenge, and now the clock continues to show the time, and chime every year just like the Big Ben of London for the last several years and also glows during nighttime. 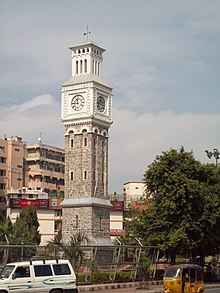 From here on Laxman Chugani has not only restored the Mozamjahi Tower clock but the Secunderabad Clock Tower, the Mahboob Chowk clock tower, the clock tower at sultan bazaar which is one of the biggest and most beautiful Heritage buildings and outstanding places in the times of Nizam. This clock tower in Sultan Bazaar has a prominent role in history. This was the place where the Indian national flag was first hoisted on the midnight of August 14, 1947, by a gallant locksmith Narsimhulu, braving the dire consequences of such a patriotic act in the state of Hyderabad, ruled by the Nizam.

Laxman Chugani has restored the clock tower at Jaymes Street Police station which was gifted in 1900 by Diwan Bahadur Ramgopal Seth, The Monda Market clock, and also Jail Khana located near the market. An 80-year-old house is probably the most ornate in the locality. The Secunderabad Railway station has an electro-mechanical clock which was installed atop the railway station by the Ramesh Watch company and is said to be one of the oldest ones in the city. The clock served as one of the key attractions at the railway station and was looked after by the Signal and Telecommunication wing for the past years.   He has installed clocks at the prestigious Hyderabad Public School in Ramanthapur, at the Race Course in Malakpet, MCEME Army, Railway Station at Nizamabad, Rotary club in Aurangabad, at the historic Kacheguda Railway Station, Fateh Maidan Club and many more.

Laxman Chugani is well known among all those “connoisseurs of time”  who own not only heritage wall clocks timepieces and wristwatches. Laxman Chuggani says he has immense admiration for how complexities are hidden in such beautiful designs of these clocks. It is like a living thing because you wind it or repair it, care for it and ultimately connect with it. For Laxman Chuggani restoring the clock tower is not about making money but loves giving life to old time units He painstakingly restores each tower and makes them tick again. Making clocks helps Laxman put all his creativity to use. I make them for myself for my passion he says pointing to centuries of clock-making techniques as inspiration for designing his mechanism and improvisation.