How should the Muslim leadership of India behave? This seems like a perennial question raised by analysts. Since I started reading newspapers, the same talk of forming a political party to raise ‘Muslim’ demands, strengthen ‘Muslim’ leadership within existing political parties or raise ‘Muslim’ issues in media have been doing the rounds. "Muslim issues' is the common thread running across all these debates.

Recently while looking into the files at the National Archives of India, New Delhi, I came across an interesting incident from October 1922, where Hakim Ajmal Khan showed the path Indian Muslim leadership should be taking all these years. The British Report mentions an alarming position taken up by Hakim Ajmal Khan at the Central Khilafat Committee (CKC) meetings held at his Delhi residence on 17, 18, and 19 October 1922. 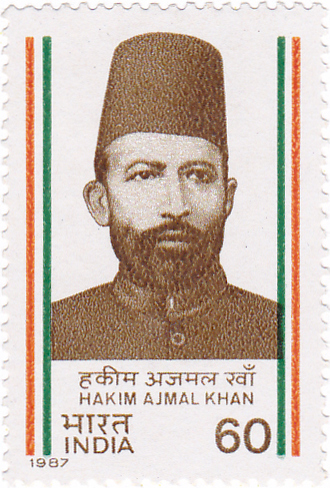 Hakim Ajmal Khan chaired the meeting and suggested that the Turkish issue should not be given a religious colour. He believed that instead of projecting it as a Muslim versus Christian, the problem should be presented to the public as Asia versus Europe. On 18 October, a proposal was moved that Indian Muslims should organise a militia to fight for Ataturk Mustafa Kemal Pasha, Ajmal Khan objected and said that the movement should not go beyond forming a public opinion against the British government.

It was argued that CKC could not recruit fighters to fight for Turkey because its primary goal had been “to better the condition of India and to secure Swaraj”.

It was decided, in the meeting, that a board would be formed to look into possible British attacks on Pasha and form a public opinion against those. Ajmal Khan again rose up in protest arguing, “if you want to work the movement, keep it as Asiatic Movement and not a religious movement”. On not getting a majority vote in support of his suggestion he gave up his membership on the board. He could not agree that within nationalist politics there was any space of ‘religious-political language. He set an example that was rarely emulated by Indian politicians during the next century.

The next day, on 19 October, CKC, with Ajmal Khan in the chair, passed a resolution unanimously which denounced the violence by Muslims against Hindus at Multan in September that year. The resolution read: “This meeting of the C.K.C deplores the regrettable happening at Multan. Especially the burning of Temples and Guru Granth Sahib, the robbing of helpless women, and attacks on houses of peaceful persons by some Mussalmans, which acts are repugnant alike to humanity and religion. The hooligans who committed these acts have dealt a severe blow to Hindu-Muslim unity. 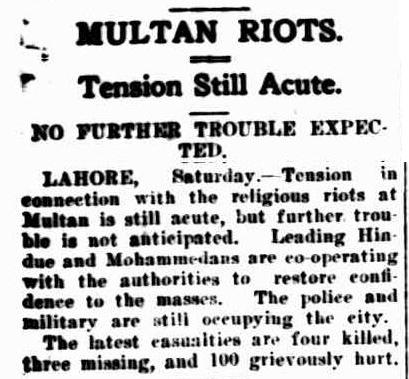 Newspaper clipping of Hakim Azmal Khan's time
This meeting, therefore, expresses its unqualified regret for the aforesaid misdeeds and sympathises with the Hindu brethren.”

In his address, Ajmal Khan blamed the Muslim high-handedness against Hindus in Multan for the trouble. He pointed out that while several temples were damaged by Muslim mobs, no mosque, even if amid a Hindu locality, was attacked. The leaders of the Muslim mob, according to him, were government servants and instigated violence to cause a rift between Hindu and Muslim nationalists.

It was also said that while Muslim rioters should be punished those Muslims who helped Hindus during those times and provided security to them were worthy of appreciation. The CKC noted that those Muslims who had stood up against the rioters to protect Hindus had acted “by Islamic injunctions and traditions, they have set an example of Muslim Chivalry”.

ALSO READ: Can the Partition of India be undone?