The world premiere of the Tom Cruise star vehicle, 'Top Gun: Maverick', at the 75th Cannes Film Festival on Wednesday night was a grand affair, topped up by the appearance of eight fighter jets spewing red, white and blue smoke (national colours of both France and the United States) behind them as members of the films cast looked on from below.

The actor received a thunderous ovation, reports 'Variety', after he was presented with a "surprise" Palme d'Or, one that genuinely seemed to take him off guard. He had received another ovation after making some spirited introductory remarks.

"This is an incredible evening and an incredible time ... just to see everyone's faces," Cruise said from the stage of the Palais du Festivals. "It's been 36 years since the first 'Top Gun' and we've had to hold it for years for the pandemic."

Cruise then called on the cast, which included Jennifer Connelly, Miles Teller, and Jon Hamm, and Paramount's executive team to stand up, as the audience cheered. "This movie was a dream," Cruise said. 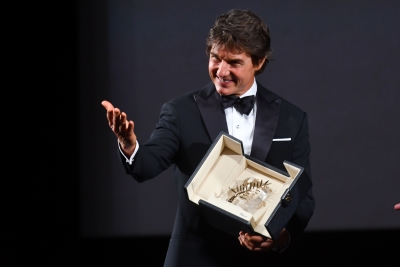 "We talked about it when filming. I just want to see everyone's faces. There are no masks and we're in a movie theatre. I'm going to take this all in and I feel very grateful. We're here for you. I make all these movies for all of you and I'm very blessed to do what I do. Enjoy this evening. You all have made my life." Reporting the event, 'Variety' noted that "the festival crowd joyously interacted with the film during the screening, cheering and gasping at stunts".

An overwhelming response came when Val Kilmer, who starred as Cruise nemesis Iceman in the original film, appeared in a scene with Cruise (as the commander of the U.S. Navy's Pacific fleet). The screening ended with a five-minute standing ovation from the crowd. 'Top Gun: Maverick' debuts in India on May 27, 2022.