When Sir Syed was to leave India forever Salim Shah as Sir Syed in the play "Wo Aaye Bazm Mein..."

Technology is known for breaking barriers and virtual reality is moving a notch up by bridging the gap between reel and real.

The same happened when a play, performed in the corner of a house in New Delhi, was viewed, reviewed and loved by audiences all over the globe.

The stage came to life when veteran actor Salim Shah donned the role of Sir Syed Ahmed Khan on Sunday.

The event organised by the AMU Alumni Association-Greater Chicago, was open through online registration for all.

It was one of a kind feature as, arguably, for the first time a live theatrical performance was watched all over the globe via Zoom platform.

Awaz-the Voice was present at the venue and was privileged to be a part of this reel-real phenomenon.

The corner of the living room of Dr.Alam’s house was occupied with two wooden pillars, a dining table serving as the study table, a lantern, a candle, and a lamp giving the three point lighting effect, a dslr connected to the laptop which was further logged in with Zoom, all arranged on two days short notice by the extended team of the director.

“My technical team directed the play through their knowledge and nuances of camera work and lighting…”, he said. 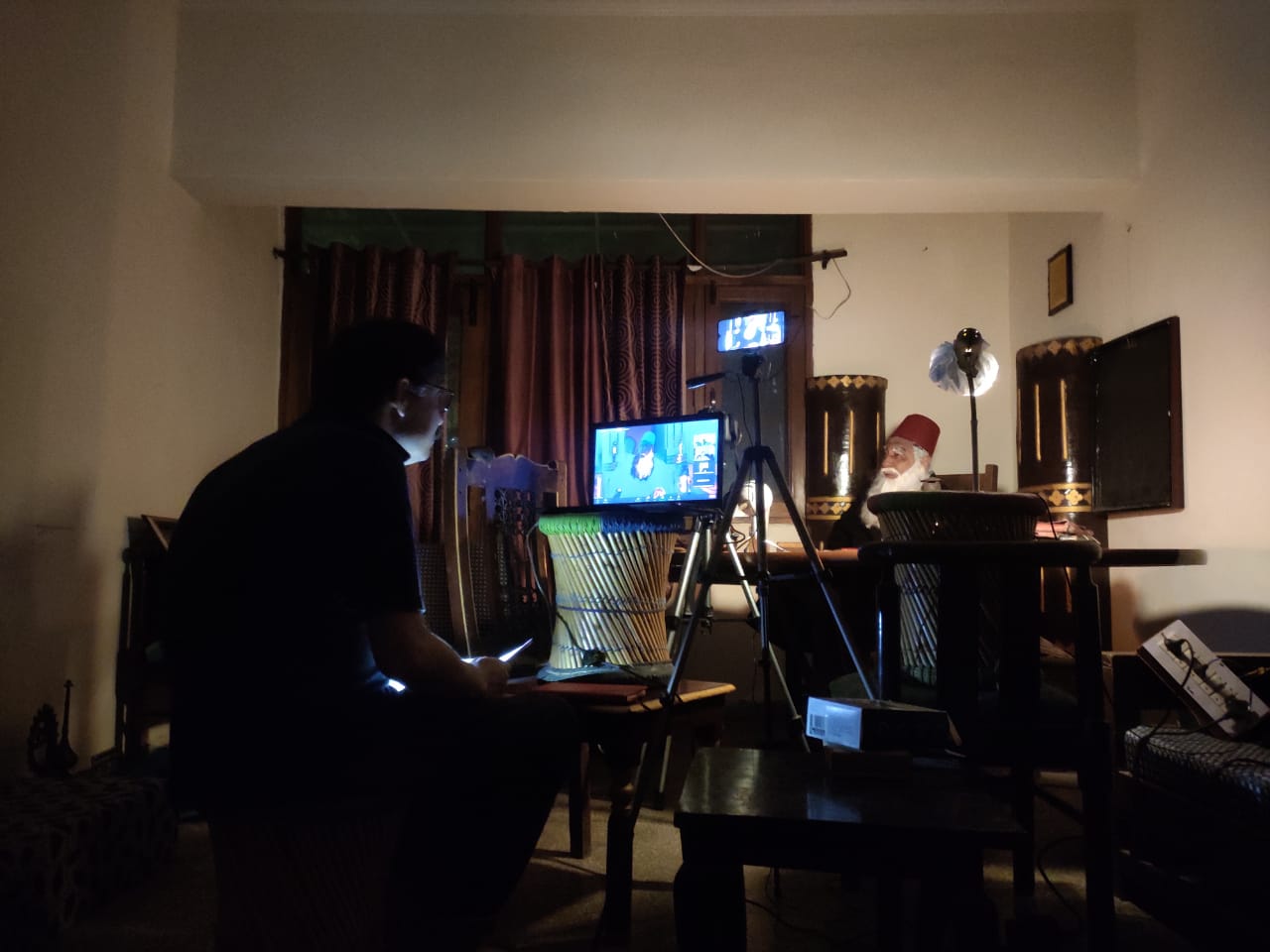 In Frame: Dr.Alam as the director and Saleem Shah as Sir Syed in Wo Aaye Bazm Mein

The next task was re-creating Sir Syed through makeup who was known for his heavy beard, bushy moustache, a Turkish coat and a quintessential Fez cap, all said and done, the makeup artists were to the point and results were astonishing.

On being asked about what inspired him to write about the iconic persona, Dr.Alam says that though a lot has been written about him but it hasn’t been portrayed either on screen or stage, “I wanted to be first of the very few to have portrayed Sir Syed. As per my knowledge only Shyam Benegal and Mohan Maharishi have so far portrayed him. I wanted to re-introduce Sir Syed to Aligs & Non-Aligs..”, he said.

It is quite notable that Alumni of AMU fondly call themselves Aligs, a suffix given to them by Sir Syed himself probably, the above play subtly mentions its etymology deeply connected with Oxford Alumni calling themselves Oxon.

Dr.Alam is an Alig himself and it was a tough project for him, “it was an uphill task penning down about somebody who himself has written a 6000 pages. To be honest, I read, re-read  pages of Hayat-e-Javed by Maulana Hali and several other works, then finally I was able to pen down a 12 pages long script which again had to be subtle yet connecting…” 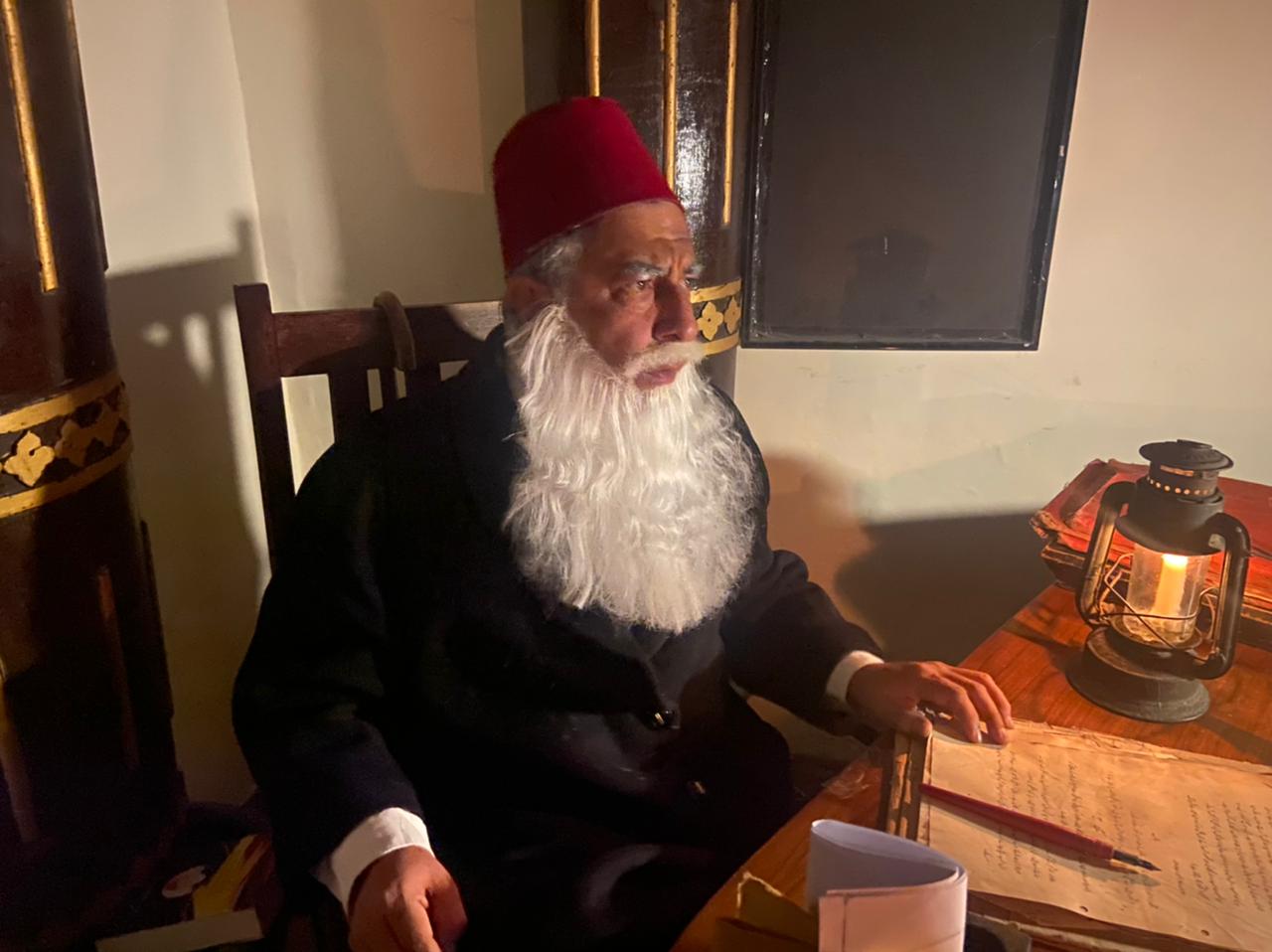 Saleem Shah as Sir Syed in Wo Aaye Bazm Mein

Actor Saleem Shah was Dr. Alam’s first choice, “he (Saleem Shah) was  my first choice as he is a good actor, his mother tongue is urdu and he himself is an Alig, thus it was a bit easy to share the concept of Sir Syed’s monologue with him..”, it is noteworthy that Mr. Saleem Shah served as the joint secretary of the AMU's Drama Club from 1982-1987.

The play is a monologue where the protagonist can be seen writing a letter on the dawn of 17th October 1895. Many lesser known facts about Sir Syed were revealed through this monologue of 30 minutes. For example, a line in AMU tarana (anthem) goes by:

Har sham hai shaam-e-Misr yahaṅ, har shab hai shab-e Shiraz yahaṅ which roughly translates as "every eve of AMU is like an evening of Egypt and every night is like the night of Shiraz (figuratively the most beautiful night)

Which is ironic as in the play itself during the monologue the character of Sir Syed says, “I wanted to leave India after 1857 and settle in Misr (now Egypt)..”

“AMU Tarana is written by Asrar-Ul- Haq Majaz who was a witty poet, he must have known about this incident..” Dr.Alam added.

When asked about any message for the upcoming writers and directors Dr.Alam says, “ Your content is the king no matter how non-technical you are, the content should be top notch…”