The 400-year-old Fatehpuri Masjid is in dire need of attention as plasted is peeling off from its walls and ceilings and the historic building located in the heritage zone of walled city of Delhi is in a dilapidated condition.

Many portions of the mosque - from floor to minaret - need urgent repair and restoration. The walls have become weak with no repairs or fortification being done ever and it could even cause accidents posing threat to human life.

The organizers have closed parts of the mosque that were in very bad state for humans. So far its eastern hall was showing signs of severe damage, but now parts of the arch in the original mosque are also started to fall.

Imam of Fatehpuri Masjid Maulana Mufti Mohammad Mukarram Ahmed told Awaz-the Voice, "If the falling building is not checked, this landmark may cease to exist. The ceilings of the rooms are dilapidated. The situation is pathetic. The whole building is dilapidated.”

The Fatehpuri mosque was built in 1645-50 was approved by Fatehpuri Begum, one of the wives of Mughal emperor Shah Jahan. The main prayer room, made of red sandstone, has a dome, with seven arched doors, connecting two large towers.

Mufti Mukarram says that the condition of the mosque is not fit for the human congregations. “If prayers are being offered in the mosque, it is due to the sentiment of locals.” He said the local influential people have made patchwork repairs of the historic monument from time to time and that is how it is standing. 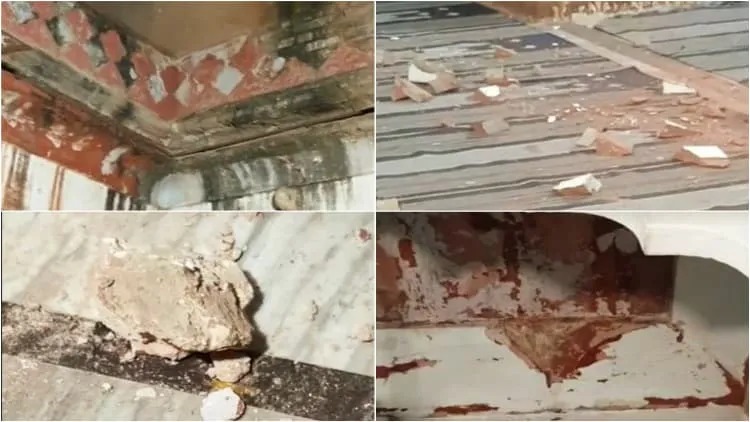 He said that Haji Mohammad Farooq of Ballimaran had laid marble in the mosque in 1972. Then there are names like Haji Feroz Belal, Haji Mohammad Saleem, Haji Sultan Bakhsh who played an important role in renovating the mosque. It is clear that this is a personal effort to keep the Fatehpuri Mosque safe till now.

Mufti Mukarram says that this mosque is the responsibility of the Delhi Waqf Board and it has not paid the salaries of the employees for 16 months. “Our aim is to get everyone's attention; whether it is the Central Government or the Delhi Government or the Waqf Board. The most important thing right now is to save the mosque.”

He said that Fatehpuri Masjid is under Delhi Waqf Board, but for the last 30 years he has been taking care of all the maintenance or repair work though the Board is getting revenue from the shops of Fatehpuri Masjid. He says ideally this revenue should be spent on the same mosque.

Maulana Mufti Mukarram said that we want anyone to come forward to repair it. “If we look at the condition of the mosque, you will understand how fast it’s collapsing.”

Regarding the dilapidated condition of the mosque, Maulana Mufti Mukarram said that it is not that all this happened overnight. The Waqf Board that has been guarding the mosque for a long time, has been reporting the situation to the government and even he has written about it to the concerned  authorities.

Union Minister for Minority Affairs Mukhtar Abbas Naqvi was also apprised of his plight. He didn't help either. However, many dignitaries, including the president, vice president and ministers, visit the mosque on this occasion. Yet no one is paying attention.

According to Maulana Mufti Mukarram, during the Manmohan Singh government in 2012, the government had allocated Rs 150 crore to the Swami Vivekananda Trust, out of which Rs 6 crore was spent by the Archaeological Department on the repair of Fatehpuri Mosque.

Archaeologist KK Mohammed also visited the mosque. Some work started and it suddenly came to a halt without anyone offering any reasons.

Mufti Mukarram says that the employees of the mosque have not received their salaries for the last 16 months. The Delhi Waqf Board, part of the Delhi government, is responsible for paying their salaries. The Kejriwal government paid salaries in its first term but not in the second term.

He says that these employees work without leave, have no leave and other benefits.