On 18 December 1845, Moti Mishra, a jamadar in the First Regiment of English East India Company at Patna, went to his officer Major Rowcroft to tell him that Munshi Peer Baksh of the same regiment was distributing money among Indian sepoys to revolt against the British rule. Major did not believe him at first and asked Moti and another sepoy to receive the money from Peer. Two days later Peer and Syed Ali, another nationalist, gave money to Moti, which was handed over to Major. The news was immediately sent to Calcutta (now Kolkata), the capital of British India.
Peer Baksh was arrested on 24 December and with this, a can of worms opened. The plan was wider than the British rulers had thought. The plan was later executed in another fashion during the summer of 1857.
The residence of Peer was thoroughly searched by Major Rowcroft where it was found that he was in regular correspondence with Rahat Ali of Sabzibagh in Patna. Rahat was immediately arrested. On further investigation, it came to light that a bookseller from Delhi frequently visited his home. A monetary award was declared for anyone who could give clues about ‘the plot’ or ‘the bookseller from Delhi’. The letters confiscated from Rahat and other evidence established that Khwaja Hasan Ali Khan of Patna who was in service of the Gwalior state was the mastermind behind this plan to start a widespread revolt in the British army. But, Khwaja could not be arrested. 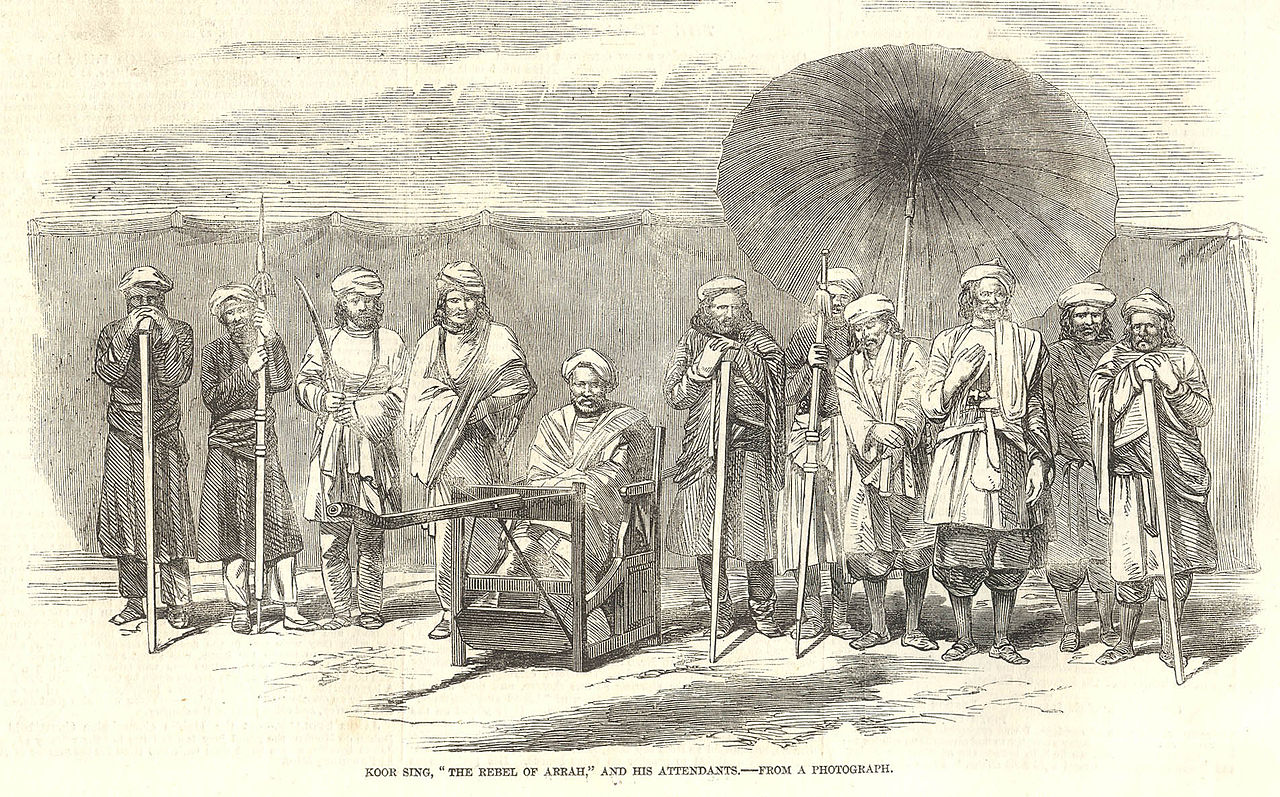 Kunwar Singh with his attendants - a sketch
The foreign rulers were alarmed. Their agencies soon discovered several letters from a well in the house of Malik Kadam Ali of Patna. These letters opened up a much larger plan. There were several letters from Kunwar Singh of Jagdishpur written to Khwaja Hasan Ali Khan, Malik Kadam Ali and other nationalists already under arrest. It was discovered that anti-colonial nationalists from Bihar, Hindus, and Muslims, held a meeting at Sonepur Fair. Several Rajas, Zamindars, and influential people attended this meeting at the tent of Khwaja Hasan Ali at the fair. It was decided that sepoys would be cajoled to revolt against the English rulers. Moreover, help from Raja of Nepal and Bahadur Shah Zafar would also be sought.

The investigations revealed that Saif Ali, who claimed to be a messenger of Bahadur Shah Zafar, was also present at the meeting. He provided the money to be distributed among the sepoys and to raise an army at Jagdishpur under Kunwar Singh. Kunwar Singh went to Nepal with arms and ammunition to ensure the support of Raja, at the time of ‘the war’. Raja promised his support. Kunwar also received enough money to raise a large army with at least three months' ration and salary. The plan was to attack Lahore, where the British forces were fighting a Sikh Army. Interestingly, the British could never find Saif and had to release Khwaja after the witness turned hostile. The higher authorities from Calcutta and London cautioned the Major not to arrest Kunwar Singh as it could have led an open rebellion at a time when the English forces were engaged in Punjab.
It is a well-known history that eleven years later Kunwar Singh led Hindus and Muslims of Bihar against the British. The British officials, during 1857, adopted a policy not to recruit ‘Rajputs, Brahmins and Muslims’ in the army as a result of their united war against the foreign rulers. Zulfiqar was the most loyal confidante and advisor of Kunwar Singh, who helped him plan the actions for 1857. In 1856, Kunwar Singh wrote to Zulfiqar that India needed sacrifice and with “your help we are without any worry”. In another letter, Zulfiqar was asked to move towards Delhi and advised that it would be better to die than be arrested. The secular nature of Kunwar Singh’s campaign can also be adjudged from the fact that after liberating Arrah he appointed a Muslim as the magistrate and another as revenue collector, both of whom were later hanged by the British army.
Today, it is important that when we remember Kunwar Singh and his fight against the British, his idea of a united India where Hindus and Muslims lived as a family should also be highlighted.