Matloob wants woodcarving to be part of syllabus 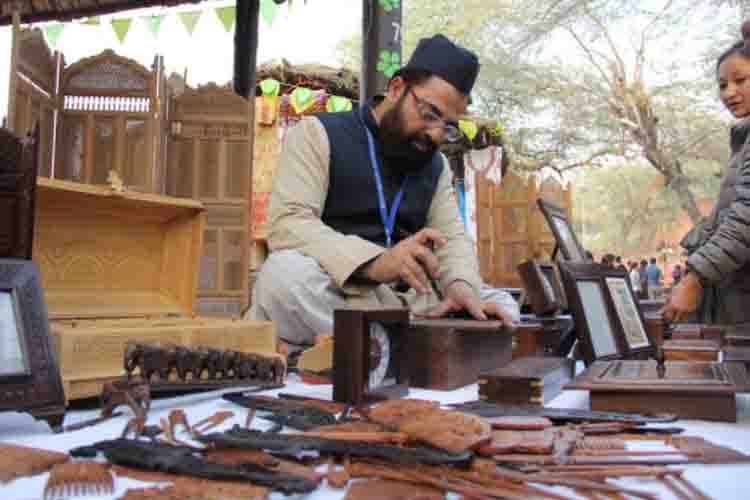 Mohammad Matloob the master woodcarving artisan
Rajesh / New Delhi
The art of wood carving often runs in the families like that of Mohammad Matloob, whose ancestors have played an important role in preserving the ancient heritage craft. His family has been involved in promoting, preserving, and boosting woodcarving for about a thousand years.
In lieu, Matloob displays several awards that he and his ancestors have received over some time.
Hailing from Nagina in Uttar Pradesh, Matloob’s family today lives in the Jama Masjid area of ​​Delhi. He explains that woodcraft art is an important part of India's culture. Although his ancestors were awarded by the Maharaja and Nawabs, it was in 1911 the British rulers invited his ancestor Abdul Khan to England and awarded him.
The Jalli (net) divider made by Mohammad Matloob
In 1965, Prime Minister Jawaharlal Nehru conferred the National Award on his grandfather Abdul Rashid; in 1984 the family's Bashir Ahmed and in 1985, Shabbir Ahmed received the National Awards from Presidents Giani Zail Singh. His Uncle (father’s elder brother) Abdul Rahman was given the National Award by President Fakhruddin Ali Ahmed in 1975.
Matloob decided to carry on this rich legacy by learning this art from his uncle Abdul Rahman.
He has received many prizes and awards so far. These include Delhi State Award in 2002, National Award conferred by President Pratibha Patil in 2005, UNESCO Excellence Award in 2006, Kalamani Award by Governor Jagannath Pahadia at Surajkund Handicrafts Mela in 2014, Kalaratna Award at Surajkund Mela-2015, in 2016 Shilpguru Award and was award conferred on him by the President in 2017.
Master Craftsman Mohammad Matloob
On the global level, Matloob is the recipient of the World Craft Council in Kuwait award in the year 2018. In the year 2012, a textile tableau was taken out in Delhi. In the tableau, he got a chance to showcase his art and was honored by the Delhi government.
Mohammad Matloob told Awaz-the Voice that in the art of woodcraft, carvings were done using ivory and Ebony wood since ancient times. Furniture, boxes, and various types of decorative items were made using these two things.
In 1988, the government banned the use of ivory. He uses sandalwood, rosewood, teakwood, and Ebony for carving. Again, as sandalwood is too expensive he stopped its usage. He used hardwood for his craft as these are easier to be worked on.
Master Craftsman Mohammad Matloob receiving an award
Matloob said at present, apart from furniture, he prepares partitions, models of houses, glass frames, photo frames, boxes, decorations, things, and many other types of items.
Mohammad Matloob feels the ancient arts like woodcarving should be included in the curriculum of schools. That way these ancient art forms will be preserved and it would also produce more artisans. Exposed to this art, on growing up the students would be able to appreciate this art.
Mohammad Matloob with one of his intricate works
Matloob rues that many ancient arts of the country are fast disappearing. It is very important to preserve the ancient heritage. Many efforts are needed to make everyone aware of these arts. Mohd Matloob says that he has been making artifacts to keep Wood Craft Kalan alive forever, as well as regularly training students of Art and Craft by visiting various schools and colleges in Delhi.