A scene from Ramlila
Rakesh Chaurasia/Faridabad

The refugees of Partition who came from the North West Frontier Province (since renamed as Khyber Pakhtunkhwa) of united India to the industrial hub of Faridabad in what is today, Haryana, in 1947 also brought their traditions along. The staging of Ramayana, the story of Lord Rama chose to live in exile in the jungle over becoming a King and fought a war with Ravana to get back his abducted wife Sita, in the Urdu language during the seven-day festival of Navratri was one such tradition.
The Urdu Ramlila of Faridabad has withstood the vagaries of time and with adaptations to the changing tastes of people, remains a unique annual stage show for the public.
Though initially the Ramlila’s was scripted in pure Urdu, due to the audience’s lack of understanding of the language its language was simplified over the years. The Urdu words that were hard on the ears of the audiences in this primarily industrial hub were converted into interesting poetic expressions that are still popular and are enjoyed by the audiences.
Ramlila is not only staged in India but many parts of the world. It’s staged in Indonesia in Bahasa language), then in Africa in the Afrikaans language. Ramlila is also staged in local languages in Malaysia, Singapore, Thailand, Vietnam, etc. 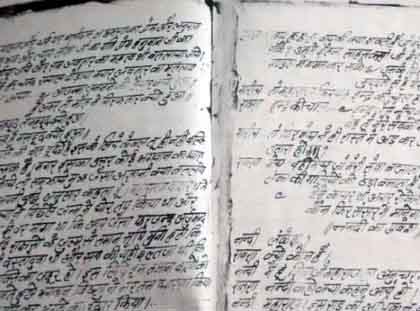 The fresh script of Ramlila in Devnagri
Ramayan was originally written by Maharishi Valmiki in Devvani Sanskrit. Gusain Tulsidas presented the epic as Shri Ram Charit Manas in a mix of dialects like Awadhi, Bhojpuri, Braj Bhasha, and Bundeli, etc.
However, the story and character of Lord Rama, who is the epitome of righteousness, is so alluring that it continued to be adapted and staged annually in all the regional and globally-spoken languages.
So, when the partition of India happened, millions of people from the North-West Frontier Province were uprooted and had to shift to India, they clung to their roots by staging the ‘Urdu Ramlila.’
Faridabad was once a major town of Ballabhgarh Tehsil in Haryana. It was India’s first Prime Minister Pandit Jawahar Lal Nehru who established a new town for the refugees of partition and also set up industries to create jobs for the settlers.
The people of the NWFP had left their land-property, house-shop, business, wealth, etc. and among the few valuable some could pick before leaving for a new land there was the script of the Urdu Ramayana.
Pandit Vishwabandhu Sharma, the architect of Urdu Ramlila, passed away on May 4, 2021, due to coronavirus infection. He had told Awaz-the voice that when their ancestors came here after partition, they had also brought the script of Urdu Ramlila with them. It was in the Arabic script that as they lived in areas of Kohat, Bannu, Dera Ismail Khan, and Dera Ghazi Khan (now in Pakistan) and spoke Urdu. However, when they came to Faridabad the locals spoke the Hindi language. Pandit Vishwababdgy Sharma, the architect of Urdu Ramlila
The second generation of the refugees picked up Hindi and the Urdu Ramlila was then written in Devanagari and not in Arabic script.
According to Pandit Vishwabandhu Sharma, despite the conversion from Arabic to Devanagari, the script of Urdu Ramlila did not change much. The script remained unchanged.
Urdu Ramlila in Faridabad continues to be organized by the Vijay Ramlila Committee and later it was also staged by the Shraddha Ramlila Committee of Sector 15.
There is also a funny incident related to the Urdu Ramlila. It was once the settlers told the then President of India and Faridabad Development Board President Babu Rajendra Prasad that they wanted to perform Ramlila as per their traditions. Rajendra Prasad gave them a donation of Rs 1000 in cash that helped in the staging of the first-ever Ramlila in Urdu.
Bharat Arora, former chairman of the Vijay Ramlila Committee told Awaz-The Voice that a lot has changed in Urdu Ramlila since that time. ”Many Hindi words have replaced the Urdu words that neither the audience nor the acts understand or can use easily; the language has become simpler.”
The actors of the Shraddha Ramlila Committee of Sector-15 Ramlila also use Urdu words in abundance in dialogues of characters.