A memento in Bhandari's Hyderabad home revives memories of '71 war As the country celebrates the Golden victory year to mark India’s success in liberating Bangladesh from Pakistan in 1971 by taking ‘Swarnim Vijay Mashal’ (Golden victory torch) lit by Prime Minister Narendra Modi, a memento from the war - the fired shell that was the first one to be fired by the 162 Field Regiment of the Indian Army on the Pakistani positions – is the center of attraction in the home of the then commanding officer Lt Col AK Bhandari.

Lt Col Bhandari has passed away his son Kush Bhandari narrates the story of this extraordinary showpiece in his drawing-room. Lt Col Bhandari had asked his men to preserve the shell as a memento. His tag line to motivate his men was “Jeet Ki nishani hai sambhal ke Rakna wapas le kar Jayenge!” (The symbol of victory must be preserved for carrying it back home). Every man and officer under his command believed in these words due to the rigorous training they are imparted for joining the Army, said Kush Bhandari, a businessman. 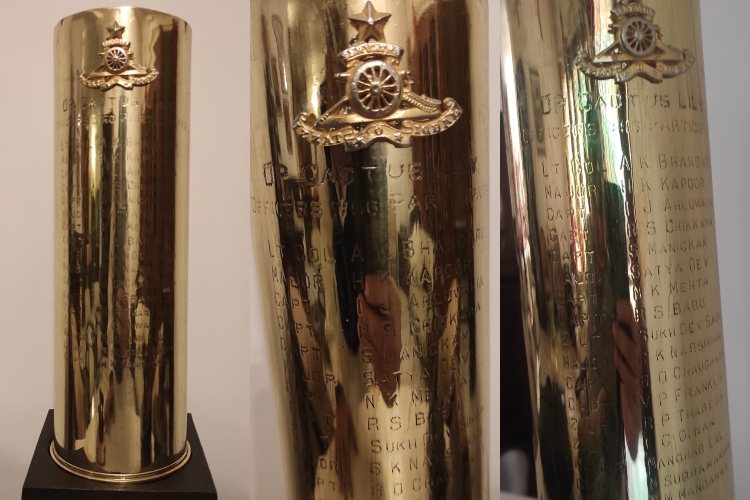 The 1971 War for the Liberation of Bangladesh (Operation Cactus Lily) is a landmark in the annals of military history as it changed the map of the Indian subcontinent and saw the birth of a new Nation-State of Bangladesh.

In Just 14 days the Indian Army cut through Dhaka the capital of erstwhile East Pakistan. Pakistan surrendered with more than 93,000 personnel of the Pakistan Armed Forces, who were taken as Prisoners of war (POWs).

The Indo Pak war of 1971, was the first full-scale joint services operation of the Indian Military since India’s independence and witnessed the largest military surrender since World War ll under the watchful gaze of Lieutenant General JS Aurora on December 16, 1971, when Lieutenant General Niazi signed the Instrument of Surrender. What would have transpired in the minds of Pakistanis soldiers is anybody’s guess while every citizen in India was proud of their Military. 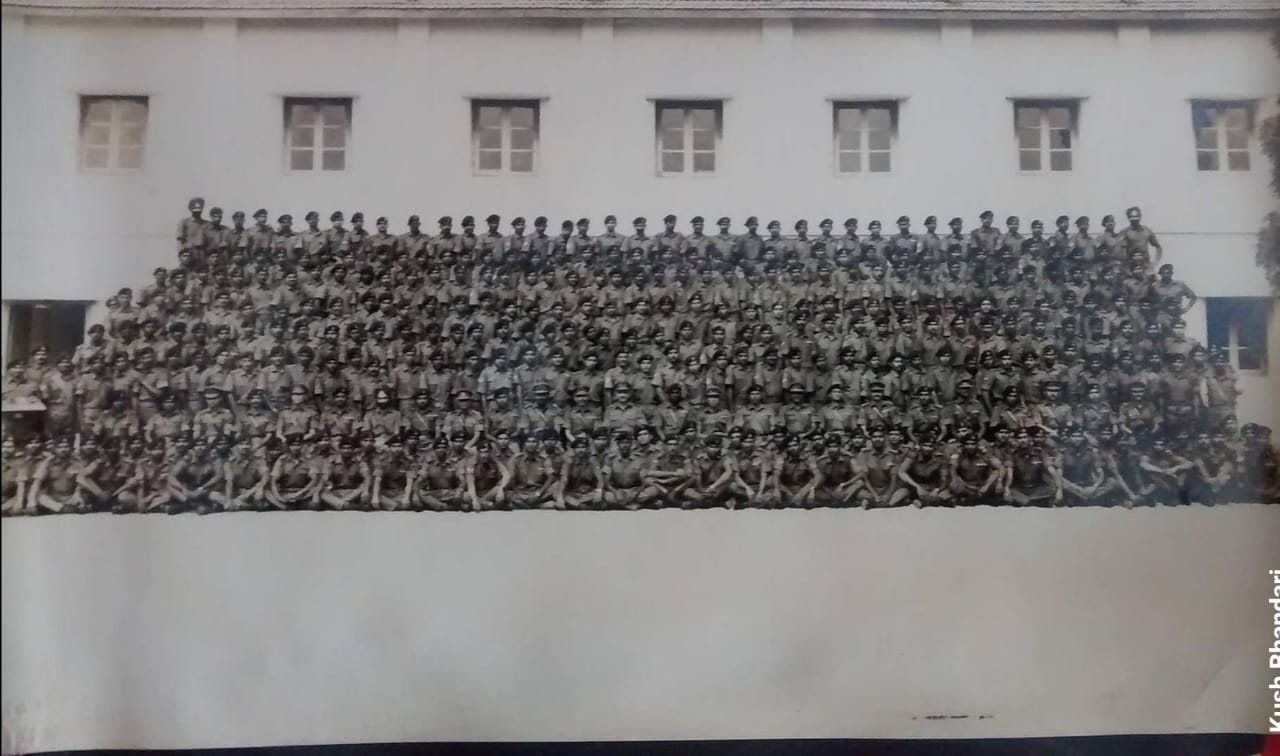 Group photo of the regiment

The war had not only liberated East Pakistan but defeated the Pakistan Army and its geopolitical geostrategic heart Dacca was captured by the Indian soldiers. Pakistan lost half its country, its forces in the East and had to surrender to India.

There were many important battles fought during this war and the 54 Infantry Division of which Lt Col Bhandari-led 162 field regiment was part of also won one.

Lt Col AK Bhandari had the honour and privilege to take his Regiment for the field. During a route march in preparation for the run-up to the war, he got drenched in rain and was in the Military Hospital Secunderabad, Telangana, recovering from pneumonia when the orders of movement for the war were issued to the Arty Brigade.

Lt Col AK Bhandari despite being hospitalized said “How can my boys go without me!” He gave a personal undertaking for getting discharged from the hospital and insisted he had to lead from the front. He could not even think of his men, who were like his children, going into the battlefield whilst he stayed behind. Hyderabad too like other cities played a major supportive role in the war. The railways' staff worked day and night as the trains were being loaded with all the war equipment. Finally, it was the time for departure; emotions ran high through the families who had come to see off their loved ones going to war.


The 162 Field Regiment fought a key battle in the Indo-Pak War in the Western sector. Lt Col AK Bhandari fired the first shell which was brought back after victory and kept in the regiment museum and later gifted to him.

The period from 4 December 1971 to 16 December 1971 saw some testing moments for Bhandari’s men. Some Indian soldiers were stuck in minefields, vehicles blown up by mines planted by the enemy and there was intense shelling. It was a matter of pride that Bhandari’s regiment did not suffer any casualties.

His son remembers his father telling him how Capt R S Babu came running out of his bunker to congratulate his father on the successful end of the war on December 16. Lt Col Bhandari chided him for this indiscretion and asked him to go back to his bunker as sporadic shelling was continuing despite the ceasefire and surrender by the Pakistani forces in Dhaka.No sooner did a splinter from a shelling hit Capt Babu and that ended his life. Capt Babu was the only man martyred in the 162 Field regiment in the war.


The shell fired by this regiment as the first maneuver of the war today adorns the drawing-room of Kush Bhandari’s home. It has the names of all the men of this great Artillery regiment who were a part of the 91 Infantry Brigade in the said battle. 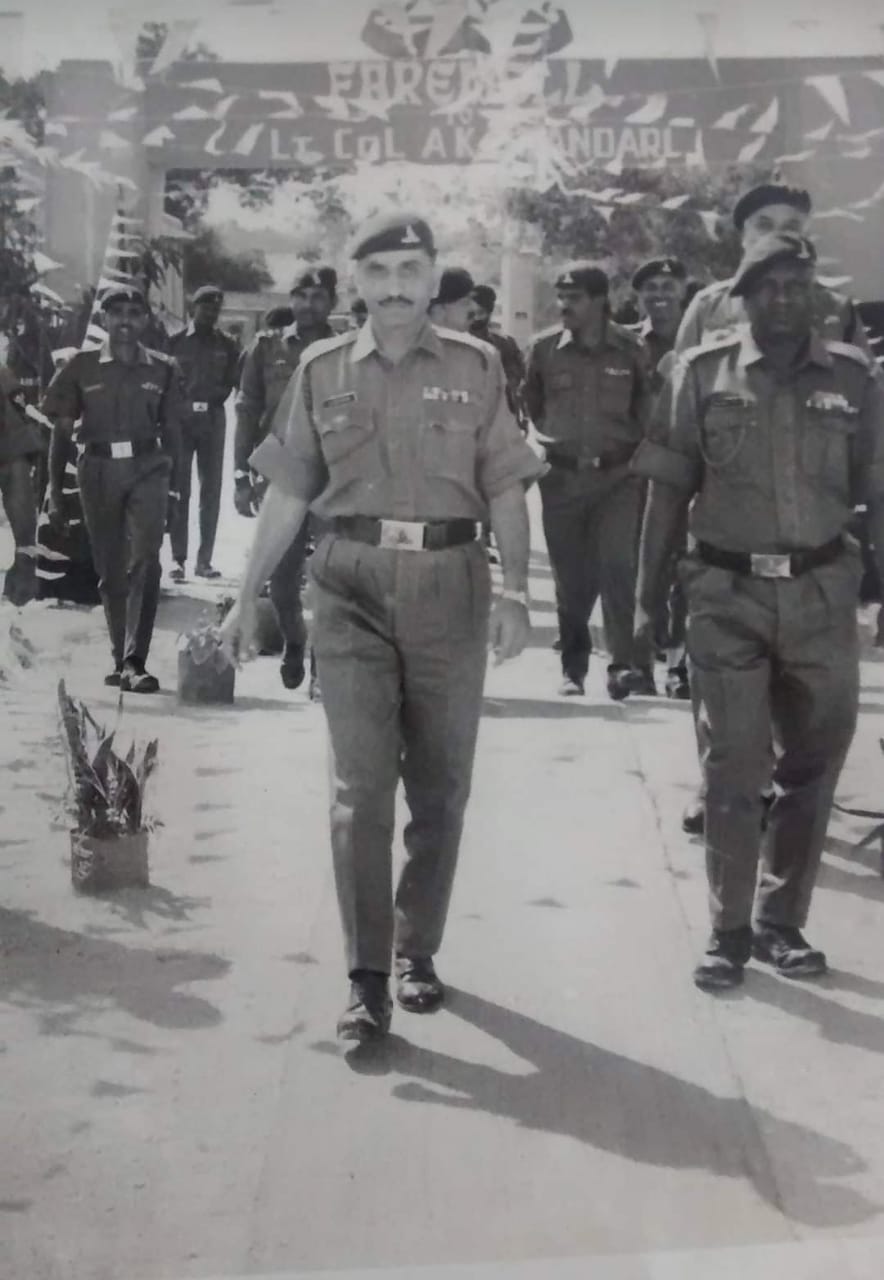 For a Proud son what more than preserving his father’s memento that reminds him and the nation of the glory of the Indian armed forces.