An eulogy by Pakistani poet Rais Amrohvi to Gandhi (Don’t look at how he lived

Consider what has he become after death

Have transformed into a magical chemical formula)

Gandhi on 30 January 1948. Rais, a resident of Amroha in Uttar Pradesh, had to migrate to Pakistan a few weeks before Gandhi’s assassination. His writings reflect his pain of the partition. In 1948, writing about the divisive politics of Jinnah he wrote;

(Look at the glorious cure by the leaders of Muslim League

10 crore people have been made sacrificial lambs)

It is no surprise that Rais was assassinated by the guardians of ‘Islam’. For obvious reasons these quatrains in praise of Gandhi were never published in Pakistan, but he recited these in public interviews. He recalled that during the partition he was in Delhi. Politicians had turned Indians against Indians in the name of religion. Delhi was witnessing violent attacks on Muslims as news of attacks on Hindus came from West Punjab. In those times, Gandhi was their only hope.

When Gandhi came to Delhi in September 1947, people felt that violence would stop. The violence stopped to a large extent, which infuriated the fanatics. Rais said that Gandhi was killed by a fanatic, Nathuram Godse, for the reason that he tried to stop the violence. He felt shattered as the last hope to bring the people of India and Pakistan closer was dead. A devastated Rais wrote several quatrains on this tragedy. He wrote;

(Oh! Gandhi has been martyred by a Hindu

This death is known as the glory of life

India’s liberation is a miracle of a short-heighted man

Gandhi was an incarnation of Gautam and Gita) 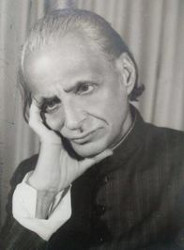 Rais believed that Gandhi was an ideal man and stood for everything a true human should. In his view, religious faith was secondary to truth and Gandhi proved himself to be a better human than most of Muslims. It was an indirect attack on Jinnah. He wrote;

(Not only India, he was the pride of Asia

Wearing a loincloth he was more glorious than the kings

He was the personification of fidelity, conviction, sacrifice, and courage

Though a Hindu he was better than lakhs of Muslims)

Rais further reasoned with the fanatics of all hues not to look down upon Gandhi. In his words;

(His head kissed the sky

And, feet were grounded

Don’t look at Gandhi with contempt

This small man was bigger than Himalaya)

In his view, Gandhi’s philosophy would decide the future of India and even after death, his ideals will take the form of a national ideology. Rais wrote;

(Plans and advice of Gandhi

Will become future of India

Today he has become a handful of ashes

These ashes will become a seed)

(Even if Gandhi has died

His memories are path and its guide)

Rais paid his tribute by crediting Gandhi with independence.

(English were amazed at every call made by Gandhiji

He never ran from the battlefield, no matter how many were the enemies

Only a righteous person can be expected of which

He welcomed the death with such a glory)

The grief in the poetry of Rais is evidence of the love Gandhi commanded from people of different religions, ethnicities, and nationalities. The belief of Rais that Gandhi could unite Hindus and Muslims again shows what kind of confidence he could generate among the Indians.