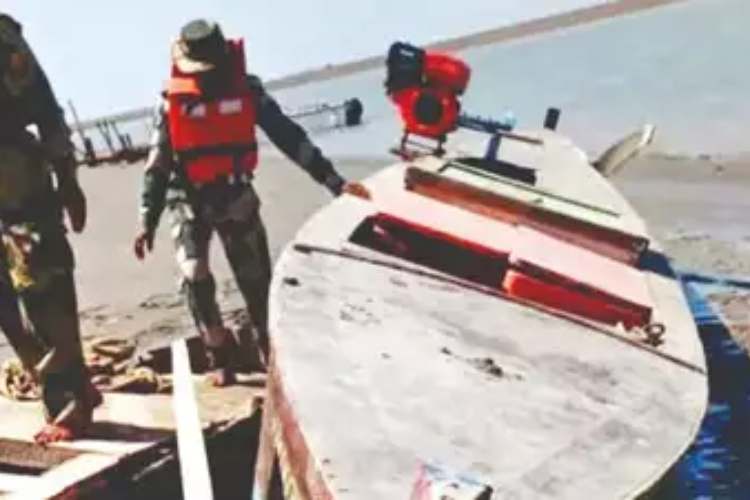 File image of a Pakistani boat seized in April 2022

The Border Security Force (BSF) on Monday seized one abandoned Pakistani fishing boat from 'Harami Nala' creek area near Bhuj in Kutch of Gujarat, along the India-Pakistan maritime boundary.

The boat was found from 'Harami Nala' around 6 am by BSF personnel who were patrolling in the area.

Some ice boxes, jerry cans and fishing nets were seized by the BSF personnel. However, the men on the boat managed to flee towards the Pakistan side.

"We seized a Pakistani fishing boat from 'Harami Nala' in Kutch of Gujarat around 6 am. A few people were seen on the boat, but they jumped into the water and swam towards the Pakistan side. Icebox, jerry can and fishing net have been seized by the BSF personnel from the abandoned boat," a BSF official told mediapersons.

The 'Harami Nala' is also known as the Sir Creek area. The area is a 22 km long and approximately 8 km wide marshy patch that is navigable most of the time.

Earlier in June this year, the BSF had seized three Pakistani boats from the area.

In May too, the BSF apprehended over nine Pakistani fishermen and seized a similar number of Pakistani fishing boats in different operations.