Ramayana train between Delhi, Nepal to chug on June 21 IRCTC will be India's first agency to connect two countries through tourist train under the Bharat Gaurav Scheme of Indian Railways as the train will depart on the Shri Ramayana Yatra Circuit from New Delhi on June 21, according to an official statement by the Indian Railway Catering and Tourism Corporation (IRCTC).

The train, originating from Safdarjung railway station, will cover the distance of approximately 8,000 kilometres between India and Nepal on the Shri Ramayana Yatra Circuit. This train will run on the Ramayana Circuit identified under the "Swadesh Darshan" scheme covering prominent places associated with the life of Lord Shri Rama.

A visit to Ram Janaki temple in Janakpur located in Nepal by train will be part of this tour itinerary, the first time in its history. According to IRCTC, the train with a capacity of 600 persons, will cover major cities including Ayodhya, Buxar, Janakpur, Sitamarhi, Kashi, Prayag, Chitrakoot, Nasik, Hampi, Rameshwaram, Kanchipuram and Bhadrachalam. Bharat Gaurav Tourist Train is the Union government's initiative "Dekho Apna Desh" to promote domestic tourism. 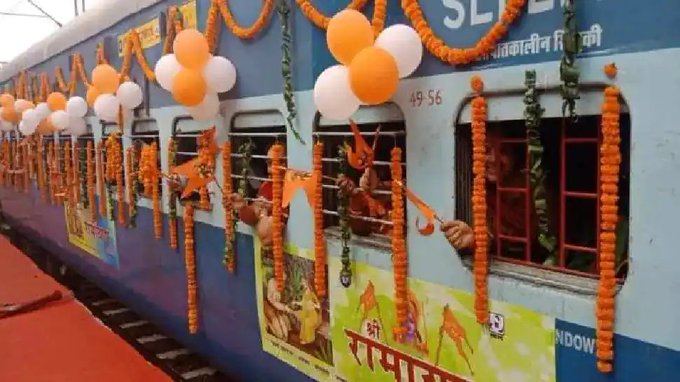 The proposed Bharat Gaurav Tourist train tour has its first stop at Ayodhya, the birthplace of Lord Rama, where tourists will visit Shri Ram Janmbhumi temple and Hanuman temple and additionally Bharat Mandir at Nandigram. Besides this, IRCTC will also provide a safety kit to all tourists containing a face mask, hand gloves and hand sanitiser.

The journey will cost around Rs 65,000 per person. It will cover the states including Uttar Pradesh, Bihar, Madhya Pradesh, Maharashtra, Karnataka, Tamilnadu, Andhra Pradesh and Telangana.