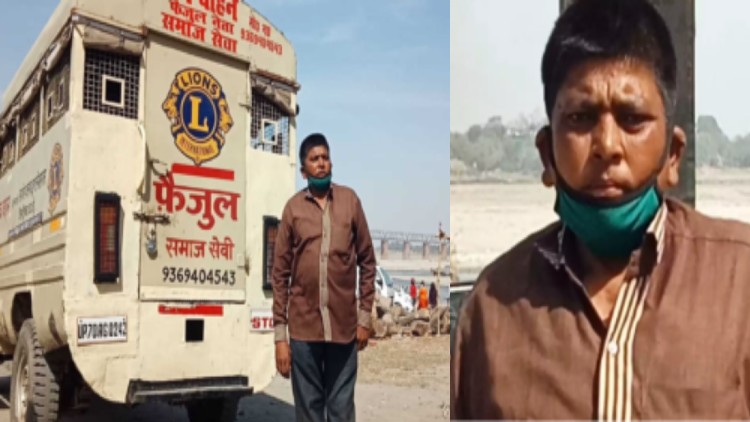 In a situation where family members are shying away from helping others and performing the last rites of the Covid victims, Faizul of Prayagraj (Allahabad) in Uttar Pradesh is using his vehicle to help fellow humans in all ways.

He not only offers his personal vehicle - converted into an ambulance-cum-hearse van to the poor and the needy for carrying the patients to and from the hospital but also the bodies of those who die of Covid. At times, he has also taken the unclaimed and abandoned bodies to the burial and cremation grounds and performed their last rites.

As soon as he receives a call on his mobile phone, he drives to the destination. He has no charges for his services and accepts if and as much people want to give. He uses this money to meet his expenses and maintenance of his vehicle.

People like Faizul are seen as a Messiah in the times when commercial agencies and private operators are overcharging for every service to the people living in agony of either Covid infection or the death of a dear one.

Faizul is a practising Muslim; he prays and keeps fast during the holy month of Ramazan. However, this year he is unable to keep the fast as he has equally important responsibility to perform on the path of Allah – save humans and give dignity to the dead.

Faizul said he has sought Allah’s forgiveness for not keeping the fast because he needs to remain fit to help others and be available round-the-clock.

He is so involved in giving farewell to the dead that he has not even found a life partner for himself so far. He prefers not to get involved in worldly affairs and remain on the track of his chosen path.

Faizul started with taking unclaimed and unwanted bodies on a trolley from one place to another. However later with donations from some individuals and institutions he bought a van. His work gets him appreciation and respect from everyone. People praise him for remaining selfless during the most difficult period of the pandemic.