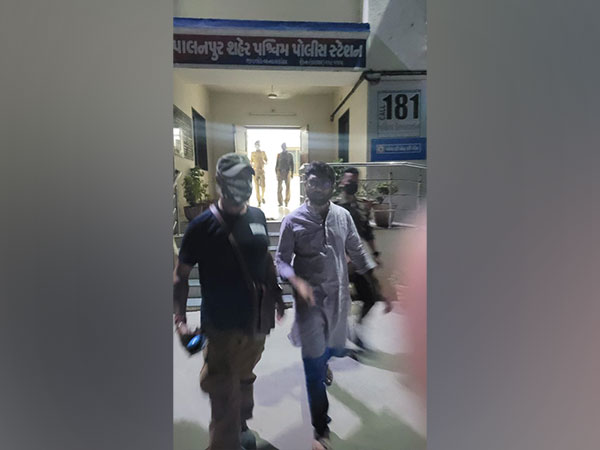 Jignesh Mevani after his arrest.

The Assam Police have claimed that the primary offence for which Gujarat MLA Jignesh Mevani was arrested was hurting the "sentiments of a particular community" in his tweets.

"Primary offence committed by Jignesh Mevani under IPC 295(a) is insulting the sentiments of religion, through his tweets wherein he equated Nathuram Godse to Devata (God)," police sources said.

Nathuram Godse was the assassin of Mahatma Gandhi.

The Assam police arrested Mevani from Gujarat's Vadgam on Wednesday night, reportedly over a couple of his tweets.

A police team from Assam took Mevani into custody at Palanpur Circuit House in Banaskantha around 11:30 pm on Wednesday night, according to Mevani's team.

"Police are yet to share the FIR copy with us. Prima facie, we have been informed about some cases filed against him in Assam," his aides had said at the time of his arrest.

Later, the Kokrajhar police in Assam confirmed the arrest of the Gujarat MLA.

A case was lodged against Mevani under sections 120B (criminal conspiracy), section 153(A) (promoting enmity between two communities), 295(A), 504 (intentional insult with intent to provoke breach of peace), and sections of the IT Act.

A couple of tweets on Mevani's Twitter handle are not visible on his timeline with a message displaying that the tweets have been withheld in India based on a "legal demand".

"This Tweet from @jigneshmevani80 has been withheld in India in response to a legal demand," reads the message on the Vadgam MLA's Twitter.

Mevani was taken from Gujarat to Assam's Guwahati by the police.
Elected as an independent MLA, Mevani had extended his support to Congress in September 2019.