“I am not in the habit of begging, I have never begged. I have no intention of begging now.” This was the reply given, on 24 May, 1971, to the Members of Parliament (MPs) who wanted Prime Minister Indira Gandhi to seek intervention of ‘superpowers’ in the refugee crisis caused by the genocide of Bengali population by the Pakistan Army.

Like a game of cricket, a national war is an act of collective efforts but like a captain, in this case the role of the national leader becomes important. A leader has to lead by example and courage while taking important decisions in consultation with his team. In this war, Indira Gandhi stood up in a fashion only a great leader can. The greatest testimonial of the importance of her leadership comes from none other than Lt. Gen. A.A.Khan Niazi, who surrendered in front of the Indian Army on 16 December, 1971. While blaming his political leadership for the defeat of Pakistan, he writes, “the Indian Government, led by Indira, does not throw in its troops haphazardly without proper planning, and never resorts to open hostilities unless they are one hundred percent sure of success.”

Of many lessons, the most important one taught by the war was the importance of decision making by political leadership in the times of crisis. After the Pakistan Army started an organized massacre of Bengali population on 26 March, 1971, it did not take Indira more than a week to move a resolution in Lok Sabha declaring full support to the cause of Bengali people in East Pakistan. Within a month, she asked Army Chief S.H.F.J Manekshaw to launch a military offensive in East Pakistan. When Manekshaw told her that time was not ripe for a military action and his troops needed time to prepare, Indira, like a true leader of a nation, accepted the assessment of an Army General. Indira gandhi with the family of Sheikh Mujibur Rehman

The very fact that she could listen to and follow the arguments presented by professionals shows the maturity of Indira Gandhi as a leader. The refugees from Bengal were pouring in. After surveying the border, Indira addressed the Parliament on 24 May. She reported that at least 335 refugee camps near the border to East Pakistan were serving millions of people.

The crisis was humanitarian as well as related to internal security for India. While on one hand India, as a democratic nation, was committed to the safety of defenceless Bengali people, on the other far-left Naxalites wanted to exploit the refugee crisis to challenge the democratically elected Indian government. Since the late 1960s, West Bengal had become a hotbed of militant communist Naxalites. The intelligence reported that the Naxalites were looking at an opportunity of exploiting millions of people in the camps to raid Kolkata. Gita Mehta in an interview to Pupul Jaykar said that the Naxalites were assaulting people who were distributing food and other amenities to the refugees. “The intention appeared to be to force the ten million people to march on Calcutta. The Naxalites thought that the historical moment was right it could be the beginning of the Long March. If Calcutta had to absorb ten million starving people, it would have unleashed an explosion.” India needed a solution but the USA and China were supporting Pakistan.

Indira Gandhi ordered the Indian Army, administrative services and other arms of the government to form a provisional government of Bangladesh and train its militia, Mukti Bahini, for the guerilla war against the Pakistan Army. On the other hand, Yahya Khan backed by the US, ordered the execution of Mujib in August. Indira addressed a public rally at India Gate, New Delhi, on 9 August and thundered, “We are a nation of poor, illiterate people, but we shall show the world that no power on earth can intimidate or subdue this country.” She asked for the public support and Indians never let her down.

The President of the USA, Richard Nixon, reacted by announcing a USA-China pact, thus threatening the integrity of India by forming a USA - China - Pakistan triangle. Under the threat of the USA, Indira swiftly contacted the USSR and signed a Indo - Soviet treaty for Peace and Friendship. A direct challenge to the USA and China was thrown. If this was not enough Indira travelled several countries including the USA and USSR, to form a public opinion against the atrocities being carried out by Pakistan.

The western powers, especially the USA, wanted India to stop supporting the Mukti Bahini. They proposed a UN intervention. In one interview with Indira, during her European visit, Michael Charleston of the BBC asked her why she was not accepting ‘the proposal for posting UN observers on both sides of the border, to defuse the situation’. Indira replied in an angry tone, “does your question mean that we allow massacres to continue? Do you support genocide? Does your question mean that? There has been the worst possible violence. When Hitler was on the rampage, did you keep quiet—let Jews die?” In early December, during her visit to the USA, Indira confronted President Nixon on the question of Bangladesh. She could not be unnerved through any tactic of intimidation.

On 3 December, Pakistani Air Force struck at several targets in India. She was in Kolkata. Displaying no sign of panic, Indira addressed a public gathering and met intellectuals before flying back to New Delhi the same night. The army advised her not to travel, as the Pakistan Air Force could attack her plane. Later she disclosed to her secretary that she was not sure if her flight would reach New Delhi. Army was ordered to march into East Pakistan, opposition political leaders were briefed of the decision personally by her and at midnight she addressed the nation through radio about the declaration of war.

During the course of the war Manekshaw briefed her of a debacle at one front. Without any shade of anxiety on her face she told him, “But, Sam you can’t win everyday.’ Manekshaw recalled later how her courage was an inspiration for a seasoned army officer like himself. After this crisis was resolved and India regained the losses, Indira told Manekshaw she was really nervous after hearing the news of reverses. 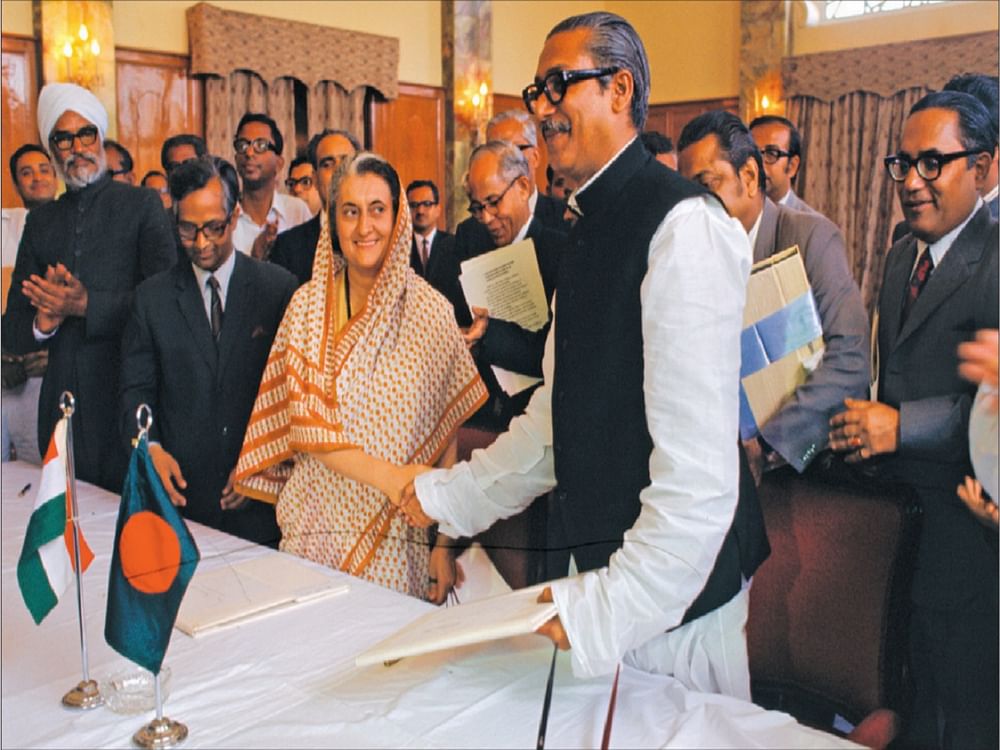 On 6 December, she declared recognition of independence of Bangladesh in the Parliament. The USA was nervous; it started moving its naval fleet towards the Indian Ocean. The Indian Army was asked to ensure capture of Dhaka before the fleet could reach Bay of Bengal. Indira went back to her strength, i.e. the people of India. Against the advice of intelligence and the army, she called a public meeting at Ram Lila ground, New Delhi. Indian Air Force guarded the skies to check any airstrike at the ground. Indira roared, “we will not retreat. Not by a single step will we move back”. According to Pupul Jayakar, “the country rallied behind Indira Gandhi. A great anger against the United States swept the nation. Not since the freedom struggle had such strength been demonstrated. The President of the United States and his advisers were taken by surprise; they had not expected this response.”

The Indian Army made the enemy surrender before the naval fleet could reach. On 16 December, 1971, at 5:30 pm, Indira came into the parliament to brief about the surrender that had happened an hour ago in Dhaka. She said; “My Speaker, Sir, I have an announcement to make, which I think the House has been waiting for, for some time. The West Pakistan forces have unconditionally surrendered in Bangladesh. The instrument of surrender was signed by Lt. Gen. A.A.K. Niazi on behalf of the Pakistan Eastern Command. Lt. Gen. Jagjit Singh Aurora, GOC-in-C of the Indian and Bangladesh forces in the Eastern Theatre accepted the surrender. Dhaka is now the free capital of a free country.”

She declared a ceasefire on West Pakistan with a view that a prolonged war would attract intervention of international powers, which would not be good for the future of the country. On 17 December, she told the parliament, “as the Gita says, neither joy nor sorrow should tilt the balance of our equanimity or blur our vision of the future”, before declaring that army operations in West Pakistan would be ceased.

Years later, in an interview Jonathan Power of the Washington Post asked Indira what was the source of strength which helped her during the war. Indira replied, “One is the Hindu philosophy, and two is a deep commitment. I was brought up from babyhood in an atmosphere which was deeply committed to raising India, not just to win its political freedom but raising it as a nation in every way.”  Power further asked about the secret of her energies and character with which she stood against President Nixon during the war, to extract a typical Indira reply.

She answered; “You know there was that Peter Sellers film, "The Party"? Well, in that, Peter Sellers was an Indian. He was always putting his foot in it, extremely foolish but very lovable. It's all about film people. The director is saying to this poor girl, "If you go to bed with me I'll give you the part." Peter Sellers barges in the middle of all this. The director grabs hold of him and says, "Who do you think you are?" Sellers replies: "Indians don't think. We know who we are."