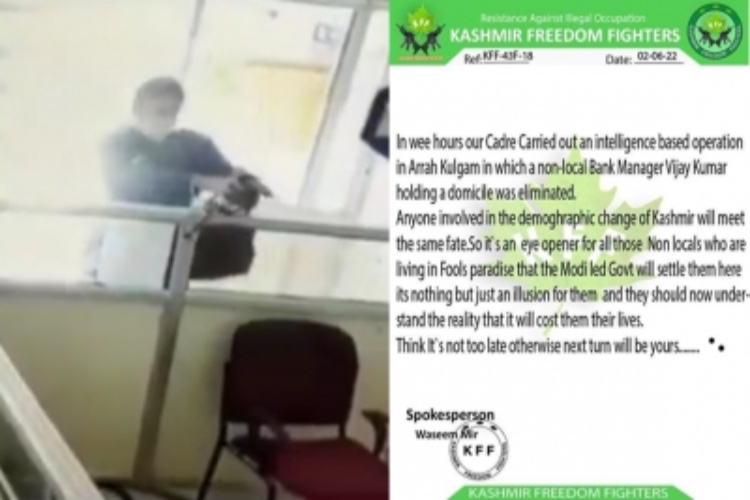 With targeted killings on the rise in the Kashmir Valley, the spectre of the 'invisible enemy' or TRF (The Resistance Front) has become the new threat percept for the security forces.

The local populace happy with an abundance of tourists this year says that dissent has to find ventilation and this group is the manifestation of residual IS ideology indoctrinated in the dissident youth by Lashkar elements. While TRF doesn't ostensibly pursue Islamic ideology, its modus operandi is targeting non-Muslims to create a fear psychosis and panic amongst the people.

The message is to non-believers and the administration that it wants to target Kashmiri Pandits and Hindus who are working in the Valley or have settled in the area. This messaging is both subliminal and direct. The biggest fear driving the TRF is the possibility of elections, either later this year or next year.

The resumption of the political process is viewed as a threat. More so by the masters of the TRF - ISI S Wing - which relentlessly pursues its dark agenda of destabilising Kashmir and India. What it is doing is funneling a low cost, high profile proxy war and while its role has been exposed repeatedly by the Government of India, the killings are getting more and more dark and dangerous. The attack is perceptually on India. The modus operandi is malleable and ductile.

ISI's dreaded S Wing's diabolical agenda is driven by the recent permanent ceasefire with TTP in the western theatre. General Kayani had once famously said that if Pakistan has strategic depth on its western border, then it could focus its tactics and resources on its eastern flank which is Kashmir.

This is actually playing out today as the size and scope of these killings is being ratcheted up. The only deterrent is the problems with the wraith of FATF, but even that is not holding back the S Wing as it ramps up the fear factor. In the pursuit of the Great Game, Pakistan's greatest advantage remains that despite political turmoil in the land, the permanent deep state combination of the Army and ISI, everything else is overriden. In such a scenario, the jehadi supporting the S Wing is free to do what it wants.

Desperate after minor blips in the Valley in spite of revocation of Article 370, which jump-started the integration process with the rest of India by giving the ownership rights to people from the rest of the country and the recent non event of Yasin Malik's sentencing, ISI through the rogue Lashkar elements has upped the ante in the Valley using the TRF. By creating a sense of insecurity through a weaponised response, it has raised the phantom of TRF to act as a scare monger. While its hierarchy lies in Pakistan, the killing graph is worrisome.

New stratagems and tactics are being used by the ISI masters and TRF youth. For instance, chits are sent to the houses of the killers which give an address of a bus stand in Jammu from where they are driven on a nondescript two-wheeler to a location where a handgun and a photograph is provided in a grim reminder of old style Bombay supari killings. The youth then returns to the Valley and kills the designated target and goes back to living his life.

Another system is infils through the Jammu side LoC nullahs where the small arms consignment is picked up and taken to Srinagar. The Rendezvous Points have been created with such cut offs that the chain is difficult to break. Equally, 25 kg drones with an equivalent sized package are also being used to drop small arms, sticky bombs and grenade packs in the Jammu sector, which are picked up and transported back to the Valley surreptitiously. Sources close to the developments have also revealed that recently a drone was found in the Jammu sector with Indian markings.

Perhaps given the trendline of killings, the best way forward is to use a local police intel based approach rather than one which is driven by an operation and tactical reach. Even as this new invisible enemy targets non-Muslims to spread fear, ISI continues to push in Hizbul and Jaish terrorists from different points on the LoC as a diversionary tactic, but these are being subdued by the Indian Army in regular encounters in the Kashmir Valley.

Pakistan's Janus faced style of operations in the Valley is not new, but this time round it is being thrown into stark relief due to the extension of the ceasefire with the Pakistan Taliban beyond May 30. The three-month extension with Islamabad brokered by Kabul is acting as a catalyst on the eastern front which is basically the Kashmir Valley for the Fauj and its subsidiary ISI. The TTP has waged an armed rebellion in Pakistan for the last 14 years, fighting for a stringent enforcement of Islamic laws.