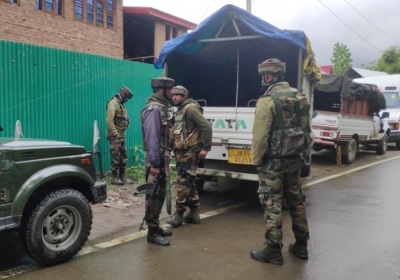 Two terrorists, including Pakistani terrorist commander Haider, were neutralised in an encounter with security forces in Jammu and Kashmir's Kulgam district on Sunday, police said.

Police said acting on specific information generated by police regarding the presence of terrorists in Cheyan Devsar area of Kulgam, police and army launched a joint cordon and search operation.

In the ensuing encounter, two terrorists of proscribed terror outfit LeT, including Haider, were killed and their bodies were retrieved from the site of encounter. The other killed terrorist has been identified as Shahbaz Shah of Kulgam. As per police records, Haider was a categorised terrorist who was active for more than two years in north Kashmir and had recently shifted his base to south Kashmir.

"The killed terrorist was part of groups involved in several terror crimes, civilian atrocities and various killings including recent killings of police personnel SgCT Mohammad Sultan and Ct Fayaz Ahmad on November 10, 2021 at Gulshan Chowk Bandipora. Besides, he was also involved in an attack on Naka party near Nishat Park Bandipora on February 11 in which SPO Zubair Ahmad attained martyrdom while as four other security personnel got injured including three police personnel and an ASI of BSF," police said.

"The other killed terrorist Shahbaz Shah was a hybrid terrorist and was involved in the killing of a civilian belonging to minority community namely Satish Kumar Singh on April 13 at Kakran area of Kulgam. After this attack said terrorist was categorised." IGP Kashmir Vijay Kumar termed this operation a big success and congratulated the joint team for conducting successful operation and eliminating the top wanted Pakistani terrorist.

Incriminating materials, arms and ammunition including an Ak-56 with four magazines, a pistol with a magazine, an UBGL, a Pouch and ID cards of LeT were recovered from the site of encounter. Police have registered a case and investigations have been initiated.