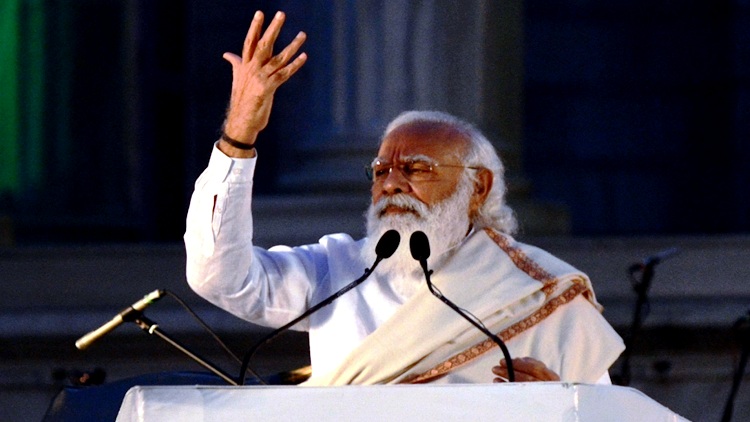 Kolkata: Prime Minister Narendra Modi on Sunday warned the voters of West Bengal to be careful about the ruling Trinamool Congress' secret partners while voting in the forthcoming state Assembly polls.

"We need to be very careful of Trinamool's secret partners while casting votes in the coming state Assembly elections. The Left and the Congress are hand-in-gloves with the Trinamool Congress. If you cast votes to the Left-Congress alliance, it will actually help the Trinamool Congress here," PM Modi said at a rally in East Midnapore's Haldia.

He said that the people of Bengal need to be careful about that. "These three parties mix up together in closed rooms in Delhi and prepare their political strategies to loot poor people. The Trinamool Congress is in connivance with the Left and the Congress," he pointed out.

Attacking the state government over corruption charges, Modi said that people of Bengal now want to get rid of Mamata Didi and her nephew.

PM Modi also addressed the mammoth gathering in West Bengal's East Midnapore district in Bengali, enthralling the jubilant crowd present there at the ground who came to hear him.

Slamming the Trinamool Congress-led state government, he said that people of Bengal welcomed a change and trusted Mamata Didi for a better tomorrow. "But what she did was just a repetition of the Communist Party of India-Marxist (CPI-M)-led Left Front had done to Bengal during their 34-year long regime," he said.

"Today when I'm here at one end of the river Ganga, there has been a disaster at its source in Uttarakhand and people are fighting that out with utmost will. I pray for their courage. I have spoken to the Chief Minister of the state and am constantly in touch with people there. Rescue operation is going on there on a war-footing," PM Modi said.

He also reminded the gathering about the legacy of Midnapore, the land of great freedom fighters like Matangini Hazra, Khudiram Bose and educationist Iswar Chandra Vidyasagar who gave "Barnaporichoy" to Bengalis.

"Bengal had all the infrastructure in terms of port, road and industries. People of Bengal wanted development and modernisation. But what happened to the industries here? How many foundation stones were laid during the last 10-years of the Trinamool Congress government? Today Bengal is lagging behind in terms of economic activities. The main reason of that is politics," he said.

PM Modi also mentioned about the Tamralipta government in undivided Midnapore which had shown the nation a new path. He said that time has come to look into the aspect.

"Bengal has always been a fore runner. The Centre is trying to look into every aspect to develop Bengal - be it airport, road infrastructure, public distribution system. We have allocated funds to improve road infrastructure in the state. Bengal needs a double-engine government for fast-track growth," he said, adding that he was feeling proud to be at Haldia.

‘Mamata gets angry on Bharat Mata Ki Jai, but silent on traitors’

"If someone says 'Bharat Maata Ki Jai' Mamata Didi gets angry but she never responds to those who are spitting venom on the image of India. She keeps mum," Modi said, adding that the Trinamool Congress-led state government has also politicised the police administration in Bengal.

He said that conspiracy theories are being hatched internationally to destroy India. "I want tell them that we will give them a befitting reply," he pointed out.

Calling the state government "corrupt", he said: "The Centre had sanctioned funds after cyclone Amphan. People of Bengal know what has been done to that relief funds that came from the Centre. We sent free ration for the poor people in Bengal but the state government did nothing to distribute that amongst people."

Modi further reiterated the issue of Pradhan Mantri Kisan Samman Nidhi Yojana and slammed Mamata Banerjee for depriving about 70 lakh farmers in the state from receiving the money under the Centre's scheme.

He said that the state government has not provided the bank account details to the Centre so that it can send the money directly to all the farmers in Bengal. "Days are passing by. I promise to you that in the first Cabinet meeting of the BJP government in West Bengal, if we come to power, we will provide the funds to the poor farmers. The pending due will also be cleared," he said.

"People of Bengal love football. I want to say something in that football language. Trinamool has made enough fouls. Now the voters will show them the red car," he said, taking potshots at alleged corruption and extortion by the incumbent Trinamool government.