Ahamed and Zaina have six daughters; all are doctors 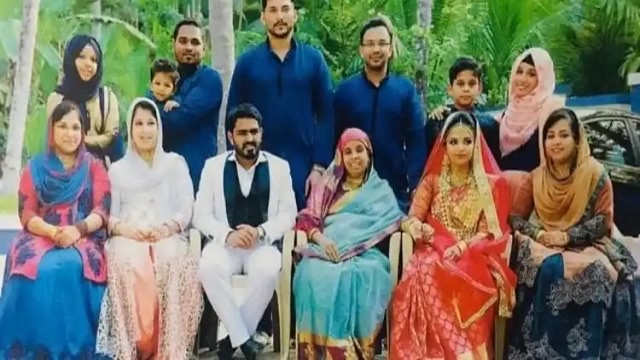 Ahamed Kunhamed Kutty and his wife Zaina Ahmed of Nadapuram in Kozhikode are parents of six daughters and feel blessed to see all of them having come up and some on the way of it as doctors.

The super blessing is that the husbands of four of their married daughters, Fathima, Hajra, Ayesha, and Faiza, are also doctors. When Zaina Ahamed gave birth to six daughters, she has her husband didn’t despair or feel wronged.

They celebrated and thanked Almighty for the blessings. Being a progressive person, Ahamed envisioned a bright future for his daughters. Four of the couple’s daughters, Fathima Ahamed 39, Hajra Ahamed 33, Ayesha Ahamed 30, and Faiza Ahamed are already practising doctors.

At the time, he was managing the family business in Chennai. After the birth of their first daughter, Ahamed went to Qatar with his wife and daughter where he was employed in a refinery. Hajra, who is a dentist as against her sisters opting for the MBBS, recalls how their parents used to sit with them in the evenings in Qatar.

The session would be focused on the importance of doing well in their studies and serving the society. Each day in the evening, the family got together; the parents chatted with their daughters about several things, particularly their studies and their vision of the future. “My Appa liked medicine. When he couldn’t become one he dreamed of making his brother a doctor. But his brother went on to become a teacher and is today a well known Sufi teacher in our village,” Hajra told a reporter. So, naturally, Ahamed linked all his unfulfilled wishes on his next generation and hoped that at least one of his daughters would become a doctor one day. “Fathima opted for MBBS and she took to the course like a duck to water. The positive feedback from Fathima inspired her other sisters also to go in for medicine.

In fact, one of the sisters, Ayesha was interested in law. However, the parents advised her to pursue law after completing her basic degree in medicine. When it was time to get their daughters married, Ahamed and his wife were clear in their choice of medico son-in-law. Theiur logic was that marrying someone with the same profession will be helpful for the young couple.

The family was dead against the practice of dowry or streedhan. The girls should not be valued in term of money, the parents thought. They were keen to marry them to persons who understood and loved them. After working in Qatar for nearly 35 years, the couple with their daughters returned to Kerala. About two years later, Ahamed suffered a heart attack and passed away.

At the time, only two of his daughters were married. Zaina continued to encourage and inspire her daughters to pursue their courses and married two other daughters.

Fathima is presently working in a military hospital in Abu Dhabi. Hajra has sinced returned to Kerala and is planning to do her PG course.

Ayesha is serving in a hospital in Kodungallur while Faiza and her husband work in Kochi. Today, the story looks like a ideal dream sequence; the pain and hardwork of parents and the girls is not known to the rest of the world.

The girls regret that they didn’t click a family picture with their father. However, they say, they continue to carry him in their hearts