Pappu tea stall on Assi road, a favourite hangout for tea lovers, has seen record footfall after Prime Minister Narendra Modi stopped there to have tea. Modi’s halt on Friday during the election campaign has soared its popularity and led to unstoppable tea making.

The Chaurasia Paan shop adjacent to Pappu ki ‘adai’ (Pappu’s tea stall) in the Varanasi Cantonment assembly segment, has also got its moment of fame and business after Modi had a Banarsi paan here.

The roadside tea stall, a 15-minute walk from Assi Ghat, the southernmost ghat in Varanasi, has become almost a place of tourist interest and a selfie point overnight.

A crowded and rather noisy street lined with cafes and shops selling vegetables, groceries, Hindu holy books, Rudraksha, sculptures, and stoneware, lead to the Pappu ki ‘adai’. The kiosk is being run by Manoj and his two brothers, Manish and Satish.

Over the weekend, politicians of different ideologies, student leaders, BJP and Congress supporters, TV crews, and media persons could be seen at the Chaiwalla kiosk. Everybody wanted to know what Narendra Modi, once a chaiwallah, had here. Manoj says they ran out of stocks and had to buy more milk, ginger, and other ingredients. The stall sells coffee, black coffee, tea but is best known for its lemon tea.

Dhruv Srivastava,31, who lives near Benaras Hindu University, said that he has been coming here “365 days for four years to have lemon tea.’’

Sujeet, 27, who sells readymade garments in Sasaram, said From the time the tea shop was set up in 1947 by Manoj Singh’s grandfather, Baldev Singh, an ex-serviceman, it has been a meeting point for people from all walks of life. Manoj who has been sitting in the shop for 30 years says, “We are used to seeing customers sit here for hours on end discussing politics but the experience of serving tea to a Prime Minister who has been a tea-seller, was extraordinary. What can be greater than one Chai wallah serving tea to another chai wallah?’’ said Manoj. 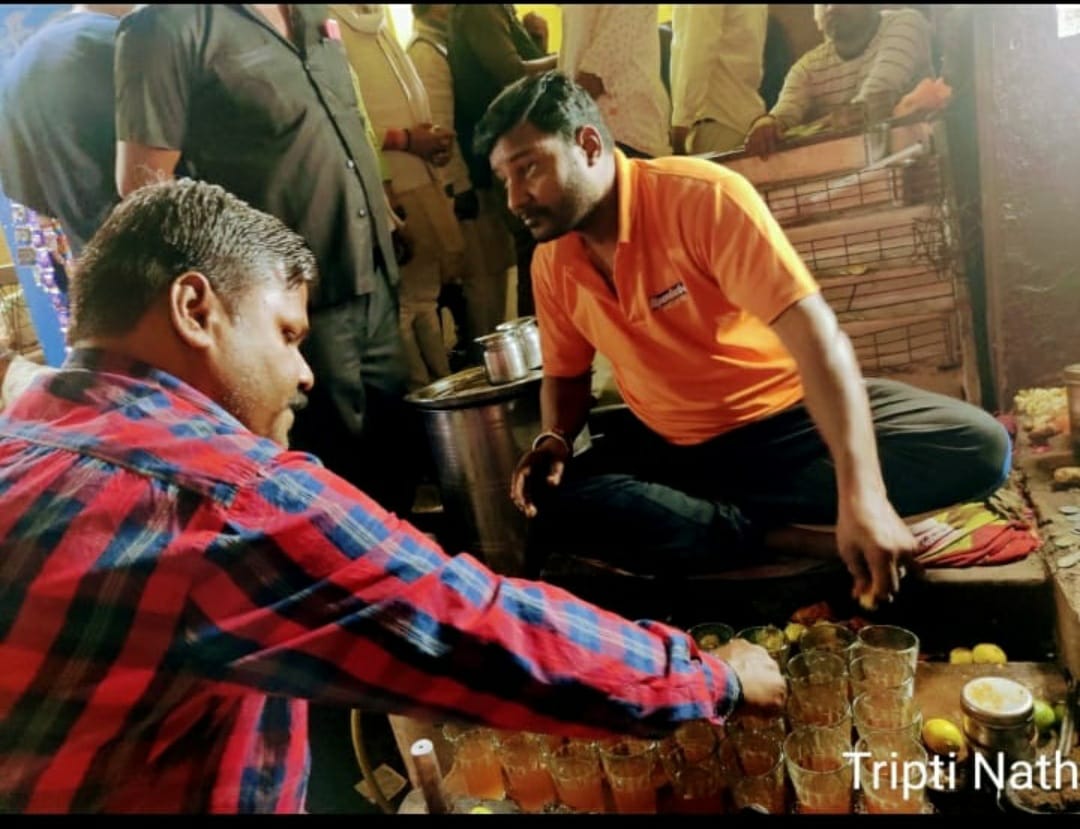 The tea stall is modest. Anand Singh sits at the entrance waiting for the tea to brew in the traditional aluminum kettle. At the same time, he squeezes lemons to make the super popular beverage.

Pictures of gods, goddesses, and saints besides calendars and stickers adorn a board on the tea shop walls painted half yellow, half brown. Two pictures of Modi including the one in which he is being blessed by his mother are impossible to escape any customer’s notice.

When this correspondent visited the shop a day after Modi had tea there, she had to wait outside awhile as it was packed to capacity. There was a huge crowd and when she waded through traffic, she figured out that the crowd had surrounded former Congress MP from Varanasi, Rajesh Mishra who had arrived in an auto-rickshaw to have a cup of tea and discuss politics.

Customers from diverse backgrounds were engaged in animated discussions on how BJP and the Samajwadi Party would fare in the final phase of Assembly elections in Uttar Pradesh. While some said that Modi had served the constituency well, others were critical. Nobody seemed to mind the basic furniture here which is long benches and long tables. The discussions over tea ‘Chai pe Charcha’ kept people occupied close to shop closing time.


Asked if Modi paid for the tea, Manoj Singh, said, “He gave me an envelope.’’ Singh refused to disclose what the envelope had. All he said was, " I have placed the envelope in front of pictures of Gods. His neighbour Gopal Prasad Chaurasia, a graduate from Benaras Hindu University, also got the envelope from Prime Minister but said that he gave it to his wife. Chaurasia’s 27-year-old son, Pawan says, “He is yet to open the envelope.'' 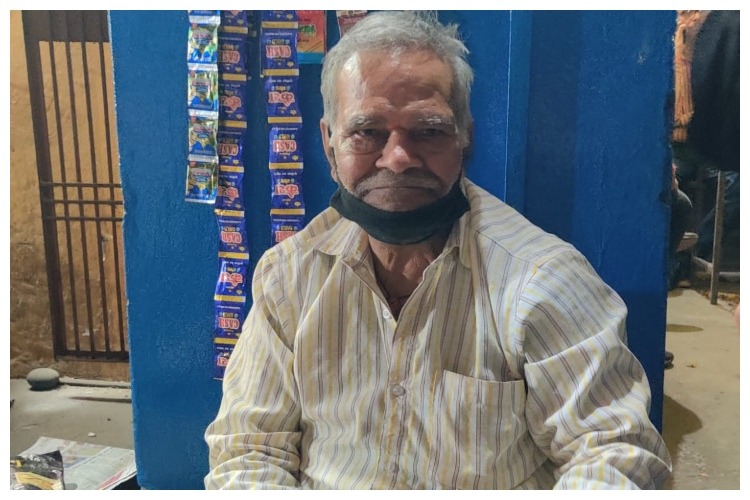 Gopal Prasad Chaurasia at his shop

Chaurasia Paan shop has been running here for four generations and has its share of loyal customers but after Modi's visit, the number of customers has doubled. " It has earned us enormous respect from the public as he came to our doorstep like a common man. We have been getting phone calls from our relatives in Bihar, Delhi, Patna, Mumbai, and Sasaram,' says Pawan.

Recalling the Prime Minister's visit, Pawan said, "We had no inkling that the Prime Minister was coming. It was about 7.45 p.m. Modi spent only five minutes in our shop but I will never forget his visit. He asked for paan. My father was a little nervous as he was dealing with Prime Minister. So, I helped him make paan. We were so overwhelmed that we did not even have time to offer Mr. Modi a chair. When I tried to get up to seek Mr Modi's blessings, he folded his hands and told me to continue sitting. After he made paan with Chuna (lime)' katha' ' laung', 'ilaychi' besides Gulkand, Modiji asked if it had Chuna. Then, he opened the shop and said that he wanted a paan without Chuna. So, we made a paan without chuna.

“If we had known earlier, we would have given him a rousing reception. My younger brother, Yogesh who also sits in the shop is feeling sad that he was not at the shop and missed this great opportunity to meet the PM.''

While Pawan is a graduate, Yogesh is a postgraduate. Both want to continue this family tradition. " Our sweet paan costs only Rs 10 and tobacco paan cost Rs 6. We consider ourselves fortunate that the Prime Minister came to our shop. The Deputy Chief Minister, Keshav Prasad Maurya tweeted about Modi's visit to Gopal Pan Bhandar.'