Athar Hussain and Dhannipur mosque plan
Mansoorudin Faridi/New Delhi
At a time when television news is focused on the Hindu-Muslim differences over their conflicting claims on some religious places, a heartening reality from Ayodhaya, Uttar Pradesh, about the proposed mosque at Dhannipur points to the unchanged scenario of India’s inclusive traditions on the ground.
As the funds are being raised for building a modern mosque complex on a five-acre plot at village Dhannipur that was allotted to Muslims by Supreme Court in the Ayodhya dispute case, those in charge have disclosed that 70 percent of donations for the project have so far come from the Hindus.
This was disclosed to Awaz-the voice by Athar Hussain, Secretary and Spokesperson of the Indo-Islamic Cultural Foundation Trust that is in charge of the proposed modern mosque-hospital complex at village Dhannipur, 50 km from Ayodhya in Uttar Pradesh. 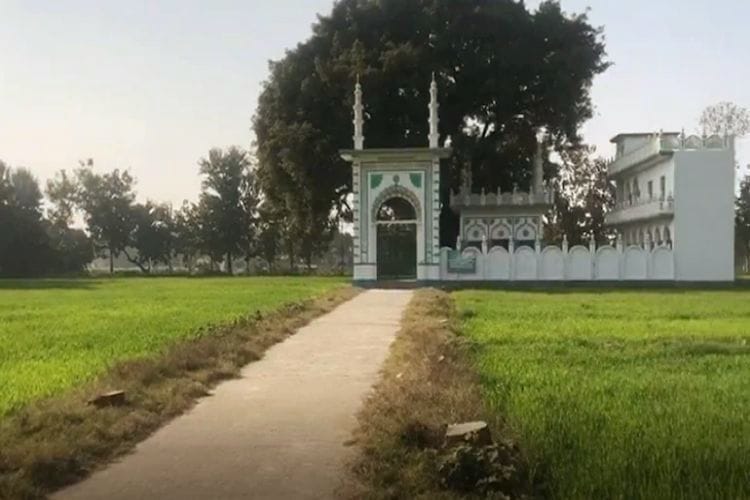 Site of proposed mosque complex in Dhanipur village, Ayodhya, UP
Athar Hussain said that the portal of the proposed Ayodhya Masjid also has an online facility for donation and “we are surprised to see that 70 percent donations have come from non-Muslims and it’s encouraging for us.” In fact, according to media reports, as soon as the land was alloted to Muslims and the IICFT was set up, 60 percent of the callers seeking to donate for the mosque were Hindus.
Hussain however admitted that a lot of paperwork including obtaining no-objection certificates from various departments is yet to be completed for the construction to start.
The Indo-Islamic Cultural Foundation is a trust formed by the Government of Uttar Pradesh and the State Sunni Central Waqf Board for this particular project.
So far, the organizers have used the funds for buying and employing the services of two ambulances and launching the basic medical facilities for the locals during the Covid-19 period.
Athar Hussain says that the progress of the project has slowed down first due to the Corona wave and the death of one of the trustees, Captain Afzal Khan. However, he said, once the documentation is completed, work will start at a rather fast pace.
He however said the biggest problem the Trust faces today is the hiked developmental charges it would have to pay unless the government makes an exception in their case. 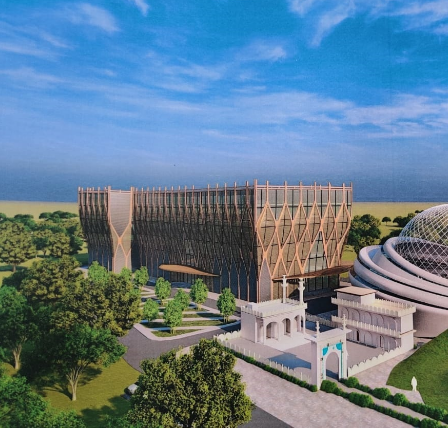 The sitemap of the proposed mosque-complex released by the IICFT
Last year while the plan for the mosque-hospital complex was being finalized, Dhanipur village came under the jurisdiction of the Ayodhya Development Authority. This step would mean higher developmental charges running into several crores.
“We can’t afford to pay such huge money. Also when we took possession of the land it was under the control of the village Panchayat and we would ask the government to charge us at the previous rates,” he said.
The mosque complex will be constructed on 5 acres of land under the supervision of the Indo-Islamic Cultural Foundation Trust.
Athar Hussain said the foundation was trying to get an assessment of the proposed land developmental charges it would have to incur and thereafter it would make a representation to the government for concession.
He said if need be they would meet Chief Minister Yogi Aditya Nath with their request.
Athar Hussain said the construction will begin only after the issue of hiked developmental charges is sorted.
Athar Hussain told Awaz-The Voice that “we will first construct the hospital building so that the OPD can start as soon as possible.”
The project encompasses a mosque, a hospital, a museum, an archive center, and a training center for skill development and Islamic studies.
According to Athar Hussain, this complex will be ideal for worship as well as service to the people. The proposed mosque is the beginning of a new journey toward the future in a new way. 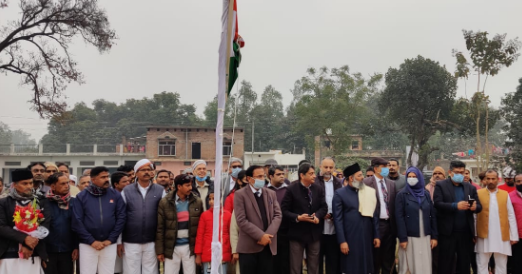 The inauguration of the mosque project at Dhannipur on August 15, 2021
This mosque is based on the basic Islamic teachings that man must strike a balance between religion and the mundane.
It is interesting to note that eyebrows were raised when the prototype of the Dhanipur mosque complex was released since it had no domes and minarets that are conventionally associated with mosques. The organizers said the idea was to give a modern design in modern India.
Interestingly, the Dean of the Department of Architecture, Jamia Millia Islamia, Prof. M. Akhtar, who considers it the most prestigious design project of his professional life, has been involved in all aspects of the project.
He had said that there is no condition of dome and minaret in Islam. The proof of this is present in history. We have to come out of the past. You have to accept the reality. Islam is the religion of every age.
The message of Islam is to keep up with the times. We have to recognize the architecture of the new age. In the past, there were mosques without domes and minarets and still are today. The first mosque in India had no dome or minaret.
The Indo-Islamic Cultural Foundation consists of 9 members. The chairman and chief trustee of the trust Zafar Ahmed Farooqui is also the chairman of the Uttar Pradesh Sunni Central Waqf Board.