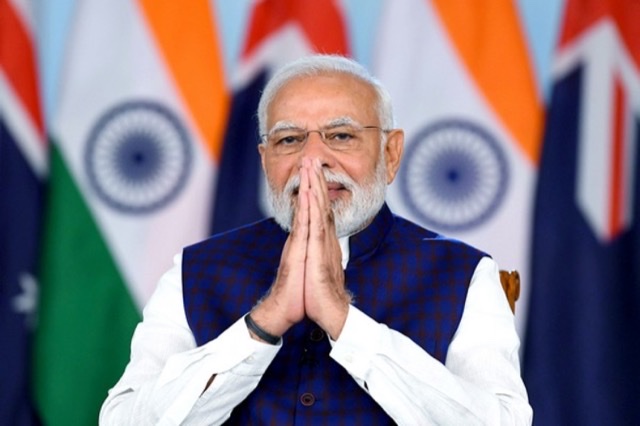 Prime Minister Narendra Modi on Sunday extended greetings to the people of Gujarat on the state's foundation day, saying that Gujarati people are widely admired for their diverse accomplishments.

"On Gujarat's Foundation Day, my greetings to the people of Gujarat. Inspired by the ideals of Mahatma Gandhi, Sardar Patel and several other greats, the people of Gujarat are widely admired for their diverse accomplishments. May Gujarat keep progressing in the coming years," PM Modi said in a tweet.

Gujarat celebrates its state foundation day every year on May 1. On this day in 1960, the former state of Bombay was bifurcated on a linguistic basis which gave existence to two states - Gujarat and Maharashtra. PM Modi, who previously served as Gujarat Chief Minister from 2001 to 2014, visited the state in April and March this year. Elections are due in the state in December and the Bharatiya Janata Party (BJP) is preparing to seek another term in the state.

The BJP is in power in Gujarat since 1995. The Prime Minister held three roadshows in Gujarat during his two-day visit to the state in March, a day after the results of the Assembly elections in five states. The BJP managed to retain its power in four states -- Uttar Pradesh, Uttarakhand, Goa and Manipur. During his three-day visit in April, PM Modi laid the foundation stone of various developmental projects, including the WHO Global Centre for Traditional Medicine in Jamnagar.

He also inaugurated the Global AYUSH Investment and Innovation Summit at Gandhinagar. Meanwhile, the Prime Minister also wished the people of Maharashtra on state foundation day and prayed for their prosperity.

The Bombay Reorganization Act came into effect on May 1, 1960, as a result of several protests and movements that demanded the creation of an individual state.

PM Modi also extended greetings to the people of Gujarat on its foundation day today, saying that Gujarati people are widely admired for their diverse accomplishments. May 1 is also celebrated as International Workers' Day in celebration of labourers and the working classes.