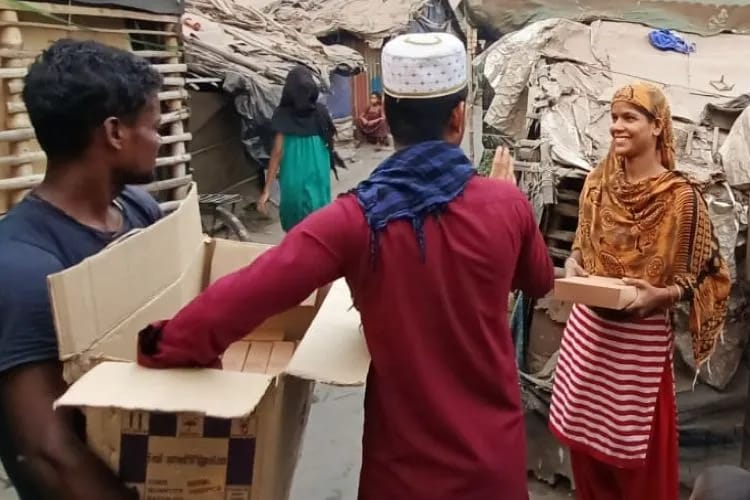 The Human Welfare Society volunteers distributing food packets
Mansooruddin Faridi/New Delhi
If you happen to walk on the main road in the Delhi'a Muslim neighbourhood of Jamia Nagar, or are on a rickshaw rushing home to beat the deadline for Iftar in the month of Ramazan, there is a good chance that someone would hand you over a packet of food to help you meet your religious obligation.
In the same way, hundreds of Iftar food packets have been delivered to the needy people in different settlements of Okhla this Ramazan.
These volunteers are deployed at five points of Jamia Millia and Okhla Basti, and their mission is to provide a quick meal to those in a hurry, who is resourceless, or destitute.
This campaign by some young men has galvanized the entire community in the Muslim neighbourhood of the Jamia Millia area this year.  There is a competitive spirit of help and a passion for service.
The programme run under the banner of Project Ehsas saw volunteers going door to door to provide food for the needy. The group also organized mass Iftar to inculcate unity in the community. This month, the group has provided more than 30,000 meals to people for Iftar.
Project Ehsaas launched under the aegis of the Human Welfare Foundation was launched in October to provide food to the homeless and displaced persons.

The mission of providing Iftar to such people is going on successfully at five different places of Jamia Millia, where iftar is given to passers-by and those who do not reach their homes. Some students are unable to arrange Iftar due to time or busy schedules. Iftar is being served to them too.

This Ramazan, the Human Welfare Foundation has been providing Iftar meals to at least 800 people daily. This has benefitted a lot of students who are unable to cook for breaking the fast. 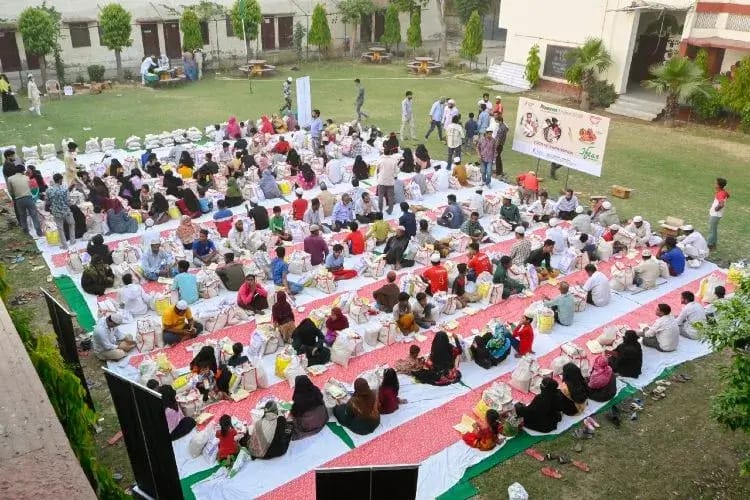 A community Iftar organised in Okhla, New Delhi
Project-Ehsaas runs a community kitchen in the Kangchenjunga area. The place is full of volunteers as the food is prepared and packed here. The volunteers include women and students of Jamia Millia Islamia University.
According to Muhammad Islam, the foundation started mass distribution of food for the migrant labourers who were stuck in Delhi without work during the first wave o the Covid pandemic.
What was earlier served as a mid-day meal  has since been changed to Iftar during Ramazan

He said this initiative is being carried on with great enthusiasm. “Everyone is experiencing peace by joining this campaign,” Muhammad Islam told Awaz-the Voice. He said the decision to distribute iftar meals was taken given the reality that a large section of people faces difficulty in breaking the fast due to different reasons.

Some have personal reasons, others are tending to someone in hospital, students away from their homes, and street people with no means who need the support.

Hosting an Iftar in a Jamia locality
The Foundation is also working in Kolkata where daily 400 food packets are being distributed.

Islam says that this initiative is showing a very positive impact.”We have been able to connect local students with us.” Besides, many volunteers of local NGOs also played a supporting role. The volunteering experience was useful for students of Jamia Millia Islamia.

He said that the Supreme Court has advised the government to take the help of community kitchens to fight hunger and poverty. Qasim Raza, another volunteer says the campaign has gained popularity from day one.“We all felt comfortable helping the needy. It’s teamwork. Everyone has their work or responsibility. Each one of us is in charge of the preparation of food, packing, and delivery.“

Locals are praising the Foundation for this initiative. Zaheer Alam, a resident says he could not reach home on time for the iftar when suddenly a helping hand appeared for him.