When 1000 drones dazzled the Indian sky Drone make a map on India on the sky

In a first, a grand drone show dazzled the sky above the national capital at the Beating Retreat ceremony held at Vijay Chowk on Saturday that also showcased martial musical tunes with Indian fervour.

The 10-minute show involved 1,000 drones fabricated through indigenous technology with synchronised music playing in the background.  The drones lit up the sky in various patterns including India's map on the globe, the Tricolour and the lion symbol of 'Make in India'.

A mega drone show involving 1000 drones lit up the sky today during the Beating the Retreat ceremony. #BeatingRetreat pic.twitter.com/YYbvTVLYHR

what a Magnificent sight !!

Martial musical tunes with Indian fervour were also the flavour of the ceremony.  Twenty-six performances enthralled the spectators with foot-tapping music played by the bands of the Indian Army, Navy, Air Force and Central Armed Police Forces (CAPF).

The famous number sung by Lata Mangeshkar that brought tears in many eyes Ay mere watan kee logon.. and Rabindra Nath Tagore’s s ekla chalo re were also played by the bands.

Abide with me replaced by a song that made our First PM Jawahar lal Nehru emotionalhttps://t.co/LjLl0mJdOq
Ay mere watan ke logon is a song that moves us to tears and is thus a true tribute
Can anyone share any evidence where Gandhi said Abide with me is the only song he liked pic.twitter.com/BZ3mmgTCtb

The 10-minute drone show involving 1,000 drones fabricated through indigenous technology was flown up with synchronised background music. The drones light up various patterns including India's map on the globe, Mahatma Gandhi, Tricolour and the lion symbol of 'Make in India'. Further "Azadi ka Amrit Mahotsav" was displayed during the show.

The drone show was organised by a startup 'Botlab Dynamics' and supported by the Indian Institute of Technology (IIT) Delhi and the Department of Science and Technology.  The drone show was conceptualised, designed, produced and choreographed under the 'Make in India' initiative.

'Beating the Retreat' is a centuries-old military tradition dating from the days when troops disengaged from the battle at sunset. As soon as the buglers sounded the retreat, the troops ceased fighting, sheathed their arms and withdrew from the battlefield. It is for this reason that the custom of standing still during the sounding of retreat has been retained to this day. Colours and standards are cased and flags lowered at retreats. 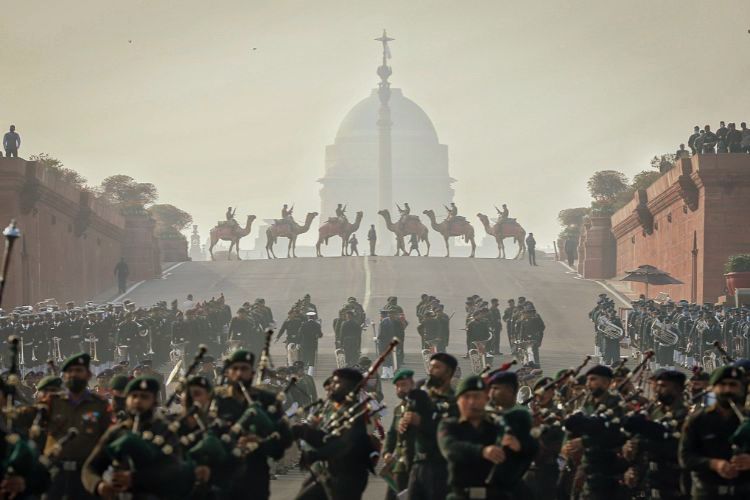 Drumbeats recall the days when troops, billeted in towns and cities, were recalled to their quarters at an appointed time in the evening. Based on these military traditions, 'Beating the Retreat' ceremony creates a mood of nostalgia of the times gone by.

The colorful batting retreat had mesmerized people with its military tunes as well as its heavenly display of technology. When a thousand drones showed their charisma in the sky, people were forced to press their fingers under their teeth.

The batting retreat at Vijay Chowk was a major focus as the laser show enhanced the beauty of Vijay Chowk.

President Ram Nath Kavand attended the function as the chief guest. He was accompanied by Prime Minister Narendra Modi. PM Modi, Defense Minister Rajnath Singh was the first to arrive to receive the President.